When Peter Morgan sat down to write a script about former Formula One driver Niki Lauda, the 64-year-old racing legend had only a couple of requests for the screenwriter of “The Queen” and “Frost/Nixon”: Don’t make me look gay, and get me to the Oscars.

The result of Morgan’s work, Ron Howard‘s movie “Rush,” clearly accomplished the first of Lauda’s requests in its portrayal of the egotistical Austrian driver’s epic battle with British racer and playboy James Hunt in the 1976 Formula One season, which included Lauda’s return to the car only weeks after suffering severe burns in a horrific crash.

As for the latter – well, the film has won rousing ovations at many of its screenings, including a huge gala at the Toronto International Film Festival, which Lauda flew in from Europe to attend.

“It was worth coming, I’ve got to tell you,” Lauda told TheWrap in a Toronto interview the morning after the gala. “I came in from Vienna yesterday just in time for the end of the movie, and I’ve got to fly out this afternoon to be back there by 6:00 tomorrow morning – but it was great to see.” 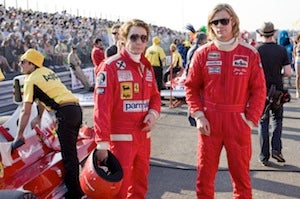 Lauda, who is played by German actor Daniel Bruhl in the film, said he had been approached by many other filmmakers before Morgan, who also lives in Vienna and who told TheWrap, “Niki hit on my wife about 30 years ago, before I ever met her. She turned him down, but they remained friends, so I met him a few times over the years.”

During those years, Lauda, who is currently chairman of the Mercedes Formula One racing team, was regularly asked if he’d cooperate on films about his life and racing career, which included three F1 championships, two after the crash that left him with injuries that are still visible.

“There were a lot of approaches, but they were not interesting at all to me,” said Lauda. “Some were documentaries, and I don’t like those. I always thought documentary was another word for nothing, to be honest. So I never bothered with those.”

But when Morgan approached him, Lauda reconsidered. “I knew who he was and what he was doing, and he’s a top scriptwriter. He said if I helped him make a script about the ’76 season, he would find people who were interested in making the movie. And I thought that was an interesting idea, that one season.”

Morgan was no stranger to writing scripts and plays about real people: In addition to his Oscar-nominated screenplays for “The Queen” and “Frost/Nixon,” he has written “The Deal” and “The Audience,” both about British politics, and “The Last King of Scotland.”

Morgan told TheWrap that he generally avoids getting to know the people he writes about – David Frost, he said, “hated what I did and hated me until he saw that ‘Frost/Nixon’ was a success” – and his pitch to Lauda was blunt. (Hunt, played by Chris Hemsworth in the film, died in 1993.)

“I said, ‘I want to stay friends, because this is a small community, but I’m not going to write a love letter.’ I was really honest with him – I said, ‘You’re going to f—ing hate what I write. It will be painful. But I guarantee you, if you allow us to do our job, it will have unexpected consequences that I can’t predict that will affect your legacy. On balance, I would say that it’s a painful journey to go on, but I would go on it, because I can assure you that I don’t have bad intentions.'”

Morgan laughed. “And he said, ‘Okay, as long as you don’t make me look like a poof, it’s good.’ He didn’t give a s— that he’s rude and offensive to almost everybody in the movie – the only thing he was worried about was his heterosexuality.” 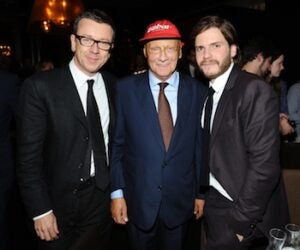 Neither Lauda nor Hunt come across like paragons of virtue in “Rush,” but they are such fascinating characters that the film just might help Morgan fulfill a promise to Lauda.

(Left to right: Morgan, Lauda and Bruhl in Toronto)

As Morgan remembered it, the conversation – which took place when the screenplay was just a spec script without a director or studio attached – went something like this:

Lauda: “Are we going to the Oscars?”

Morgan: “I don’t think so, Niki. No one’s going to the Oscars with this movie.”

“Why? Are you s—? Should I be doing this with someone else? Are you a loser?”

“I’m just trying to write the screenplay, Niki. I don’t even know if we’re going to get the movie made.”

“I’m not doing this unless 100 percent I’m going to the Oscars.”

“OK Niki, we’re going to the Oscars. That’s a promise.”

“Can I go and get myself a tuxedo?”

“Yes, Niki, get yourself a tuxedo.”

“Good. I’ve got a young wife.  She thinks this s— is interesting. I think it’s a waste of time, but I want to make her happy. So don’t let me down.”

Morgan shook his head and laughed. “I promise you, that’s what it’s like with Niki.”