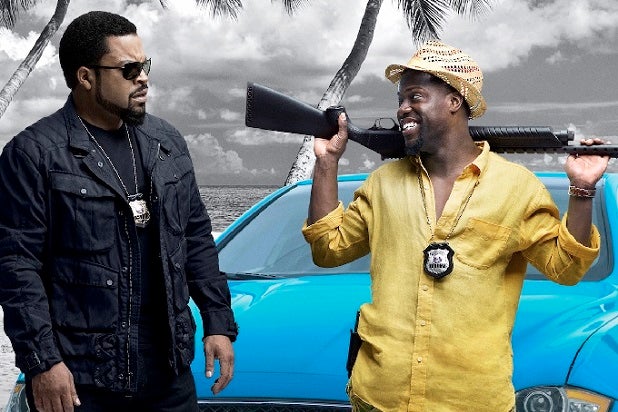 With a score of 15 percent on Rotten Tomatoes, critics are calling “Ride Along 2,” the sequel to 2014’s film starring Ice Cube and Kevin Hart, “as funny as lead poisoning” and “a painfully unfunny action farce” that literally recreates the same story line with the same characters from the first movie.

TheWrap’s Alonso Duralde agrees that the movie is a “retread of the already listless events” from the first movie, saying that “the film’s most genuinely funny moment involves A.J.’s ringtones, which should perhaps come as no surprise — the stakes, and the laughs, are so small that ‘Ride Along 2’ was apparently designed to be watched on your phone.”

The original “Ride Along” has a score of 18 percent on Rotten Tomatoes, but still made $135 million at the domestic box office. One critic suggests that “Ride Along 2” will follow the same pattern, and that a “Ride Along 3” will probably be in the works soon. TheWrap’s Todd Cunningham believes that “‘Star Wars: The Force Awakens’ probably won’t be able to hold off Kevin Hart and Ice Cube‘s ‘Ride Along 2’ from taking the No. 1 spot at the box office this weekend.”

Also Read: 'Ride Along 2' Review: Kevin Hart and Ice Cube Are Mugging in Miami in This Listless Sequel

See nine of the most merciless reviews below.

“To call ‘Ride Along 2’ rubbish is unfair to rubbish, which at some point had a purpose. This movie has all the focus of a housefly, the thrills of an EPA manual, the edge of a billiard ball. It’s as funny as lead poisoning, as deep as a fingernail, as imaginative as a pothole. I didn’t like it.”

“There’s at least one good scene in which Hart’s character — who’s addicted to video games — triumphs in a harrowing chase by remembering his strategies from his favorite ‘Grand Theft Auto’ sessions. The problem is those video games have more heart than this movie. And a much smarter sense of what they’re really all about, and the honest source of their own appeal. Hart may be playing dumb, but it’s the filmmakers who don’t have a clue.”

“‘Ride Along 2’ is a painfully unfunny action farce that can’t even live up to the meager pleasures of its predecessor… The original ‘Ride Along’ was a pretty terrible movie that scored just enough laughs to justify a recommendation. Sadly, ‘Ride Along’ 2 is 0/2, with pretty much the same paint-by-numbers plotting and significantly fewer chuckles. What’s most distressing is that it basically repeats the character relationship and character arcs of the first film, existing as if the first picture never happened. The core Ice Cube/Kevin Hart relationship is almost identical to what it was at the start of the first film, and the as a result Hart’s clownish antics come off as sad and depressing.”

“This laid-back amusement should not be misinterpreted as competent storytelling. Though some of the jokes land, that’s entirely due to the performances; there’s not one example of clever writing in the entire picture. The cop elements of ‘Ride Along 2’ are so ludicrous you could easily intercut Ice Cube‘s scenes from the satire ’22 Jump Street’ and few would be the wiser.”

“With a script that’s about as inventive as the title, ‘Ride Along 2’ does little more than rehash the formula that two years ago teamed Ice Cube and Kevin Hart in an amiable if unambitious action comedy. Though a fresh setting and a couple of new characters might slightly broaden the sequel’s demographic appeal, this cruising speed buddy cop outing isn’t likely to earn the would-be franchise many new fans.”

“‘Ride Along 2’ is the kind of movie that’s best watched in the comfort of your own home, preferably for free and while consuming alcohol … It’s not without an occasional laugh or two — I stress ‘occasional’ — but ‘Ride Along 2’ lacks emotion, runs long and doesn’t precipitate enough laughs to justify the price of admission.”

“‘Ride Along 2’ basically delivers exactly what fans of the original movie might expect, but even if he’s not even remotely the worst part of the movie (and he’s made far worse movies than this), by the end of the film, you’re likely to want to shoot Kevin Hart in the face yourself.”

“Movies may not write themselves, but the script to ‘Ride Along 2’ feels close to automatic: giant parties on yachts and in nightclubs, a car chase so rote it becomes its own computer game, confrontations and shootouts that even the characters note are pointless. You could say that the movie’s container shipyard explosions, crashes in parking garages and backyard chases are ironic takes on an earlier generation of low-budget action movies (like Ice Cube‘s ‘All About the Benjamins’). Perhaps they’re an attempt to cash in on Universal’s ‘Fast and Furious’ franchise (which explains Gibson’s bit part). Or maybe they’re just cheap, lazy shortcuts by filmmakers who think their viewers don’t deserve any better.”

“Straddling the line between flat-out farce and buddy-cop action movie, ‘Ride Along 2’ is a slick, good-looking, fast-paced and profoundly unoriginal piece of work. This is 100 minutes of recycled shtick — a cop film with no roots in actual police work, but a deep connection to dozens of other cop films. From the supervisor chewing out the rogue cops to the slick businessman who’s actually a crime lord to the obligatory big finale on the docks, ‘Ride Along 2’ is the movie equivalent of a cover band. We’ve seen it all before, and often in much better films.”