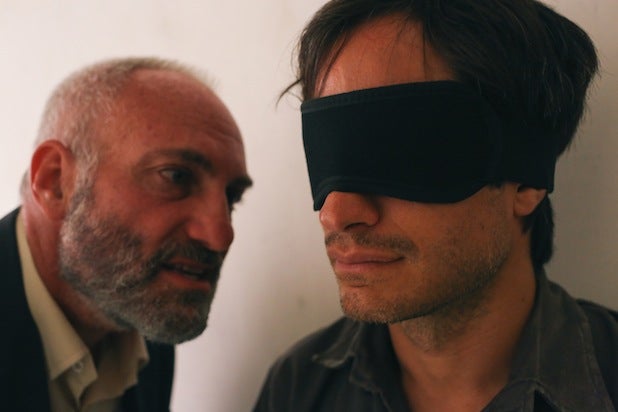 Jon Stewart fans, here’s the bottom line: Stewart’s debut as a movie director, “Rosewater,” has little in common with his Emmy-winning day job as host of “The Daily Show With Jon Stewart.”

That’s good in some ways, and not so good in others.

“Rosewater,” which is expected to premiere at the Telluride Film Festival this week before screening at the Toronto International Film Festival on Monday, is a solid, quietly involving work about political turmoil in the Middle East, and the toll it takes on a free press. Like much of Stewart’s work, it’s smart and it points fingers in directions in which they need to be pointed.

But the film understandably sets aside Stewart’s trademark barbed humor in a story that needs to be told without mockery or laughs, and it’s also more earnest than Stewart’s TV fans might expect. And for much of its running time the film is not quite as sharp or energetic as you’d hope, possibly because Stewart the director is hardly the master the way Stewart the TV host is.

Written and directed by Stewart and based on the Maziar Bahari book “Then They Came for Me,” the film tells the story of reporter Bahari, who went to Iran to cover the 2009 presidential election for Newsweek magazine. When Bahari (played by Gael Garcia Bernal) raised questions about the landslide victory claimed by Mahmoud Ahmadinejad, he ended up in Evin Prison for 118 days, accused of being a spy planted by the West to manipulate Iranians into questioning the valid election results.

The film hinges on the relationship between Bahari and his rosewater-scented interrogator (Kim Bodnia), who’s been told that the journalist/spy is a big prize whose confession must be extracted by any means necessary. Although Bahari rarely sees his tormentor’s face, the film goes out of its way to give us glimpses of the man known only as “Rosewater,” including a brief scene in which he’s humanized via a phone conversation with his wife during which he pleads that everything will change after he delivers this big confession.

Still, “Rosewater” is not really the story of the man from whom it draws its title. This is Bahari’s story, and Bernal delivers a strong, haunted performance as a man who begins hallucinating conversations with his dead wife and sister, both of whom were imprisoned by previous Iranian regimes.

(I’ll leave it to others better versed in the nuances of accents to decide whether the Mexican actor convincingly portrays the Iranian-born Bahari; In a film in which characters speak English most of the time regardless of what their native tongue is, he passes muster.)

The film is deliberately paced, even slack, in the early going, and it surprisingly stays that way even after Bahari’s imprisonment. Stewart emphasizes the tedium of imprisonment, not the terror; Bahari’s greatest fear is not to be tortured, but to be forgotten. It’s a key choice and an affecting one, albeit one that deliberately robs the storytelling of some momentum.

The journalist eventually confesses to being a dupe of “the Western capitalist machine,” thinking that will free him. It doesn’t, but international pressure mounts.

Stewart tells the story cleanly and effectively with the help of cinematographer Bobby Bukowski, editor Jay Rabinowitz and producers and , though he’s clearly not yet a cinematic stylist. His fancier touches – such as graphics showing the reach of social media to raise awareness of Bahari’s plight – aren’t terribly original, and he certainly loves using title cards to make sure we know the whats, wheres and whens of each scene.

Things get livelier in the film’s second half, though, including some sly exchanges about Stewart’s home state that will likely draw laughs from those familiar with its director’s comic voice.

(Interrogator: “Three times you visited New Jersey. Why?” Bahari: “I have a very good friend who lives there… He likes it there, what can I do?”)

And “Rosewater” hits a deliciously surreal note when Bahari begins to drive his captor crazy by fabricating stories about how his globe-trotting journalism was really a cover for an addiction to sensual massages. If one is to believe “Rosewater” — and in this case, I really want to believe it — there’s at least one jailor in Iran who now believes that Fort Lee, New Jersey is a hedonistic sexual playground of staggering proportions.

Those scenes, and others in the movie’s homestretch, have an energy, style and flair that is sometimes lacking in the rest of the film. The final scenes then return to a more earnest approach as they pay tribute to the journalists imprisoned around the world “for the crime of bearing witness” – but then, a little earnestness may be what this material needs, even if it’s not what we’ve come to expect from Stewart.