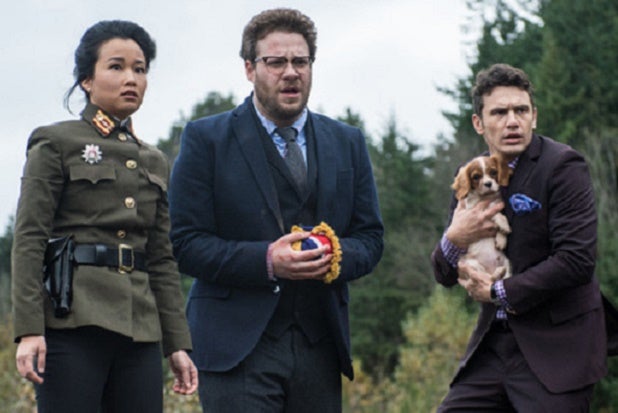 “The Interview,” the Seth Rogen-James Franco comedy at the center of the Sony Pictures hacking scandal, took in a record $15 million from online downloads over its first four days, the studio said Sunday.

The controversial comedy was rented or purchased online more than 2 million times through Saturday, on all of its online digital distribution platforms. That’s the most ever for a Sony film, the studio said.

Sony made “The Interview” available online across the United States at 10 a.m. PT on Wednesday to rent on Google Play, YouTube Movies, Microsoft’s Xbox Video and its own dedicated website at a rental price of $5.99. The film was also available for purchase for $14.99. Online distribution was expanded to Canada later that same day, which was Christmas Eve.

Hollywood is watching the returns from the various streaming sites closely, because this is the first time a major studio release has opened in theaters and been made available for online downloads on the same day. It’s not an unusual strategy for smaller niche films, however, and online streaming availability is frequently a part of platform releases for low-budget indies.

Film companies typically keep returns from video on demand private. There have been a few small hits however. “Snowpiercer,” from the Weinstein Company’s Radius label, roughly doubled its $4.5 million box office haul with VOD when it was released in June.

Sony’s day-and-date digital strategy wasn’t entirely by design, and it won’t necessarily offer an accurate gauge of the impact of a concurrent online release on a movie’s theatrical opening, because it was such an unusual circumstance.

On Wednesday, the studio reversed itself and, under pressure from President Obama and Hollywood creatives, decided to release the R-rated comedy about a plot to assassinate North Korean leader Kim Jong-un, on Christmas Day.

The major theater chains, which on Dec. 18 became the first to opt out of the original nationwide theatrical release after terror threats from hackers behind the Sony cyberattacks, stayed out of the second rollout as well to protest the decision to offer it online at the same time. The largest exhibitors, including AMC, Regal and Carmike, have fought the idea of day-and-date releases for years, convinced it would cut into their business significantly.

That left Sony to roll it out in 331 independent and mainly smaller theaters, and it took in $2.8 million over the holiday weekend after opening to $1 million on Christmas Day. were reported at many theaters, many of which heightened security.

The film’s opening theatrical haul was respectable given the challenges it faced, but hardly a blip on the box-office radar. And it’s far less than the $20 million-plus “The Interview” was projected to make when it was scheduled for a Christmas Day rollout in up to 3,000 theaters. But on Sunday, Sony and the film’s co-director and star said they were thrilled.

Sony’s President of Worldwide Distribution Rory Bruer added that the top priority of the unconventional release was to give people the chance to see the film.

“While this is a completely unprecedented circumstance without proper comparisons, we are very pleased with how it is doing both theatrically where we are seeing numerous sell-outs across the country, and online where it remains at the top of many charts,” he said. “Most gratifying of all is hearing how people banded together to watch the film and have a good time.”

The $17.8 million combined from online and the box office is a start, but won’t offset its $45 million budget and the equally expensive marketing campaign for “The Interview,” which ran its cost to Sony up to roughly $90 million.

On Sunday, iTunes said that it would be offering the R-rated comedy as well, and that should goose downloads. And it’s possible that other independent theaters may want to jump in and offer “The Interview” while it’s still riding the crest of media attention, so it may be able to build on its opening and the accompanying publicity.

President Obama and the North Korean government have been going at it with dueling statements since Sony decided it would reverse itself and release the “The Interview” after all.