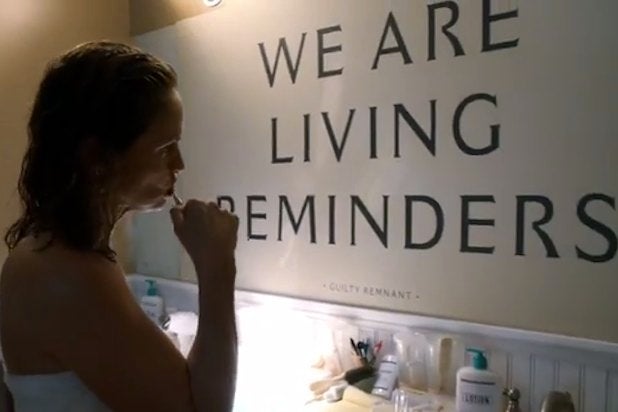 Following the “Game of Thrones” finale earlier this month, HBO is hoping Damon Lindelof‘s “The Leftovers” can continue arming its cannon of critically-acclaimed drama. And according to many critics, the “Lost” creator’s latest crack at serialized drama is a solid summer series that will haunt viewers as it guides them through the Rapture.

The series, co-created by novelist Tom Perrotta and based on his book of the same name, has garnered 65 percent approval rating on Rotten Tomatoes ahead of its premiere on Sunday.

“The Leftovers,” an ensemble anchored by Justin Theroux‘s police chief character and co-starring Liv Tyler, takes place in a New York town three years after 140 million people mysteriously vanished during an international event referred to as the Great Departure.

TheWrap‘s Diane Garrett wrote the series “grapples with that conundrum, and what it means to survive an inexplicable event, to inconclusive affect,” and noted viewer interest depends on their curiosity about the afterlife.

“The show is drawing early comparisons to ‘Twin Peaks’ and HBO’s own ‘True Detective’ for its offbeat and moody storytelling. There’s a key difference, though: The earlier shows were rooted in horrific murders, while ‘The Leftovers’ attempts to wrestle with metaphysical puzzles,” Garrett wrote in her review. “Viewers’ patience for the show and its dreamlike pace will likely depend on their appetites for soul-searching about the afterlife.”

Huffington Post critic Maureen Ryan found the series hard to review due, but interesting to watch, due to its commitment to exploring “big questions” it may never be able to answer through the strong characters asking them.

“‘The Leftovers’ is the hardest kind of show to review. Aspects of it are intriguing and commendable, and among its virtues is a deep commitment to the examination of difficult mental and emotional states. It’s trying, but in this sentence, I’m using that word as a verb,” Ryan wrote. “‘The Leftovers’ is somber and often sad, yet it’s also sincere and willing to ask the big questions. ‘The Leftovers’ is interesting television, even if, in the early going, it’s not quite sure of what it wants to be or where it wants to go.”

Deadspin critic Ryan Leas pondered why America — a country in which “God we Trust” — has yet to see a “great show” built on something as mystical and divisive as religion, but has high hopes “The Leftovers” will be the first.

“It’s odd that we still don’t have a Great Show that uses religion as the engine itself. It remains to be seen whether HBO’s new The Leftovers will be one of those Great Shows. Having only seen the premiere, I love most of it, and I’m looking forward to seeing more,” Leas wrote. “What does immediately stand out is that it markedly defines itself against a lot of the other stuff out there. It’s unrelentingly bleak, which is nothing new, but its specific brand of bleakness is really unrelenting at the same time as being more intimate and small-scale than, say, the humanity-is-the-real-source-of-all-evil brutality of ‘Game of Thrones.'”

Also read: ‘Game of Thrones’ Star Reveals Who Won’t Be Back From the Dead

New York Times critic Alessandra Stanley recognized the series’ “intriguing premise that is intelligently and artfully presented,” but is weary if viewers can “trust” in the direction it is heading, thanks to Lindelof’s inability to wrap up loose ends by the finale of “Lost.” Still, explaining why or how 2 percent of the world’s population disappeared may not even matter in the end.

“This series may never explain what happened to the people who disappeared, but the measure of its worth is that it may not have to. As with any good drama, the mystery lies in human nature more than in the supernatural,” Stanley wrote. “Once the show gets going, and it takes more than one episode to do so, ‘The Leftovers’ bores into the characters and the fissures that crack their community so astutely that the cause is almost secondary.”

“Though it is expertly made, with evident commitment and passion and art behind and before the camera, I also found it on the whole frustrating and unsatisfying,” Lloyd wrote.