You’ll find many mysteries in Mark Mylod’s gourmet horror comedy “The Menu,” not the least of which is the impenetrable enigma of whether or not Mylod even likes gourmet food. The film is full of mouth-watering images of tasty morsels, but the cast is almost exclusively populated by foodies who, according to the screenplay, don’t deserve to live, let alone eat fancy things.

So what’s the point of showing all these yummy comestibles if the movie is going to judge us harshly for wanting them? The biggest joke seems to be on us, the audience for any art. We are consumers, we are fans, and we are arguably unworthy of the enormous talents and unfathomable sacrifices made by the people who serve us. “The Menu” may serve up dark humor and memorable violence, but the daily special is you and me; we’re already in a boiling pot, oblivious to how thoroughly we’re being cooked.

“The Menu” stars Anya Taylor-Joy as Margot, a no-nonsense woman on a fancy dinner date with the insufferable Tyler (Nicholas Hoult, who is giving off serious Peter Lorre vibes at this point in his career). They’re traveling to a remote island where the legendary Chef Slowik (Ralph Fiennes) serves only the fanciest meals to the fanciest people, like a snobby food critic (Janet McTeer), her pathetic toady (Paul Adelstein, “The Greatest Beer Run Ever”), and a dwindling movie star (John Leguizamo). 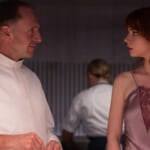 Also Read:
Ralph Fiennes Is a Sadistic Chef With a Taste for Blood in ‘The Menu’ Trailer (Video)

Throw in some a-hole tech bros and a wealthy couple who can barely stand to look at each other, and you’ve got, with the exception of Margot, a clientele that’s practically banging their silverware on their tables, demanding for their uppance to come, preferably on a silver platter.

Chef Slowik and his staff, led by fiercely loyal manager Elsa (Hong Chau), have a series of dishes planned for their guests, each more sinister than the last. And while some audiences may be surprised that certain, rather obvious, culinary horrors aren’t on the chopping block today, Mylod’s film (written by Seth Reiss and Will Tracy) isn’t about mere ghoulishness. The terrors are all whimsical intellectual exercises, not unlike the high-concept dishes you’d find at an egregiously expensive restaurant run by an eccentric auteur with final cut on every plate.

It doesn’t appear we are supposed to be abjectly terrified by any one part of “The Menu.” The film’s knowing dialogue and many self-criticisms, mostly courtesy of Margot, prevent the film from being truly frightening. Unless of course you’re wealthy, in which case the movie argues “good riddance.” The rest of us are invited not to dine but to watch Chef Slowik deliver divine judgment on behalf of all service workers everywhere, somewhat oblivious to his own hypocrisy, since he’s leading his own employees inexorably to a horrible fate too. 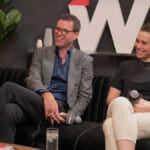 Also Read:
‘The Menu’ Director Mark Mylod on Shift From ‘Succession’ to a Twisted Satire on Fine Dining (Video)

Mylod’s film is incredibly particular, as it should be, since it’s about very particular people. The island where Slowik’s restaurant resides is distinctly uninviting, as though the shooting location for Ray Kellogg’s “Killer Shrews” has been pulled out of mothballs after 63 years, looking just as lifeless as ever. But nestled away is a restaurant that’s sharp, elegant and clearly impeccable, and the dishes Slowik creates range from genuine culinary fascinations to garishly high-concept. (If anyone survives the night, the Yelp reviews are going to be murder.) Production designer Ethan Tobman (“Free Guy”) and art director Lindsey Moran (“The Old Man” do a lot with relatively little, and their work is spot on.

Ralph Fiennes knows exactly what movie he’s in: a bleak comedy where he’s simultaneously the audience’s arbiter of vengeance against the worst of the 1% and also the clear-cut villain. He doesn’t just chew the scenery: He savors it, delivering each new course with a weird monologue delivered with sincerity, sadness and wit. You may find yourself, as Chef Slowik does, announcing your family’s next meals with a melodramatic clap of your hands. Your family may get tired of this quickly and give you withering glares until you stop it. This critic may or may not know this from experience. You have been warned. 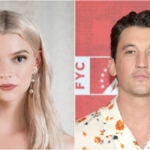 There is a moment in “The Menu” where Slowik, so impassioned about his own art, takes a moment to acknowledge that other art exists, and that it exists to nourish our souls when we’re feeling depleted. It is at that moment that “The Menu” itself becomes a harsh critic, but there’s no hypocrisy in that. We look to art for existential sustenance, to feel less lonely, to feel inspired, to feel, feel, feel, in a world that wears us down to numbness.

And while Mylod’s film may be a wee bit harsh on foodies and fandoms, ever so slightly, it’s a point well taken. We’re paying these hard-working artisans, of all varieties, to deliver us evidence that life is worth living, and it’s very reasonable to ask them to take it seriously. Which makes it all the more important that we treat them, in turn, with the absolute respect they deserve.

“The Menu” is designed to satisfy people in the service industry, to make everyone else remember to be polite to the staff wherever they go and — somewhat ironically — to be a little harsher to films when they stink. Fortunately there’s no need to be harsh to “The Menu.” It’s a diabolically odd horror comedy that keeps the giggles at a steady simmer until, eventually, they’re just right.

“The Menu” opens in US theaters Nov. 18 via Searchlight Pictures.