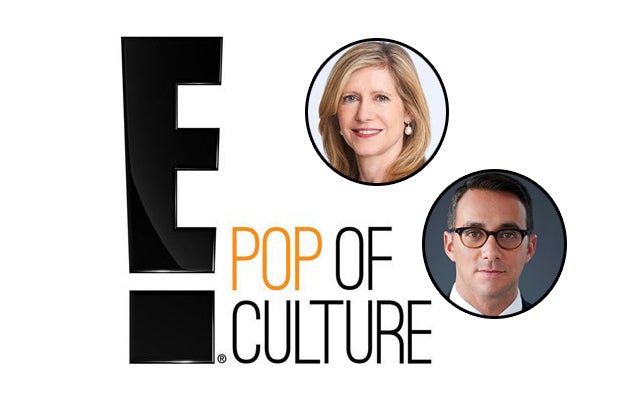 Industry insiders had been speculating for months that Suzanne Kolb would be out as E! president. On Monday, that buzz came to fruition and NBCUniversal swooped in with its succession plan.

What can Berwick and Stotsky expect when taking over E!?

Good brand awareness: The good news is that it has one of the most recognizable brands in lifestyle television. E! News has made itself a top source for entertainment news and a must-watch for major awards red carpet coverage.

Rising digital traffic: In March of this year, E! was pacing toward its fifth consecutive year of audience growth across desktop and mobile platforms. And its website, E! Online, was tracking to deliver its biggest year to date.

Viewership down: The network’s No. 1 series, “Keeping Up With the Kardashians,” is losing viewers. In 2012, Season 7’s finale was watched by 3.6 million total viewers. Season 9, which included the build up to Kim Kardashian and Kanye West’s wedding, was viewed by 2.8 million viewers. That’s a 22 percent drop in viewers over the last two seasons.

“KUWTK” wouldn’t be the only show that debuted before Kolb, then tanked after she assumed leadership of the company. “Kendra,” “Ice Loves Coco,” and “Chelsea Lately” suffered in the ratings.

Late night: After a messy split with Chelsea Handler, E! wasn’t ready to replace the host once she threw her star-studded goodbye in late-August. It also canceled its weekly talk show, “Hello Ross,” after just two seasons, lackluster ratings and politics with Handler’s production company, which produced the talk show. Having announced late night shows in development, it expanded its “Live From E!” panel show to include Ross, newly hired Maria Menounos and Jason Kennedy. Can Berwick and Stotsky revive E!’s late night life?

One and done: When Kolb leaves E!, she leaves a long trail of failed shows behind her. Under Kolb, celebrity plays such as “Mrs. Eastwood & Co.,” which featured Clint Eastwood‘s wife and family, to “The Wanted Life,” which starred the boy band, and “Chasing the Saturdays,” which followed a British girl band, among other shows, didn’t resonate with viewers.

Talent drought: With Handler out the door, Ryan Seacrest pulling out of red carpet coverage and the untimely death of Joan Rivers, E! is facing a lack of star power. Aside from the hiring of Maria Menounos there’s still no Ryan Seacrest replacement.

Who rules pop culture? Kolb’s mini rebrand of E! with the “Pop of Culture” tagline got mixed results from confused viewers and media. Plus, an individual with knowledge of the situation told TheWrap that Kolb and Berwick fought over which channel, E! or Bravo, was actually NBCU’s pop culture network. Well, look who’s in charge of E! now. We smell another rebranding coming to E! — one that will emphasize its celebrity and entertainment roots and honor Bravo’s finger on the pulse of pop culture at NBCU.

Marketing changes? Expect Stotsky, a longtime marketing pro, to make some changes in E!’s approach to marketing and/or its team, led by Jen Neal. The insider said that Stotsky disliked the group, which worked on G4’s campaigns when he was president of the now defunct network.

Who’s old news? Head of E! News, Cyndi McClellan, has already lost the opportunity to run E! to Kolb. As of Berwick’s appointment, McClellan once again got passed over for the big job. Will she stick around after the latest snub?

An NBCU spokesman told TheWrap that there are no layoffs planned with the changes in E! leadership, which can sometimes lead to consolidation of jobs or the elimination of overlapping positions — such as when Berwick was made president of Oxygen last year.