This story about “The Story of Film: A New Generation” first appeared in TheWrap’s special digital Cannes magazine.

It’s hard to envision a more appropriate movie for the opening night of the 2021 Cannes Film Festival than Mark Cousins’ “The Story of Film: A New Generation.” The two-hour-and-40-minute documentary is a vast but idiosyncratic examination of the cinema of the 21st century, beginning with the unusual juxtaposition of Joaquin Phoenix’s stairway dance in “Joker” with the song “Let It Go” from “Frozen.” From there, the survey jumps across genres and countries, with Cousins discussing around 90 different films as he examines the way cinema has extended its language and gone in new directions over the last two decades.

But in addition to being a wry treatise on the movies of this century, the film is also a celebration of the moviegoing experience made during a time of isolation — and its premiere on the first night of the first Cannes Film Festival in 14 months is an ideal way to usher in a return to Cannes’ temple of cinema. Cousins will also have a second documentary, “The Storms of Jeremy Thomas,” about the celebrated British producer, in the Cannes Classics section.

The Northern Irish author and director, whose other films include the original 15-hour “The Story of Film: An Odyssey” in 2011, “A Story of Children and Film” in 2013, and the 40-chapter, 14-hour “Women Make Film” in 2018, spoke to TheWrap from his office in Edinburgh.

“The Story of Film” feels very much like a movie that was timed to be coming out as people are going back into theaters, but it also must have been a painstaking production.
Yeah. It was made on lockdown. We went into ourselves a little bit, I think, during lockdown, and people watched more movies on streaming. And I think that when we went into ourselves, we realized that there’s a lot of cinema in our heads. It’s sort of the collective unconscious, in some way. And so I tried to capture some of that feeling. In my lifetime, this was the first purely global phenomenon, where everybody was challenged and saddened by COVID. So I was trying to capture a sense of, “We’re all in this together.”

What was your process like? Obviously, there are almost a limitless number of films that you could include.
Because the theme in “The Story of Film” is innovation, it’s not the best films, it’s the most innovative films. So that helps a lot. I’m thinking, “What actually did something new?” And then I always ask myself, “What do I not know?” I had to inform myself about the films that I hadn’t seen. And beyond that, there are only 90 films in this film. It sounds like a lot, but actually it’s not. You really have to think, “What do I not want to leave out?” I love Indian cinema, and I don’t want to leave out Indian cinema. I think a lot of Western cinephiles don’t see a lot of Indian cinema, and I don’t want to make that mistake.

I always work with pieces of paper where I write the running order. I knew I wanted to do comedy, so I wrote down “Booksmart,” “Deadpool,” “Crazy World,” “P’tit Quinqin” … There’s action, dance, bodies, slow movies, surrealism, and then new language and changing technology. So I scribbled on a piece of paper really quite quickly — one hour or so to get the blueprint. Once I know I’ve got the blueprint, then I can go into detail.

In the past, you’ve done multipart 14- and 15-hour movies about film. Did you know going in that this one would be more contained?
You don’t know exactly what will happen, but once I do that big piece of paper, then there’s a slight sense. This one felt about two hours and 40 minutes, which is what it turned out to be.

I’m sure that there were instances where there were things you just couldn’t find the time to include.
There was a lot of Russian cinema that I would like to have kept in. I wanted to put a lot more horror cinema. I wanted to put in [Daniel Radcliffe’s] “Swiss Army Man.” In documentary, there’s loads of stuff that I wanted to include. Obviously, I’m in the entertainment business in some ways, so I need to feel as if I can tell a story which will engage people.

Do you always look for unusual juxtapositions? The comparison of “Joker” and “Frozen” at the beginning of the movie is a way of saying, “I’m going to draw connections you aren’t thinking about.”
Absolutely. That’s my job. I was very pleased to edit together “Joker” and “Frozen.” I think there is something in that connection, and just from the creative point of view, it’s really enjoyable to make those connections. You want to say to people, “OK, you probably didn’t think that Joker and Frozen had anything to do with each other, but maybe there is something here.”

This is a moment in time when we’re questioning the whole idea of what film is. Your movie includes the Netflix series “Black Mirror” and Beyoncé’s visual album “Lemonade” and Steve McQueen’s “Small Axe,” which is competing for awards as a TV miniseries rather than a film.
I’ve got to take an inclusive approach. I think if you go back a few generations and think of Ken Loach’s films, some of them were made for TV here in the U.K. We have many examples from many different countries where films were made for another medium. I think of Stephen Frears’ great film “My Beautiful Laundrette,” which was made for TV. We’ve got loads of examples. I have to be agnostic and format-blind. If my job is to look at the creativity and the inventiveness, the language of cinema, then I will look for it everywhere and anywhere. It doesn’t matter, you know?

There’s so much talk about the film industry, and of course, the film industry is a very interesting property. But I’m trying to ignore the film industry and just ask, “Where is the fertile soil in which film grows?” I was lucky enough to know Lauren Bacall, and she said, “The industry’s s—, it’s the medium that’s great.” And there’s something in that. It’s a useful way of thinking about things.

Maybe this is more of an industry-focused question — but with the theater closings we’ve seen over the past year, and the threats to theatrical distribution as everything moves to streaming, are you worried about the future of film?
I think that film is not vulnerable. When cinema came along in 1895 or whenever it was, it entered our collective unconscious and it stayed there. And it’s still there. It’s in get it out. Obviously, there’s lots of stuff about how people are seeing films in their home instead of on big screens, and I value that debate. But film filled a gap in our desires, our needs as human beings for a kind of sublime. I use the phrase the affordable sublime — where I live in Edinburgh, I can go to see a movie for five pounds, and I can encounter something absolutely sublime. That’s still valuable. So I’m quite optimistic about that.

A number of other people have used a metaphor, which is quite interesting, comparing film to the Islamic world. In Islam, you have your daily private worship, but then you have your Friday mosque, which is your big public experience where we get together collectively to worship. We will be watching films in our own private realms, but also we’re going to be watching them in public. And I think that human beings have not changed all that much. We still need story. We still need unraveling of self. We still need to get lost in something bigger than ourselves. We still want to feel transformed, to feel that this day is different from yesterday. And I think that cinema can still be that.

What can you tell me about the Jeremy Thomas film?
As you know, Jeremy Thomas is one of the great film producers — a kind of Irving Thalberg-type figure, I would say. He and I drove to Cannes a few years ago and I took two cameras. It was like “Thelma & Louise”: We just stayed in the car and talked about cinema. And, of course, he’s made some of the greatest films of our time, from “Merry Christmas, Mr. Lawrence” to “The Last Emperor” to all the Nic Roeg films. So for me, it was like he was a samurai and I was the apprentice. It’s almost like a passing on the baton of passion for cinema.

And at a moment when corporations are buying up other corporations’ intellectual property, when Disney owns a lot of stuff, it’s a good time to celebrate these seminal figures, these countercultural figures, and to be reminded that cinema can deliver other things besides pure entertainment and escapism. 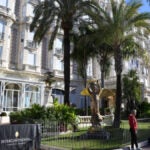 Often, when I talk to directors about film festivals, they’ll say, “I wish I had time to see more movies, but I was working with my movie and I couldn’t get away.” I have a hard time picturing you in Cannes not going to see as much as you can.
That’s true. I think this will be my 24th year at Cannes. I love seeing films there, but I have to say that when you’ve got a film there, there’s a lot of anxiety. And therefore it’s not the easiest way to see a film.

My ideal way to see a film is on a Tuesday afternoon in my local cinema where I’m totally not working and I have nothing to think about except for losing myself in the film. So maybe I won’t see many films in Cannes this year — but I know when I saw the list of films, I was salivating.