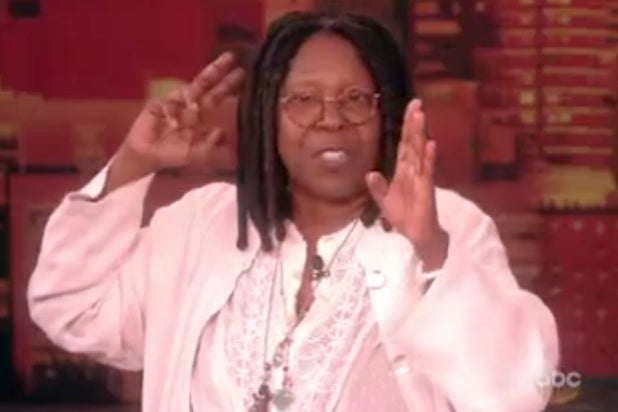 Even though Stephen A. Smith apologized for saying that women sometimes provoke getting hit, Whoopi Goldberg is still coming to his defense.

On Monday’s “The View,” Goldberg was vehemently defending the context in which Smith made his original remarks, referencing how the wife of Baltimore Ravens running back Ray Rice mentioned that she hit him first. According to Goldberg, women should be taught from a young age the lesson “Don’t be surprised if you hit a man, he hits you back.”

See video: Whoopi Goldberg on ‘View’ Panel Shakeup: ‘There Could Be Six Turtles at the Table’ (Video)

She went on to say, “If you make the choice as a woman who is 4’3” and you decide to hit a guy who is 6 foot tall and you’re the last thing you want he wants to deal with that day and he hits you back, you cannot be surprised.” Of course, the rest of the panel was saying that a man should never hit a woman, and in principle Whoopi agreed, but she was advocating that women should learn to keep it under control themselves.

See video: Joe Morton Tells ‘The View’ That Rowan Pope on ‘Scandal’ Is Based on His Father (Video)

“I know I’m going to catch a lot of hell, and I don’t care. But you have to teach women, do not live with this idea that men have this chivalry thing still with them, don’t assume that that is still in place.”

See video: Jenny McCarthy Implies Hillary Clinton Is a Lesbian During ‘The View’