Julie Bowen really doesn’t want you to see her do a table-read.

Which is going to be a problem.

The “Modern Family” star is good enough on camera to have won two Emmy awards, but without the opportunity to use her physical skills, she says she falls apart.

Unfortunately for Bowen, she’ll be subject to that searing agony next month, which she learned onstage at the Beverly Hills Montage. TheWrap’s executive editor Joseph Kapsch informed Bowen that a live table-read with the cast is part of a fan appreciation day that USA Network has planned for Oct. 28.

“Well! This is the first I just heard!” she said, looking perfectly mortified. “That’s great! Fun! It’s my job, and I’m so lucky to have this job, but there’s a part of my job that I’m not very good at. Its nerve-wracking, and I tried to kind of put the kibosh on loads of extras.”

She continued, “I would love to say, ‘We can’t do those.’ But I’m one of 10, and everyone else is easy-breezy and does them with their eyes closed.”

Also read: TheGrill: Bill Maher on Why He’ll Never Win an Emmy – Not ‘If You’re Gonna Be the Brave One’ (Video) 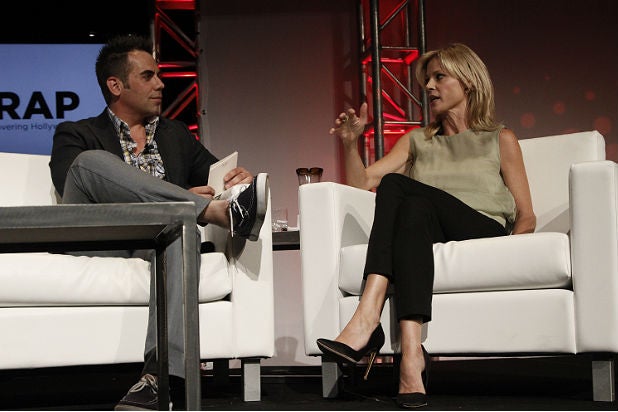 Though she’s clearly found her stride in comedy, Bowen said she started out as a dramatic actor – make that a melodramatic actor.

“I spent years crying! On camera. I was able to make a nice living and carve out a nice career for myself doing that. But always as somebody’s wife or girlfriend,” she pointed out. “I was a weeper.”

Another special skill that’s helped her in Hollywood: She’s immune to rejection. Though her older sister Molly was the one with acting ambitions and chops, “she couldn’t deal with the industry,” Bowen told the crowd.

“She’s very talented as an actor,” Bowen said. “But she couldn’t hear ‘No.’ And that doesn’t bother me at all.”

She said she’d like to do more movies, but has to balance parenthood with Hollywood realities.

“With a film, you’re gonna have your one female lead,” she pointed, and for the most part, “that’s got to be” someone who drives foreign pre-sales. And she’s not one of those actresses, Bowen said. “That’s going to be a Cameron Diaz or a Jennifer Aniston.”

Nor does she plan to take it all off onscreen.

“Naked isn’t going to happen,” she said. “Because it’s not cute. I’ve got three kids. I wear Spanx in the shower.”

Asked whether she’s getting on the brand-yourself bandwagon, Bowen – who’s active on Twitter – said she thinks about it “because I’m being told that I need to be thinking about it.”

She said that she’d “like to disappear as a brand,” making money as a brand without necessarily having to sell it too hard.

She began her answer by chiding members of the audience worried about spoilers and lamented binge-viewing model in general.

“I got news for you guys. It’s TUESDAY. All we want in this industry is to create appointment television. If you’re not caught up by now – too bad,” she said, before moving on to Sunday night’s finale on AMC.

“They’re all dying,” she said of the show’s characters. “Killing them like flies.”