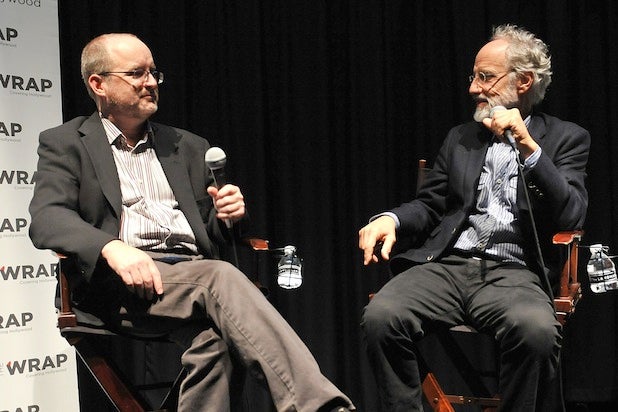 Documentaries sometimes impact public policy, and “More Than Honey,” a look at the world’s disappearing honey bees, has already had one — possibly even influencing the European Union’s decision six months ago to ban certain pesticides.

But the fate of the insect and agricultural worlds could wait. At a showing of “More Than Honey” Wednesday night at the Landmark — part of TheWrap’s awards screening series — Oscars columnist Steve Pond started off a Q&A with director Markus Imhoof by asking the question most on viewers’ minds: “How many times did you get stung making this movie?”

“We had a contest on the team, but in the end I won,” said Imhoof, looking no worse for the wear a couple of years after the globe-hopping shoot. “The cameraman (fared) the poorest, though,” he added, explaining that putting the camera to his eye brought his veil into close contact with his face and had the bees “stinging his nose, so he looked like the elephant man.”

Any temporary deformities were worth it for a stunningly cinematic documentary that includes luscious landscapes from around the world, as well as the most lovingly photographed close-ups of insects since Saul Bass fetishized ants in the 1970s with “Phase IV.” The Swiss director’s doc has seven fascinating real-life beekeeper characters, but it’s no mistake, he said, “that more and more the bees become the protagonists of the film, and (by the end) they are bigger than the men.”

Which leads to another question: The close-ups of bees in flight – and mating in mid-flight – had to be digital creations, no?

“They are all live bees,” said Imfhoof. “The producer, when he saw the budget, said ‘For this money I’ll make you a CG bee, and she will not sting. We’ll pay.’ But we could never have imagined how they move, and how they turn while they are flying … We filmed with very sophisticated cameras, and all the flying bees are filmed at 300 frames a second. If you shoot with that camera speed, and get one second of flight, that gets you 12 seconds of film. But you have to catch the right second — otherwise you don’t see anything.”

As a result of the bees’ high speed, the movie’s big sex scene is not exactly going to rival “Blue is the Warmest Color” for length. Where filming took place, the bees mate at 30 meters, but the camera towers only got up to 10 meters. Solution: put some queen pollen on weather balloons, then lower them to the height of the towers to try to draw the canoodlers down to camera level.

Overseeing nature photography is hardly Imhoof’s usual gig. All of his previous features have been dramas — including his 1981 breakout “The Boat is Full,” which was nominated for an Oscar for best foreign language film. Besides being a documentary contender, “More Than Honey” is Switzerland’s entry into the foreign-language Oscars race this year, too (even though the dialogue in the American scenes is English).

In the middle of the film, there’s a scene in China that shows the most dystopian possible outcome of decimated bee populations: In an area where pesticides have wiped out the insects, field workers are pollinating flowers by hand, one at a time.

His crew didn’t have permission to film this ultimate outgrowth of Mao’s not very environmentalist policies, and when the chief pollinator grew suspicious of their intentions after the first day of a planned three-day shoot, “we had to escape, because it was so dangerous for our Chinese crew members. But this lady is really proud and thinks that she can do better than the bees.”

That could easily have provided a downbeat denouement for the film, but Imhoof felt “it shouldn’t be a catastrophe film. I wanted hope at the end of the film, but it’s a kind of strange hope — that the killer bees will save us.”

Therein lies the twist. “My friends laughed when I said I was going to make a film about bees: ‘Oh, now he’s old, he makes films about insects.’ They said, ‘Hopefully there will be some killers bees that there is some tension in the film.'”

But in fact, the “killer” (i.e., “Africanized”) bees are the heroes, of a sort. In Imhoof’s view, bees need to maintain a natural aggression that helps in warding off parasites and disease and resist chemicals — a vigor that has been bred out of them by 20th century beekeepers. The “killers” still have that fight in them, but are also mellowing out to the point that they represent less of a threat to human onlookers than was evident in their first bouts of bad press.

Even these new super-bees still need human assistance … and “More Than Honey” has stepped into the breech.

“The European parliament discussed banning the most dangerous pesticides, but they didn’t accept it on the first round,” said Imhoof. “When the film opened in Belgium, they were discussing it again, so we had a screening in the European parliament, and two weeks later they banned the pesticides (in April 2013).

“I don’t know that it’s only my film (that accomplished that), but it makes you happy.”