The slick and star-driven Hollywood rom-coms of the pre-Judd Apatow era are having a mini-revival this year. First there was “Marry Me,” which teamed Jennifer Lopez and Owen Wilson, and now comes “Ticket to Paradise,” a sun-kissed comedy of remarriage with George Clooney and Julia Roberts. (Or should that be the other way round? Clooney’s name is on the left of the posters, but Roberts’ is slightly higher up.)

It’s efficient enough, and there are certainly tougher things to watch than two supremely attractive movie icons trading sarcastic insults in a leafy tropical Eden. But the film’s director and co-writer, Ol Parker, is so committed to light, feel-good escapism that he leaves out all of the requisite tension and twists — and, for that matter, the requisite jokes.

Parker’s last film was “Mamma Mia! Here We Go Again,” the cheerfully redundant sequel-prequel to “Mamma Mia!” That was a brutal social-realist tract compared to “Ticket to Paradise.” 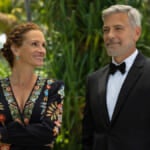 What could have caused this loathing, you ask? What manner of unforgivable betrayal or catastrophic misunderstanding could have kept the fires of hatred burning for decades? The disappointing answer, as David explains, is that he and Georgia broke up because they were both working too hard, and so he came to feel as if he was running a daycare center with someone he used to go out with. This phrase is almost as striking as it was when Ethan Hawke coined it in “Before Sunset” in 2004, but it doesn’t give the characters any real reason to hate each other, so their eventual reconciliation has a shrugging, why-the-hell-not inevitability.

There are no practical obstacles in the way of their reunion, either. David is conveniently single, while Georgia’s bumbling, much-younger boyfriend (the charmingly goofy Lucas Bravo, “Emily in Paris”) is so unsuitable that their break-up seems to come as a relief to both of them. Parker won’t allow anything as painful as an actual broken heart to dampen his film’s carefree, tourism-advert spirit. 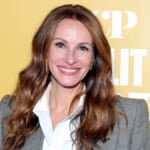 The opportunity for the divorcees to patch things up comes when their daughter Lily (Kaitlyn Dever) graduates from law school and goes on holiday to Bali with her BFF Wren (Billie Lourd, who has so little to do that it might have been kinder to have edited her out of the film altogether). After a perfunctory meet-cute and two even-more-perfunctory conversations, Lily gets engaged to resident hunk Gede (Maxime Bouttier), and they schedule the wedding for a month later, because, well, there wouldn’t be a story otherwise.

David and Georgia immediately fly to Bali, ostensibly to attend the wedding, but really in the hope that they can trick Lily into dumping her intended. The snag is that it’s impossible to care whether their sabotage plans work or not. No one will be desperate for Lily and Gede to stay together, because this bland young Barbie and Ken appear to have nothing in common except their lack of personality.

On the other hand, no one will root for Lily to return to the big city and embark on a legal career, either. Why should they, when Bali (or Queensland, Australia, where the film was shot) is an unspoiled utopia, the creepily exoticized locals are relentlessly happy, and her fiancé makes a comfortable living as a seaweed farmer — or, as he puts it, “a partnership with the goddess of the sea”? If anyone’s parents should be objecting to the rushed nuptials, it’s Gede’s. But no, they’re delighted to welcome this tourist into their idyllic family business. 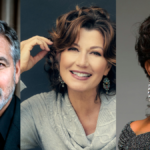 As for David and Georgia, their efforts to break up the lovebirds are boringly halfhearted. What the scenario calls for is a cunning, over-complicated scheme that somehow emphasises the exes’ compatibility. What we get instead are two feeble stratagems reliant on the superstitious nature of the Balinese (again: creepy). The film is then padded out with one sequence, entirely irrelevant to the plot, in which David is bitten by a dolphin, and another sequence in which he and Georgia get drunk and dance in a beach bar. This, it seems, is all it takes for them to realize that they get on quite well, so it’s a shame they didn’t get around to it years earlier.

In the meantime, their bickering has its amusing moments. Robert is nicely flinty, and Clooney adopts the self-parodying insensitive-boor persona that he sometimes puts on at awards ceremonies. (Best example: grouching about Ang Lee at the 2006 Oscars.) But they don’t have the passion of two people who are ready either to kill or kiss one another. Indeed, “Ticket to Paradise” is as sexless as a Marvel blockbuster.

Roberts is stuck in a selection of unflatteringly baggy romper suits possibly inspired by the Teletubbies, and Lily and Gede seem so chaste that when Wren gives them a stack of condoms as a wedding present, she probably should have thrown in an instruction manual, too.

That’s one of the key differences between “Ticket to Paradise” and the romantic comedies to which it harkens back. In the best of those, you could believe that the characters actually fancied each other. But Parker has taken the “Paradise” part of the title seriously. Everyone in his film is a little too angelic.

“Ticket to Paradise” opens in US theaters Oct. 21 via Universal Pictures.