The Weinstein Company has reportedly committed more than $25 million in acquisition and guaranteed marketing costs for John Carney‘s “Can a Song Save Your Life?” – and whatever kind of return they get at the box office, that money has bought them a warm, generous, crowd-pleasing movie — and an almost guaranteed Oscar nominee.

The film, which stars Keira Knightley as a British songwriter in New York City, Mark Ruffalo as a down-on-his-luck record executive and Adam Levine as the boyfriend who ditches Knightley’s character when he becomes a rock star, won richly deserved standing ovations at both of its Toronto Film Festival screenings this weekend.

Funny and open-hearted in a way that will be familiar to fans of the director’s “Once,” the film is the best use of movie music since that 2007 indie gem — and like that film, which won an Oscar for songwriters and performers Glen Hansard and Marketa Irglova, its songs are so moving and so essential to the story that it’s nearly impossible to imagine the Academy’s music branch not at least giving one of the songs a nomination.

Carney admitted as much when he introduced three of the film’s songwriters from the stage of the Ryerson Theater on Sunday afternoon. “Those are the three assholes who are going to win the Oscar for Best Song this year,” the Irish director said with a grin.

Coming into Toronto, it was far from certain that magic could strike twice for the director of “Once.” That film was the rarest of indie hits, a micro-budgeted charmer that achieved the kind of success — including a Broadway adaption that won multiple Tonys — that could seemingly only happen, well, once.

But then Carney came to town with another movie about love and music, and another one that deals with some of the same themes as “Once” — loneliness, isolation, the little connections that can be achieved through song.

It does so not with two unknown leads, the way “Once” did with Hansard and Irglova, but with Knightley, Ruffalo, Levine, Catherine Keener and a cast that also includes Cee Lo Green and Hailee Steinfeld.

With another movie dealing with similar themes and focused on the power of music, could the delicate balance of “Once” be sustained once you bring in stars like Knightley? In fact, it could: “Can a Song Save Your Life?” is bigger and a little slicker, but its heart is in the same place, and Carney has once again shown that he is brilliant at capturing the delicacy and power of a musical moment. 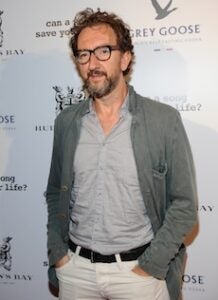 And while Knightley may be a movie star, when she sings in the movie’s opening scene in a waifish, fragile voice, she is utterly convincing as a songwriter and reluctant performer who needs to be persuaded of her own talent.

That song is heard once in the tentative acoustic performance that Knightley gives it, with chatter from a barroom full of disinterested observers. Then it’s reprised a while later from the point of view of Ruffalo’s character, who hears it in his head in a fuller arrangement and a more confident performance; the reprise, which shows the song gaining in power and passion, is as wonderful a moment as the scene in “Once” in which Hansard and Irglova collaborated on “Falling Slowly.”

Ruffalo’s role is so delicious, and he gives his character such disheveled panache, that the movie sags when it shifts to the Adam Levine storyline for a while in the first act. But for the most part Carney (right) strikes a delightful balance between humor and pain, between hurt and healing, between not taking anything too seriously and knowing the truth of a line like, “You can tell a lot about a person by what’s on their playlist.”

Sure, it’s easy to be cynical about “Can a Song Save Your Life?,” starting with its title. You can say that “Gravity” and “12 Years a Slave” and “Dallas Buyers Club” and others may be the big, prestige movies debuting at Toronto, and they may well be the films that will figure most prominently in the awards race.

But there are times when the thing you want most is not a big, important movie but a simple, beautiful story told with sensitivity, warmth, humor and a big heart. Times when you don’t need a movie to save your life, you just need a movie to make you feel good.

For those times, John Carney is playing our tune.