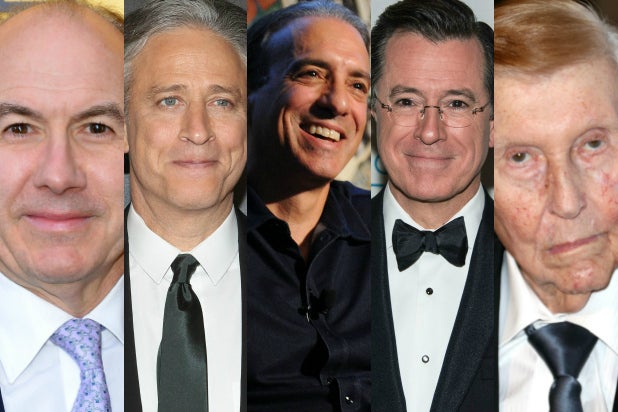 It’s been a tough 2015 thus far for media giant Viacom, home to television channels MTV, Comedy Central and Nickelodeon, as well as Paramount Pictures. In just about six weeks the company has settled a class-action intern lawsuit, been fined for misuse of Emergency Alert Warnings, lost longtime MTV executive Van Toffler and TV Land President Larry Jones and finds itself having to replace Jon Stewart on the heels of losing Stephen Colbert.

Plus: its stock price is shrinking.

Viacom stock, both A and B class, is down 21 percent from a year ago. By contrast, Disney is up 31.15 percent, Time Warner is up 34.16 percent and 21st Century Fox is up 6.09 percent. That said, Viacom is not alone on the decline: Discovery, which reports its earnings Thursday morning, is down 26.64 percent over the past 12 months.

Herzog’s Group will consist of MTV, MTV2, LOGO, VH1, Comedy Central and Spike, as well as the related digital networks and MTV’s “Always On.” Zarghami’s will comprise all the brands currently in the Nickelodeon Group, including Nickelodeon, Nick Jr., TeenNick, Nick at Nite, NickMom and NickToons, as well as TV Land, CMT and CMT Pure Country.

“The new groups are an enormous opportunity for us to take advantage of our strong creative teams, to share our expertise, and to promote greater cross marketing and, in some cases, cross channel programming activity,” Dauman wrote in an email obtained b yTheWrap.

BTIG analyst Rich Greenfield downgraded Viacom stock (as well as Discovery’s) from a “Buy” to “Neutral” mid-summer. His decision, he told TheWrap this week, was based on a belief that advertising would decline because many Viacom shows don’t have live-viewing urgency, and that some of the company’s smaller channels might not get distributed in bundles.

“I don’t think any one show is the be-all, end-all for Viacom,” Greenfield told TheWrap, referring to Jon Stewart and Stephen Colbert exits. “I think the reality over time [to grow] will be their ability to come up with great programming that drives advertiser interest and content so great that they can’t be dropped.” But, he added, “None of these things help.”

While hitting the mark on forecasted Q4 earnings per share, on the subsequent earnings call, President & CEO Philippe Dauman (who hauled in $44.3 million in 2014 and recently re-upped his contract through 2018) hinted at coming layoffs, which TheWrap confirmed. The cost-cutting measure is expected to come this quarter, along with possible programming write-downs.  A quarter earlier, Viacom saw its profits slip due to fewer film releases.

The company is on the cusp of a great deal of change.

TV Land President Larry Jones made his exit after 27 years on Wednesday, right on the heels of the well-respected Toffler resigning on Tuesday after 28 years. These are just the latest high-profile losses at the company. When the longtime “Daily Show” host announced that he would depart his Comedy Central show later in 2015, Viacom’s value slid by nearly 1.5 percent the following day, accounting for a $350 million loss of valuation. That decline has now course-corrected to the prior trading price.

On April 9, 2014, the day before Colbert was named David Letterman‘s “Late Show” replacement, Viacom’s Class A stock (VIA, pictured above) closed at $86.04. The next day it closed at $83.14. On Wednesday, VIA closed at $68.31. The stock chart above shows a year of significant decline.

Meanwhile, Viacom Executive Chairman Sumner Redstone is 91 and did not participate in the most-recent investor call. With a succession plan that has not been clearly defined, some analysts and investors may not be feeling confident about company leadership -and perhaps neither are the company’s own executives.

Viacom stocks had been generally rising before the stock market crash in late 2008.

When MTV, CMT and VH1 architect Toffler announced he was exiting the company on Tuesday, the market did not immediately react harshly to his exit, but some in the business saw it as a blow to MTV as a brand. “The loss of Van Toffler at MTV seems to signal music videos are NEVER coming back,” TV agent Micah Johnson wrote to TheWrap via email.

Toffler penned an impassioned goodbye in a witty and touching memo to staff. The executive, who joined MTV in 1987, is leaving to launch his own content company, tentatively titled Below the Radar.

“[T]his is a very personal decision about pursuing the loud and insatiable part of my failed musician/poet soul that needs to purely make great stuff … after a long wonderful run with all of you,” he said.

Despite all the changes, Al Tompkins, the The Poynter Institute’s senior faculty for Broadcasting and Online, believes Comedy Central at least will be just fine — though perhaps down the road.

“Nobody could replace Jack Paar, but Johnny Carson built his own legacy on ‘The Tonight Show,” he offered, speaking on Stewart’s retirement. “We tend to think nobody will ever top whatever is hot today and something else comes along that does just that. When ‘Dallas’ ended its run, the popular notion is nothing will ever get a bigger audience. ‘MASH’s’ final episode did.”

“It does not always happen right away, but don’t be fooled into thinking there ‘Will never be another’ — there always is,” he concluded.

Jordan Chariton contributed to this report.