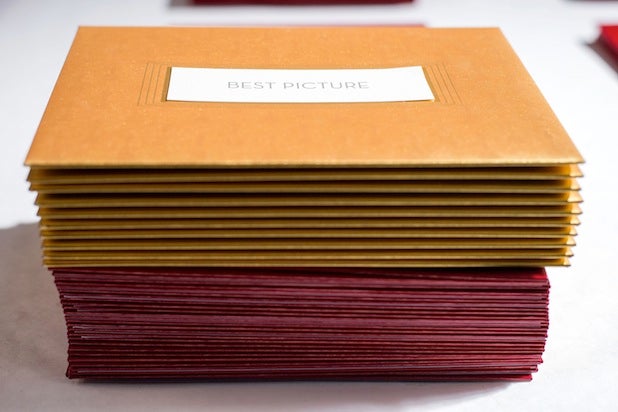 Voting for the Academy Awards ends on Tuesday afternoon at 5 p.m. PT – which means that at the Oscars, as well as in politics, election day falls on Tuesday.

But why can’t what happens next be more like politics?

Sure, we’ve seen lengthy, expensive campaigns run by sought-after professionals, favorites who’ve flamed out in the primaries (i.e., the guild awards), frontrunners who’ve missed no opportunity to charm the electorate and even politicians mouthing off about “American Sniper” and “Selma.” In that way, the Oscars are a lot like a political race already.

But now, as the polls close and the votes are counted, we get a curtain of silence, and a lot of unanswered questions, several of which I’d like to ask here.

Mind you, I don’t really want the Oscars to be more like politics — they’re too political already. But it’d be fun to know some of these answers, most of which are only known to a couple of people who work for PricewaterhouseCoopers.

Here’s what I want to know, and what I and almost everyone else will never know. If this were a political election, we’d find out most of these answers from the talking heads and pollsters on CNN — but it’s the Oscars, where ignorance is a peculiar kind of bliss.

How close was the Best Picture race?
Is this year’s race really a nail-biter, or do all of us pundits have it wrong? Wouldn’t it be great to know the margin of victory? Sure it would … unless you’re the last-place finisher, or the movie that got skunked even though everybody thought you were going to be a real contender.

Who finished second?
We always think we know the answer to this question, but do we?

How many people voted?
Former PwC balloting leader Rick Rosas once told me that the level of participation among Oscar voters would be the envy of any political election, and ex-AMPAS president Hawk Koch said a couple of years ago that about 90 percent of eligible voters cast ballots. But out of the 6,124 voting members of the Academy, it’d be fascinating to find out exactly how many participate.

Did they vote electronically, or on paper ballots?
Koch offered some rough figures about this, but his percentages didn’t exactly add up: If the numbers he gave were accurate, they meant that twice as many voters used paper ballots instead of voting online two years ago. And when TheWrap did the math and printed that conclusion, the Academy insisted that we were wrong.

So what are the correct figures? It’s logical to assume that more and more voters are opting to cast their ballots online, and it’d be interesting to see just how thoroughly the membership is embracing that technology.

Did people rank all the best picture nominees?
Unlike all the other categories, where you simply vote for a single nominee, the Best Picture ballot asks you to rank all the nominees in order of preference. But anecdotal evidence suggests that lots of voters figure they’re better off simply picking their favorite and leaving the rest of the contenders unranked.

That’s not a good strategy — because unless you vote for one of the two top films, you’re simply guaranteeing that your ballot is discarded and you have no say in picking the winner. But if enough voters insist on playing the game this way, it could change the way Oscar campaigning is done.

When do voters cast their ballots?
Oscar strategists schedule screenings and send out press releases right up to the ballot deadline, trying desperately to change the mind of the last few undecided voters. But how many of those voters are there, really? PwC once told me that a lot of voters cast their ballots immediately, a steady stream come in throughout the voting period and then a flurry are submitted at the last minute — but that was before the introduction of online voting, which makes it easier to get away with procrastination.

Did most members vote in every category?
The Academy tells its members that they should see every nominee before voting in a category, and that it’s OK to abstain from voting in categories where they haven’t seen all the nominees. Are the voters listening, or is a category on an Oscar ballot just too irresistible to leave blank?

Rosas once told me that the vast majority of voters cast ballots in every category — but when I mentioned that to then-Academy executive director Bruce Davis, he seemed surprised. (He also seemed annoyed that Rosas had told me that.) Since that conversation, the Academy has abolished the rules that restricted certain categories to members who’d seen all the nominees in a theater, making it theoretically possible for every voter to make a choice in every category.

Which categories had the lowest participation?
The danger here is that the Academy has already heard cries to speed up the telecast by dropping, say, the shorts categories. If it turns out that only a few hundred members are picking the winners, those cries would no doubt intensify. So maybe it’d be best to keep this one quiet.

But I still want to know.

And a related question: How many people voted in a category where they didn’t see all the nominees?

Of course, the only way to know this answer would be to poll every single Oscar voter, because even PwC has no idea which voters have seen which movies. But it’d be nice to know that most of the votes were informed ones.

Then again, that might be like asking how many presidential voters have really studied the issues. Sometimes, I suppose, political elections and Oscar elections are a lot alike.