Adam McKay’s “Talladega Nights: The Ballad of Ricky Bobby” once attributed a quote to Eleanor Roosevelt about America being a nation of “hot, nasty badass speed” (incorrectly, natch) in his now-classic racing opus, but it could just as easily apply to “Winning Time: The Rise of the Lakers Dynasty”, the hit HBO series about the tumultuous, fiercely political road throughout the 1970s and 1980s to creating a benchmark legacy for the famous NBA team, not to mention world-famous players like Magic Johnson and Kareem Abdul-Jabbar. And cinematographer Todd Banhazl could easily tell you a thing or two about “hot” and “speed.”

“I think pulling focus on [shooting basketball] is harder for sure,” says Banhazl, “it just brings different challenges. One of them involved a rolling camera operator, who was our main means of keeping up with the plays. We couldn’t give him, like, a small, little digital camera. So, what we did is we gave him an ARRI 16mm camera, and built it just as small as possible, and gave him a backpack rig of power and wireless video to send out to us.”

Speaking of McKay, Banhazl got the gig out of McKay’s affection for his Independent Spirit-nominated work on the majorly successful drama “Hustlers,” which McKay served as a producer on. “I heard that they were making a pilot about the Lakers in the ‘80s. I was really excited and reached out to their team. So, me and McKay talked about it and decided that we wanted to do the pilot together.” 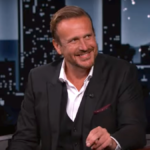 “Winning Time” largely eschews standard digital photography and instead, much like the enterprising Lakers of the title, goes all out in an array of stocks and styles. “We shot 35mm, 16mm, 8mm, Kodak color stocks, black-and-white 16 mm stocks. We also used different photochemical processes to affect the film as well, it really depended on our main looks. If we were doing a flashback of a certain character, or jumping to a different time period, we tried to create or match film stocks and looks to the time period.”

Banhazl shared cinematography duties with Mihai Mălaimare Jr. — who has worked with Paul Thomas Anderson and Francis Ford Coppola among many others — and it proved to be a fruitful collaboration, and they soon realized that to truly achieve the grandeur needed, two heads were better than one. “We both knew that we wanted to mix film formats but didn’t know which were going to be the right ones”, explains Banhazl. “But we were excited by the idea that you could feel the difference in the formats, and that meant like seeing the perforations in the corners or feeling the grain structures. And that was all there from the beginning because it was also on the page, not technically, but the script had this self-referential, ironic, sarcastic quality that we wanted to be felt in the image as well.”

Banhazl’s team also used Kodachrome stock of the 1950s as a prime basis for many of the compositions, due to its historic basis in advertising, and they wanted a similar look for conveying the later period they were working in, something that music videos and the landmark TV spots directed by titans such as Tony and Ridley Scott and Michael Bay helped usher in, a milieu that Banhazl himself hails from.

“In music videos, we got to play in so many different aesthetics and styles,” says Banhazl, who has shot videos in the past for artists such as John Legend, Imagine Dragons, and Lorde. “It really got me excited by the idea that the aesthetic can speak to the themes and the style can have a deeper meaning behind it. And that style can also be part of the conversation for an audience, in addition to the story, the script, the performance…television and music videos really speak to each other in many ways.”

“Winning Time,” inspired by the acclaimed, eye-opening book “Showtime” by sportswriter Jeff Pearlman, is panoramic in scope, focusing on the owners, coaches, families and most notably, the hoopmasters who drove the Lakers to eventual victory. And this team wanted you to see all that nitty-gritty in an incredibly literal way, given the numerous amount of extreme close-ups, direct addresses, and kinetic, uninterrupted energy on the court.

“I feel like we tried to be as aggressive as possible,” adds Banhazl, who ironically enough, did some work on the AppleTV+ documentary “They Call Me Magic” which was also released this year. “And I think part of the close-ups is seeing these characters and these performances in the most vulnerable way. We referenced John Cassavetes and Robert Altman movies of the ‘70s where makeup wasn’t as intense. And we talked a lot about like the shine and glow to be seen naturally, oils in their skin coming out, things like that. And we use a lot of hard light, so hopefully it helps the performances feel even more visceral and vulnerable.”

“Winning Time: The Rise of the Lakers Dynasty” is now streaming on HBO Max.

Also Read:
‘Winning Time: the Rise of the Lakers Dynasty’ Renewed for Season 2 at HBO