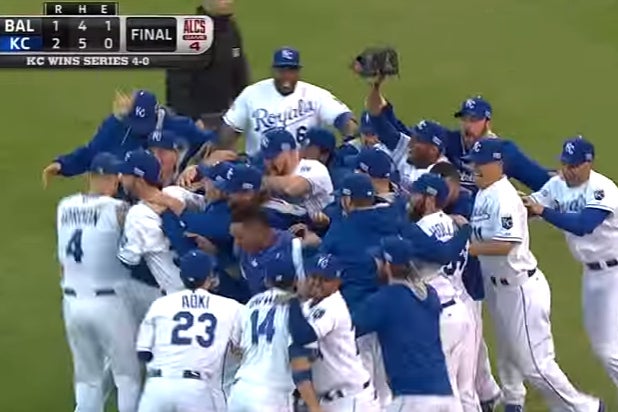 From a hardcore baseball fan’s perspective, having the small-market Kansas City Royals in the World Series for the first time since 1985 is pretty cool. From a TV programming professional’s standpoint, well, it pretty much sucks. Michael Mulvihill is both.

Therefore, the Fox Sports senior vice president of Programming and Research will be a little torn on Tuesday when Major League Baseball’s championship throws out its first pitch.

See photos: 12 of the Most Dramatic Moments in Sport Movies

“I honestly think that Kansas City being in the World Series is maybe the best thing that’s happened to baseball in 10 years,” Mulvihill told TheWrap. That said, ratings-wise he admitted: “I think it’s possible that with the small market we may be down a little bit compared to last year.”

Still, they’ve got the San Francisco Giants, who hail from the sixth largest TV market. And there is something redeeming about having the Royals, which comes from the nation’s No. 31 TV market.

To Mulvihill, it’s the Regional Sports Network (RSN) relationships that drive the current business of baseball, which Fox Sports is very much in. Major League Baseball would agree with that sentiment, he said, though they’d also throw in ticket sales.

“Those are both things that are reliant on every fan base having hope and believing that their team has a chance to compete and has a chance to win a championship,” Mulvihill said.

Also read: Derek Jeter ‘100 Percent Sure’ He Won’t Come Back to Baseball

The Cinderella-story Royals are proof of a professional baseball competitive balance that is good for his company’s long-term business interests, he believes.

But for right now, Mulvihill sees three factors determining the upcoming World Series Nielsen ratings: those aforementioned markets, the length of the series, and the competitiveness of each individual game — and not in that order. The first one determines the potential target audience size, the second offers Fox network more nights of a very high-profile TV product, and the final factor is key in discouraging channel-flipping, which would harm viewer averages over the course of a long broadcast like a baseball game. The middle one matters most, Mulvihill said.

“To me, the most important factor to our bottom line is volume and having the series go as long as possible,” Mulvihill told us. “You’ll always take a seven-game matchup of any two teams over a four-game sweep involving the Yankees or the Red Sox.”

He added, “Obviously, it’s something that’s completely out of everybody’s control — you’re just at the mercy of the fates.”

And those fates have been sealed for a little longer than one may realize. Once the final four teams got down to the St. Louis Cardinals or San Francisco Giants from the National League, and the Baltimore Orioles or Kansas City Royals from the American League — Fox Sports’s World Series ratings projections played out about the same.

For those who like long series — like the TV channels that house them — the highly-efficient 2014 baseball playoffs thus far have been a bit of a bust. In the Wildcard round, two series ended as three-games-to-zero sweeps while the other two had just one more game each, finishing 3-1. In the Divisional round, one best-of-seven series ended in the minimum four games, the other lasted just five.

Still, Fox’s cable channel Fox Sports 1 — the former Speed network — has made the most of its first playoffs, setting internal TV ratings records for the 14-month-old cable channel. It also secured its position as the fastest-growing network, thanks to its first taste of the MLB postseason action, which it won’t have when the World Series heads to parent channel Fox network.

But that’s pretty good for now, Mulvihill said of the upstart cable channel.

“I think it was everything that we hoped it would be,” he concluded. “This was almost like the second launch of the channel.”