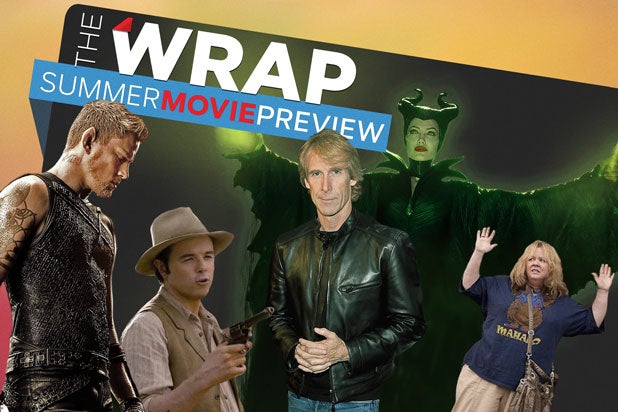 The summer movie season is getting underway earlier than ever this year with Friday’s release of Marvel’s “Captain America:Winter Soldier,” and Fox’s sequel to “Rio” the week after.

But the real blockbuster pile-up begins in May. Every week for four months, studios will release at least one movie — sometimes two or three — they expect to gross at least $100 million. Some of them — sequels like “X-Men: Days of Future Past,” “How to Train Your Dragon 2” and “Transformers: Age of Extinction” — are guaranteed to make money. But there are plenty of franchise aspirants that could self-destruct. Think “After Earth” or “Lone Ranger” last summer.

Studios will look to Angelina Jolie, Channing Tatum and Seth MacFarlane to guide them through the sand traps. But none of them are sure bets, which makes this summer all the more interesting. Here are the nine biggest questions for Hollywood over the next few months.

1. Will Michael Bay Deliver For Paramount?
Paramount has adopted a less is more approach for the summer, releasing just three movies. There is a wild card to this risk-averse strategy: Michael Bay.

He produced two of Paramount’s three movies, “Transformers: Age of Extinction,” which he also directed, and “Teenage Mutant Ninja Turtles,” an extravagant reboot of the popular comic book.

Bay is a vital partner for Paramount given his stewardship of the “Transformers” franchise, which has grossed $2.67 billion worldwide at the box office. This latest battle of Decepticons and Autobots, in which Mark Wahlberg replaces Shia LaBeouf, will gross hundreds of millions (if not billions).

Yet for Paramount to escape this summer unscathed, it will need “Turtles” to work as well. With a budget north of $120 million, that is no guarantee.

Bay, the excitable, talented alchemist of comedy and explosions will need to be something new — consistent.

2. Can Seth MacFarlane Do It Again?
Seth MacFarlane built a television empire worth billions by blending sardonic wit with childish humor. Yet many doubted he could transition successfully into the movie business.

He silenced critics with “Ted,” a comedy about a talking, drinking, womanizing teddy bear that grossed $549 million at the box office in 2012. It simultaneously initiated the resurgence of Universal and established MacFarlane as a filmmaker.

See photos:49 Summer Movies on Our Radar: From ‘Amazing Spider-Man’ to Tina Fey’s Next Comedy

Before suiting up for “Ted 2,” MacFarlane returns with “A Million Days to Die in the West,” a Western comedy produced by Media Rights Capital. Once again, he will face doubts.

We know MacFarlane can write and direct, but he also stars in this one, anthropomorphizing a voice viewers have heard for years. He has also selected a genre, the Western, which Hollywood shuns, ostensibly, because those movies don’t make money.

Well, except when a singular talent like Quentin Tarantino makes one. MacFarlane is cut from a similar cloth.

3. What Movie Will China Save?
Overeager journalists, bloggers and social media pontificators prematurely label movies flops all the time. Many buried “Noah” before it opened, just as most of Hollywood gave up on “World War Z” last summer.

Yet a funny thing happens with a lot of those “flops”: God, also known as the foreign market, intervenes.

Take last summer’s “Pacific Rim.” The movie grossed $101.8 million in the U.S., a paltry sum given its $190 million budget (and many suspect it cost a lot more). People labeled the movie a failure. Yet it saved itself from damnation by grossing $309 million overseas ($111.9 million in China alone). Will Legendary be making the sequel Guillermo Del Toro thought up? No. Was that movie a huge flop? No.

4. Will Channing Tatum Save the Wachowskis, or Will They Give Him Two Flops in a Row?
Last summer Tatum was on the cover of Vanity Fair, being crowned Hollywood’s next leading man. He had starred in a string of movies that achieved commercial success, critical adulation or both. There were romantic comedies (“The Vow”), action comedies (“21 Jump Street”), stripper comedies (“Magic Mike”) and even a drama — “Side Effects.”

“White House Down” opened in theaters around the same time that cover appeared on newsstands. A flop of colossal proportions, it precipitated a rash of changes at Sony. Few blamed Tatum for the failure of the movie, which was not very good. Yet it did test Tatum’s potential as an action star. Tatum will get a second chance in “Jupiter Ascending,” hitting theaters shortly after “22 Jump Street.”

Tatum and co-star Mila Kunis will need to rescue a couple of falling stars — Lana and Andy Wachowski — in “Jupiter Ascending.” Though responsible for one of the most electrifying and influential film trilogies in Hollywood history, “The Matrix,” they have not directed a successful film in more than a decade.

Instead, they made two pricy misfires – “Speed Racer” and “Cloud Atlas.” To avert a third, Tatum and Kunis will need to prove they can carry a movie on their shoulders.

“The data doesn’t appear to support the persistent Hollywood belief that films featuring women do worse at the box office,” the study found. “Instead, we found evidence that films that feature meaningful interactions between women may in fact have a better return on investment, overall, than films that don’t.”

So when is Hollywood going to realize this country is 51 percent female — even during the summer?

There are signs of progress: From “Sex Tape” (above) to “The Hundred Foot Journey” and “Lucy” to “Maleficent,” women star in raunchy comedies, intimate dramas, action movies and revisionist fairy tales. Next step: more women behind the camera.

6. Can Melissa McCarthy Write as Well as She Can Act?
If you don’t watch “Mike & Molly,” you may have discovered McCarthy’s comedic gifts in 2011, the year she stole several scenes in “Bridesmaids.”

Her performance as the foul-mouthed Megan in Paul Feig’s film earned her an Oscar nomination — rare for a comedy, especially an R-rated one with a deeply scatological scene involving McCarthy and her female co-stars. McCarthy has been on a tear since then, appearing in two box office hits, “Identity Thief” and “The Heat,” hosting “Saturday Night Live” twice and earning a second Emmy nomination for “Mike & Molly.”

This summer McCarthy will try to prove her worth behind the camera with “Tammy,” a movie she co-wrote with her husband Ben Falcone, the secret service agent in “Bridesmaids.” McCarthy has a handful of projects she will write and produce in development, and “Tammy” (above) could be a big help.

7. When Will Hollywood Figure Out How to Schedule Animated Movies?
DreamWorks Animation CEO Jeffrey Katzenberg argued last summer was the greatest in animation’s illustrious history. Six animated movies opening across the country in less than three months? That’s anomalous.

Katzenberg, whose movie “Turbo” suffered because of the intense competition, can remember the days when we were lucky to see two animated movies over the course of a summer — or even one.

Well, those days are back. Major Hollywood studios will release just two animated movies this summer: “How to Train Your Dragon 2” and “Planes: Fire & Rescue.”  (It would have been three had Pixar not delayed “The Good Dinosaur.”)

Four animated movies opened in a three-month span from mid-January to mid-April. Not all of them have performed as well as desired. Didn’t someone want to wait for kids to get out of school?

8. Did Four Years Off Dim Angelina Jolie’s Star Power?
Angelina Jolie was the biggest female movie star in the world in 2010. Yet Jolie, the star of “Tomb Raider,” “Wanted” and “Salt,” has not appeared in a major motion picture since “The Tourist.”

She passed the time lending her voice to “Kung Fu Panda,” indulging her desire to direct and executive producing a movie set in Ethiopia. She also earned praise for her advocacy, for charities and women’s health, among other causes.

“Maleficent,” a $130 million tale of the villain from “Sleeping Beauty,” will test whether that reprieve diminished Jolie’s box office clout or made audiences hungry for her return. Producer Joe Roth has been very successful at reviving and revising classic tales such as “Alice in Wonderland” and “The Wizard of Oz.” Will “Maleficent” repeat the success of those movies, or will it be another “Snow White and the Huntsman”?

9. If Hollywood Is Learning Its Lesson With Gender Inequality, How About Racial Inequality?
The entertainment industry has made occasional strides targeting non-white audiences, but the movie industry has never been consistent on this front. The past 12 months demonstrated the folly in this, given the “surprise” success of movies  like “The Best Man Holiday,” “The Butler” and “Ride Along” — all of which were directed by African-Americans and feature predominately African-American casts. “12 Years a Slave,” a movie about slavery directed by a British man of African ancestry, won Best Picture Academy Award, as well as an Oscar for African-American writer John Ridley.

This summer the only major releases directed by an African-America are a sequel, “Think Like a Man Too,” and a sports drama, “When the Game Stands Tall.” Meanwhile, “Get on Up,” a biopic of James Brown, one of the most outspoken and successful African-American entertainers in American history, is being directed by a white man, Tate Taylor, who last shepherded “The Help.” Latino and Asian filmmakers are nowhere to be found — unless you look in the dog days of August or love “The Fluffy Movie.”

Funny. Neither “Ride Along” or “Divergent,” two of the year’s biggest new franchises, revolve around a white man as the protagonist.

So what’s it going to take?