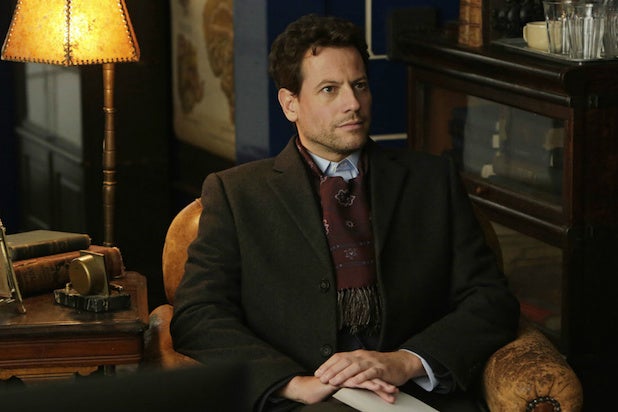 Few actors are formidable enough to distract viewers when a series is riddled with deficiencies — and Ioan Gruffudd is not one of them.

The Welsh actor, best known for a couple of “Fantastic Four” flicks, is more than handsome and charismatic enough. But he’d have to be James Spader to save the warmed-over, paint-by-numbers procedural that is “Forever.”

The ABC drama, which debuts Monday and the day after just before settling into its Tuesday night time slot, follows Dr. Henry Morgan.

He’s an immortal New York City medical examiner who gets a wicked twinkle in his eye when he figures out who the bad guy is before everyone else. This is because Henry is able to solve crimes with a recondite level of observation that can only come when a man has been around for two centuries.

Or that’s at least what the creators behind “Forever” would have viewers believe. But as anyone who has ever seen “The Mentalist,” “Psych” “Law & Order: Criminal Intent” or any adaptation of “Sherlock Holmes” can tell you, mortal guys in their 30s and 40s can develop hyper-intelligent deduction skills, too.

Making matters more confounding is Henry’s immortality itself. He doesn’t know why he can’t die or why he is always reborn in bodies of water. His inability to break on through to the other side is one of the few mysteries he cannot solve so, he became a medical examiner so he could study death and hopefully figure things out.

Sounds simple enough. But in an age of camera phones, surveillance footage, TMZ and social media wouldn’t someone catch wise to a know-it-all law enforcement employee who keeps popping up naked all over town near rivers and ponds? Plus, where do his clothes go?

These are just a few of the questions that arise in “Forever” because for something that is supposed to be the hook, Henry’s immortality is handled rather haphazardly. His everlasting life came shortly after he was killed attempting to do something noble for an enslaved black man. Although that was an honorable sacrifice, Henry’s inability to die seems like a curse or at least that’s how he sees it. He’s tired of seeing the people he loves die all around him and all the ways human beings hurt one another.

In the pilot, we also learn that Henry isn’t the only one with this affliction but as it turns out, the other person is more determined to torment Henry than help him. Because of poor execution, none of these mysteries are compelling enough to convince folks to keep watching.

As for Gruffudd’s disappearing clothes, there is nothing wrong with seeing his fit physique in the buff to be sure. But even that can get old fast if it is used too frequently for added sexiness or comic relief or both. Besides, in order to see Gruffudd moist and semi nude, the audience must first watch his character die in horrible ways. This includes being impaled in one episode and struck by a speeding truck in another.

That’s a lot of dying and when that’s added to the death or deaths of the week — this is a one-note procedural after all — the morbidity starts to mount on a series that’s already weighed down by clumsy mythology and storytelling.

Rounding out the cast are Alana de la Garza (“Law & Order”), Judd Hirsch (“Taxi”) and Lorraine Toussaint (“Orange Is the New Black”). Hirsch costars as Henry’s likable sidekick Abe and the guy who saves the day when Henry is reborn wet, naked and vulnerable time and time again. Abe is the guy who shows up with clothes, a ride and a compassionate visage. As one of the drama’s few bright spots, Henry and Abe share a touching back story.

And de le Garza costars as Jo Martinez, a beautiful but sad-eyed police detective who has undeniable sparks with Henry. She’s good with a gun and like Henry, has suffered a few tragedies. Toussaint plays Jo’s tough-talking boss Lt. Joanna Reece beginning on Episode 2. Reece isn’t so sure about Henry’s hunches but loosens the reins as her trust in Jo grows.

Meanwhile, Jo also doesn’t know why Henry knows all that he knows but she knows he’s something special. Oh brother. “Castle” called. It wants its will-they-or-won’t-they, gumshoe-driven romantic chemistry back.

But feeling familiar is the least of “Forever’s” problems. The worst offense is wasting Gruffudd’s assets on an underdeveloped premise better suited for a made for TV movie.

“Forever” debuts Monday and Tuesday at 10 p.m. ET on ABC.