Adam Sandler was the recipient of a career tribute at the Gotham Awards on Monday night, and the comedian/surprise indie darling took the opportunity to deliver a speech “written” by his two teenage daughters that brought the house down with its vascillating descriptions of self-loathing and exaggerated self-importance on the part of the “Hustle” actor.

And luckily, the full speech is now available to watch online.

“Dear well-dressed dignitaries, highly educated hipsters and various other plus ones of the Gotham Awards,” the speech began. “Thank you for giving our daddy Adam Sandler this prestigious all-time, primetime, GOAT achievement tribute award, or whatever this frankly disturbing object is supposed to f—king represent. It means a lot to him, seeing as most of the awards on his trophy shelf are shaped like popcorn buckets, blimps or fake mini-Oscars that say ‘Father of the Year’ which he sadly purchased himself while wandering in a self-pitying fog through the head shops of Times Square.”

Sandler went on to relay, through the letter, why he denied his daughters the opportunity to attend the awards ceremony. 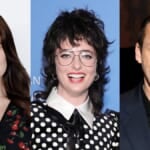 Also Read:
Adam Sandler and Idina Menzel to Reunite in Netflix’s ‘You Are SO Not Invited to My Bat Mitzvah!’

“I don’t want to spend a whole night that’s supposed to be about me and my greatness listening to you two newly pubetized buffoons screaming ‘Where is Timothee Chalamet and how can we legally squeeze that fine Jewish ass of his?’”

The speech then offered the pull-quote of the night.

“The last time daddy caught us chuckling away at the ‘Meet the Parents’ trilogy, he immediately stormed into the room he calls ‘The Screaming Room,’ which we just call the shower, and bellowed out the phrase, ‘Only the Sandman makes people laugh! F—k every other comedian!’”

Sandler also summed up the bulk of his filmography – largely made up of poorly reviewed yet beloved comedies – thusly.

The speech continued with a tongue-in-cheek dig at how his daughters (and Rob Schneider) have his 1999 film “Big Daddy” to thank for pretty much everything in their lives.

“He went on to make the comedic classics ‘Billy Madison,’ ‘Happy Gilmore,’ ‘The Wedding Singer,’ ‘The Waterboy,’ ‘Big Daddy.’ Which one is ‘Big Daddy’ again, we asked him one time. The movie with the little cutie who grows up to be Cole and Dylan Sprouse? Daddy responded, ‘I guess you could remember it as such. Or you could remember it as the movie that paid for this f—kin’ house. And your grandma’s house, and your other f—kin’ grandma’s house, Rob Schneider’s f—kin’ house, and your braces, and Rob Schneider’s f—kin’ braces!’”

Sandler also tackled his well-received dramatic turns that have landed him at awards ceremonies like the Gotham Awards.

“Daddy also starred in the film classics ‘Punch-Drunk Love,’ ‘The Meyerowitz Stories,’ ‘Uncut Gems,’ and the basketball comedy masterpiece ‘Hustle,’ films that were not only received with orgasmic critical acclaim, but also left audiences baffled as they pondered the mystery, ‘How did Bobby Boucher get all up in my feelings and make me laugh, cry and sprint directly to church to ask God why he had blessed one man with more talent than the entire cast of ‘The Poseidon Adventure’ and ‘Mamma Mia’ combined?”

You can watch the full speech in the video above.

Also Read:
How ‘Everything Everywhere All at Once’ Hit the Indie Box Office Jackpot
x