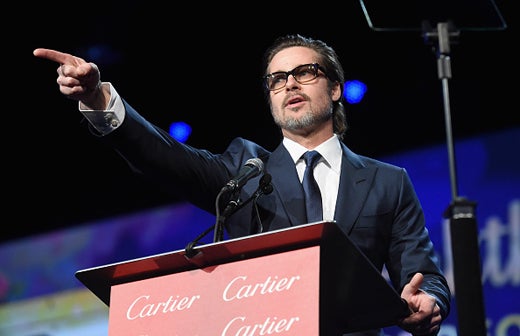 It’s hard to top a singing lesson delivered by Brad Pitt to 2,400 people, and that’s exactly what the Palm Springs International Film Festival’s Awards Gala got on Saturday night in the desert resort 100 miles east of Los Angeles.

Toward the beginning of the Cartier-sponsored gala that annually showcases many of the year’s top awards hopefuls, Pitt took the stage of the huge Palm Springs Convention Center to give an award to “Selma” star David Oyelowo, and immediately took it upon himself to teach the audience how to pronounce the British actor’s name (his name is of Nigerian origin).

“Let’s break it down,” said Pitt, an executive producer of “Selma,” asking the audience to repeat:  “Say Wo.”

“It’s worse than I thought,”Pitt said. “OK, let’s make it a song.” At that, Pitt – one of the producers of “Selma” – began singing Oyelowo’s name – and while it’s debatable that the musical rendition made the name any more easily remembered, it certainly gave the fundraiser’s audience a memory of its own.

And it gave Oyelowo one, too. “You know you’re breaking through when Brad Pitt sings your name,” said the actor with a grin as he took the stage to accept the Breakthrough Performance Award.

The gala, hosted by Mary Hart every year with disconcerting chirpiness, is also an annual showcase of awards-worthy work that comes right in the middle of the Oscar nominating voting window. Last year 10 of its 11 honorees went on to receive Oscar nominations. Though the city has only a precious few Academy members,  its track record of picking likely nominees is pretty good.

And it always provides a few notable moments as stars get to make speeches without the time constraints or pressures that will come if they get to the stage at the Golden Globes or Oscars. A few more moments to remember:

Pike, who was honored with the Breakthrough Performance Award for playing the scheming wife in David Fincher’s “Gone Girl,” talked about seeing Fincher’s “Seven” after making her first movie, the James Bond film “Die Another Day.” She told her agent that she wanted to work with Fincher, only to be told that Fincher would never cast a Bond girl.

So, she joked, she set out to subliminally make herself irresistible to Fincher through subsequent roles: “Doom,” “Wrath of the Titans,” “Johnny English Reborn…”

A pause. “But as every actor in the room knows, after ‘bingo!’ comes ‘f—!’ Not a week went by when I didn’t come home from the set thinking, I can’t do this.”

Also read: OscarWrap: Rosamund Pike and a Part to Die for in David Fincher’s ‘Gone Girl’

Shirley MacLaine presented the Visionary Award “Boyhood” director Richard Linklater, with whom she’d worked on the film “Bernie.” She said she learned more from Linklater than any director she’d worked with which, considering that her 60-year career found her working with Alfred Hitchcock, Billy Wilder, William Wyler, Mike Nichols, Bob Fosse, James L. Brooks and Hal Ashby, is a formidable assertion.

She learned so much, she said, because Linklater wouldn’t answer the questions she asked him about how she wanted him to play her character, a nasty, irascible woman. And, she added, he said “I don’t know” to other cast and crew members’ questions, too.

“It was because of him that I discovered my inner bitch,” she said. “I began to realize that this man is really smart.”

What Eddie Redmayne did on his Christmas vacation:

When he received the Desert Palm Achievement Award, “The Theory of Everything” star Eddie Redmayne thanked a number of people, including his wife. “It feels strange to say that,” he said. “My wife.”

Redmayne got married over a two-week Christmas break. He told TheWrap it was the only two weeks he’d had off since “The Theory of Everything” began stirring up awards talk at the fall festivals.

The recipe for J.K. Simmons:

Presenting the Spotlight Award to “Whiplash” star J.K. Simmons was director Jason Reitman, a longtime Palm Springs attendee who has cast the actor in every movie he’s ever made.

“If profanity, tenderness, gravitas and rage were a side you could order at McDonalds, it would be called the J.K. Simmons.”

Veteran actor Duvall received the Icon Award from Robert Downey Jr., his co-star in “The Judge,” and his rambling speech often returned to the subject of westerns, his favorite kind of movie and a genre he’d been attracted to since he was a kid.

In one of his early Western jobs, he said, he got some great advice for a veteran actor. “He once told me how to be a good cowboy: You ride up, you pull up and you shut up.”

Duvall, though, definitely didn’t shut up – and he drew laughs when he received the award, an original sculpture from glass artist Dale Chihuly, and commented, “It’s a funny looking thing, isn’t it?”

Before Moore’s relatively brief but eloquent comments when she received the Desert Palm Achievement Award for her performance in “Still Alice,” the actress was lauded in a speech by Steve Carell, her co-star in the 2011 film “Crazy, Stupid, Love.”

“She’s probably one of the most genuinely good people I have ever met,” Carell said of Moore. “I have met both Tom Hanks and Meryl Streep, and she makes both of them look like assholes.”

Who you want to be with at the bar:

“Birdman” star Michael Keaton gave the Director of the Year award to Alejandro G. Inarritu:  “We work in a business that instills narcissism, self-involvement and ego, and this is the tie of year when you pour gasoline on that fire,” he said. “So I can’t tell you how great it feels not to talk about myself tonight.”

When he took the stage, the director immediately paid tribute to his leading man.

“To get drunk with him is the best,” Inarritu said. “With my bad English and his cuckoo-ness, it’s something special.”

See video: Wrap Screening Series With ‘Birdman’s’ Michael Keaton: We Knew We Were on to Something Risky

Inarritu’s entertaining speech also included an imitation of the inner “Birdman” voice he said was telling him he didn’t deserve the award, and a benediction based on the subtitle of his movie: “May the unexpected beauty of ignorance help instill humility, grace and kindness in all of us this year.”

Why Keira Knightley couldn’t make it:

The Ensemble Performance Award went to the cast of “The Imitation Game,” but in his acceptance speech star Benedict Cumberbatch explained why one key member of the cast was missing. “Keira Knightley thought this was taking place in Palm Beach,” he said, “so she couldn’t be here.” (He later explained that he was only joking – in fact, Knightley fell ill.)

Joking aside, Cumberbatch lauded Alan Turing, the real-life mathematician and World War II code-breaker he plays in the film. “Alan Turing was a war hero, he was a gay icon, and he was the father of modern computer science,” he said.

The identity of the real party animal:

The last night of the award, the Chairman’s Award, went to Reese Witherspoon – and the “Wild” star and producer might have had the most focused speech of the night as she described the making of a film “for everyone who has ever felt lost in their life.”

But there’s another side to Witherspoon, said presenter and co-star Laura Dern. “She can turn any press junket or film festival into the best party you’ve ever been to,” Dern said. “I want to be part of any party that Reese Witherspoon is throwing.”