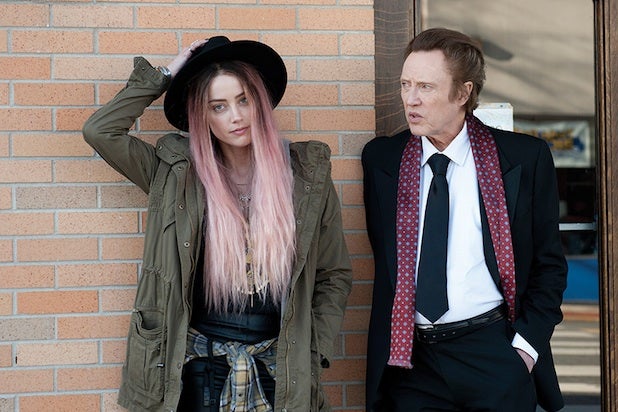 When Christopher Walken comes to the Tribeca Film Festival, people notice. Before he’s finished an interview with TheWrap in a downtown New York hotel on behalf of his Tribeca premiere “When I Live My Life Over Again,” a message has arrived from the TFF office: Please stick around, because Robert DeNiro would like to say hello.

It figures: Walken and DeNiro go back decades, coming out of the same New York scene and landing Oscar nominations together for “The Deer Hunter” in 1978. (Walken won, DeNiro didn’t.)

And now he’s come to the festival DeNiro co-founded with a new film in which he plays an aging singer, trying to stage a comeback when he writes a new song and gets a shot to open for the Flaming Lips. Written and directed by Robert Edwards, the film is a deft character study centered on terrific performances by Walken and Amber Heard, who plays the daughter he neglected in his self-centered trip through seven marriages and a rocky career.

An exclusive clip from the film is above.

TheWrap: What attracted you to this film?
Christopher Walken: I don’t know. People always assume that you decide what work you will do, but it’s really the work that decides. You can only do what’s offered.

But you must have found something attractive about the idea of playing this character.
Yes. He’s got kids, and I’ve never had children. But I’ve been in show business since I was five years old, so I understood that part of him. And I’ve done musical theater, so I’ve sung before and was comfortable with that part of him.

He’s a guy who’s pretty desperate to get his career back. I can’t picture you as ever being that desperate, but do you ever feel that kind of drive to make sure you’re still in the game?
Of course. If you’re in this business, you always feel that. Acting is one of those things, you can keep doing it as long as they ask you to do it. They say you don’t retire from acting — they retire you. And I don’t want to be retired, because what would I do?

You know, I went to the same dentist for 30 years, and the last time I went to see him he said he was retiring. I said, “What are you going to do?” He said, “Oh, I’ll play golf, I’ll travel…” I’m not going to play golf. If I retired, I wouldn’t have anything to do, and I think it’s the same for most actors.

Hasn’t Gene Hackman decided not to act any more?
Well, maybe he does other things. Charles Grodin is my neighbor in Connecticut, and I think he’s written seven books. I can’t do that, so I need to keep acting.

When you get a role like this one, what’s your process as you work on the script?
I have a table about this high [indicates chest level] in my kitchen at home, and I just start reading the lines over and over at that table. Eventually I’ll start reading them out loud, and I might try different voices, different characters.

You’ve been so widely and frequently imitated — as you’re going over the lines, do you ever get self-conscious about sounding too much like Christopher Walken?
No, and I don’t understand that. When I hear the imitations, I don’t think I sound like that. I don’t think I pause like that.

But you do often have a pretty distinctive and idiosyncratic rhythm to your speech.
Well, I will sometimes go through a script and take out all the punctuation. Or I’ll change the question marks to periods, and the periods to question marks.

That’s gotten me in trouble onstage before. When you do a play, especially a new play, the playwright is usually sitting there when you rehearse. And a lot of times they’ve come up to me and said, “You’re not doing it the way I wrote it …”

But do they eventually back down?
Some of them. But there have been times when I’ve just said, “If that’s what you want, that’s fine, but you’ll have to get somebody else because I can’t do it. I have to do it the only way I know how.”

But that’s just how I am. When I think about the letters I write, they don’t have any punctuation at all. They’re just one long sentence, and they’re all in capital letters. I never learned to write in cursive.

You hand-write your letters?
Yes. I don’t have a computer. People always ask for your email address now, but I don’t have one. I’ve never texted. I’ve never tweeted. I have a land line at home, and I sometimes have to talk on a cell phone, but there’s usually somebody around who has one.

Also read: Garrett Hedlund and Oscar Isaac Play a Hollywood Star and the Devil in Tribeca’s ‘Mojave’ — But Who’s Worse?

Your character in the film is a singer. Did you feel comfortable performing the songs in the film, and on the soundtrack?
Oh, no. I haven’t seen the movie yet, so I don’t know if it will be OK, but I told them they should have a real singer record the music, and I would just lip-sync. But they wanted me to do it. They might be sorry about that now.

But you did plenty of musical theater in the past.
Yes, but I was known more for my dancing and for comedy. And this guy has to convince you that he was once really successful as a singer. I don’t know if I’m good enough for that.

It adds to the film, though, that the singer we hear on the soundtrack is definitely identifiable as you.
I hope so. It’s good to use whatever helps.

I remember reading something that Jerry Lewis said, where they asked him the secret of his success, and he said, “I’m still seven years old.” And I thought that made a lot of sense. He might be 85, but he’s still clowning around like he’s seven.

So what’s the secret to your success?
I don’t know. I do remember getting a revelation once, when I was shooting a movie and there was a school there that went from grades one through 12. They had an art show that was separated by ages: there was a room marked 5 to 7, one that was 7 to 10, one that was 10 to 12 and one that was 13 to 15.

And if you looked at them, the paintings in the 5-to-7 room were just great, and the 7-to-10 room was ever better. At that age, kids just can’t make mistakes. They were creative and brilliant. And then the 10-to-12 room, they were starting to get conservative. And the 13-to-15 room was almost worthless.

That was a big lesson, that you can be really creative at an early age and then lose it.

As somebody who’s been in show business since you were five, do you ever think you did your best work at an early age?
Oh, no! I’m just talking about painting. Most child actors are terrible, unless you’re talking about Mickey Rooney in those movies he made with Judy Garland.

So the moral of this story isn’t that you’re trying to hang onto some essence from when you were young and free?
No, no. You need to be older to be a good actor.