“Cloudy With a Chance of Meatballs 2” is the clear front-runner in the weekend box office chase, with some projections for Sony Animation’s sequel rising as high as $45 million. The studio says north of $30 million, whole most analysts are predicting $40 million.

Doesn’t matter. This race won’t even be close.

It should, however, be a real contest for second between the Ron Howard-directed racing film “Rush,” the Joseph Gordon-Levitt sex comedy “Don Jon” and last week’s No. 1 film, “Prisoners.” All are expected to land somewhere between $8 million and $12 million for the three days.

A Fandango survey revealed “Cloudy 2” as the most anticipated family movie of the fall, and as of Wednesday, it was outselling “Wreck-It Ralph,” “The Croods,” “Epic,” and the original “Cloudy with a Chance of Meatballs” at the same point in its pre-sales cycle.

Also read: ‘Prisoners’ Could Be the Next ‘Argo’ at the Box Office – If ‘Gravity’ Doesn’t ‘Chop the Legs Off’

The first “Cloudy” movie opened about this time of year in 2009 to $30 million and went on to take in $125 million domestically and $246 million worldwide;l the animated “Hotel Transylvania”was a surprise hit on this weekend last year. That one debuted to $42 million and brought in $347 million globally, so Sony has found a sweet spot for its animated offerings.

The original film was well-reviewed and received an “A-” CinemaScore, and Sony has made clear in its marketing the sequel will offer more of the same, with young inventor Flint (voiced by Bill Hader) again attempting to right an out-of-control food machine. Anna Faris, James Caan, Neil Patrick Harris, Benjamin Bratt return from the first film, and Terry Crews, Will Forte and Kristen Schaal have added their voices.

The PG-rated “Cloudy 2” is directed by Cody Cameron and Kris Pearn, produced by Kirk Bodyfelt, and executive produced by the directors of the first film, Phil Lord and Chris Miller. Its production budget was $78 million, relatively low for an animated movie.

It will be in a market-high 3,800 theaters, but unlike the first one, none will be Imax. There is no other family film scheduled for release until Relativity rolls out “Free Birds” on Nov. 1, so it should have staying power.

While “Cloudy 2” will be dominating the family market, “Rush,” ‘Don Jon” and “Prisoners” will be battling for male moviegoers. 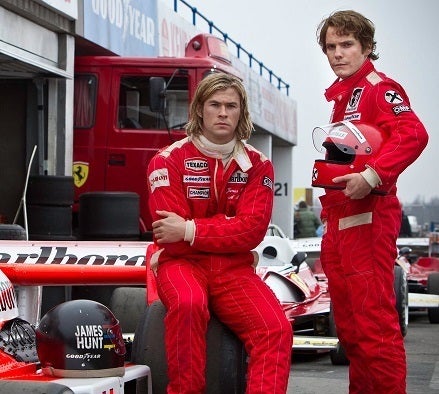 Universal’s “Rush” probably has the edge, with Howard providing an awards pedigree, and Chris Hemsworth, who’ll be starring in “Thor” next month, playing Formula One race car driver James Hunt.

The R-rated action drama follows Hunt’s 1970s rivalry with fellow driver Niki Lauda (Daniel Bruhl) and is expected to appeal most to older men, who might be familiar with the tale. Olivia Wilde co-stars.

“Rush” has a glossy 88 percent positive rating on Rotten Tomatoes, and its mature skew offers hope for a prolonged run, particularly if awards buzz around the film picks up. It averaged a solid-but-not-spectacular $37,000 in its limited debut in five theaters last weekend.

Formula One racing is far more popular in Europe and South America than it is in the U.S., and “Rush” should make back most of its $38 million production budget abroad, where it has already brought in $13 million.

It will be on 2,200 domestic screens this weekend.

Relativity’s R-rated “Don Jon” is the weekend’s wild card, in large part due to its porn-addiction plot line. 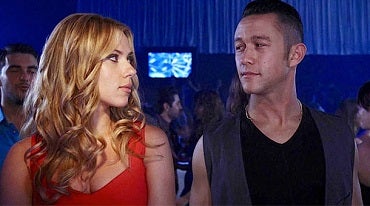 Gordon-Levitt stars in and wrote the film, in which he makes his directing debut. He has plenty of heat, coming off roles in mainstream hits “Lincoln” and “Dark Knight Rises” as well as the indie films “Looper” and “50/50.” The supporting cast features Scarlett Johansson, Julianne Moore and Tony Danza.

Gordon-Levitt plays a New Jersey guy dedicated to his family, friends, and church who struggles with intimacy and his potential true love as a result of his penchant for smut.

Its unusual subject matter will heighten its appeal for some, but could put off some mainstream moviegoers. The critics like it, evidenced by an 82 percent positive rating on Rotten Tomatoes. Its Friday night CinemaScore, which will measure audiences’ reactions and provide a gauge of its long-term prospects, will be watched closely.

Relativity made headlines with its acquisition of “Don Jon” at the Sundance Film Festival earlier this year, paying $4 million with a P&A commitment for domestic rights to “Don Jon.” The company and Gordon-Levitt have eschewed a platform release, more typical for edgy fare, and will have it in 2,422 theaters.

Also read: ‘Metallica Through the Never’ Rocks the Rebirth of Indie Picturehouse

Indie distributor Picturehouse is getting back in the game with “Metallica Through the Never,” which will begin an exclusive, 318-theater Imax run on Friday, ahead of its nationwide release next week.

Its the first Picturehouse release since Bob Berney earlier this year bought the name and trademark of the label he helped found back in 2005. Warner Bros. shut down the niche label in 2008, but Berney and his wife Jeanne have resurrected it as a true independent outfit.

“Metallica Through the Never” is rated R.

The Eugenio Derbez family comedy “Instructions Not Included” is poised to become the highest-grossing Spanish-language movie ever U.S. this weekend. The low-budget breakout hit from Lionsgate’s Pantelion Films has taken in $34.6 million since opening Aug. 30 and by Sunday could pass the $37.6 million that the Picturehouse thriller “Pan’s Labyrinth” rung up in 2006.

On the specialty front, the horror thriller “We Are What We Are” debuts in one theater in New York and another in Los Angeles via Entertainment One, which acquired rights to the film in January after it premiered at Sundance. The film was directed by Jim Mickle from a script by Mickle and Nick Damici.

In the re-imagining of the 2010 Mexican film of the same name, Bill Sage (“Boardwalk Empire”) is the patriarch of an introverted family struggling to keep their macabre traditions alive. Ambyrs Childers, Julia Garner, Michael Parks, Kelly McGillis, Wyatt Russell and Jack Gore co-star.

The Weinstein Company’s Radius label is rolling out “Inequality for All, a documentary that follows former U.S. Labor Secretary Robert Reich as he looks to raise awareness of the country’s widening economic gap.