By 9 p.m. on the night of Sept. 7, Weinstein wanted one thing above all else – the U.S. distribution rights to “Can a Song Save Your Life?,” John Carney’s film about an aspiring singer. The film had just premiered at the festival to a standing ovation, after which Carney answered questions alongside stars Keira Knightley and Adam Levine.

Weinstein would not let Carney out of his sights for several hours to come, but several major distributors shared his enthusiasm, gathering in different corners of the theater, plotting their next move. Many bidders offered lucrative financial packages, all proposed different release strategies … but only one of them offered Harvey.

“It wasn’t about money,” Marc Schipper, COO of Exclusive Media, which co-produced, co-financed and sold foreign distribution rights for the film, told TheWrap. In explaining why Exclusive chose The Weinstein Company, the conversation began and ended with the loquacious, tenacious and indefatigable co-chairman.

“[Harvey] has a long track record taking pictures and getting them rolled out so the most people can see them,” Schipper said.

The only certainty headed into the festival was that the film would sell to someone. Every distributor TheWrap spoke with in late August noted the movie’s commercial potential, and producer Anthony Bregman said a few distributors made offers before the festival began. 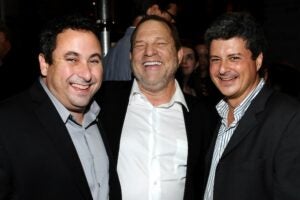 “Some of the preemptive offers were substantial; it still would have been the biggest sale at Toronto,” Bregman (pictured at left, with Weinstein) told TheWrap. “But it deserved to have its day in the court.”

At the time of those early bids, the film wasn’t finished. The plan had been for post-production to conclude at the end of September, but then the movie got into Toronto.  A few days before the festival began, audio on the film was still not synced – a problem for a movie filled with singing.

Yet Toronto is known for its hospitable audiences, and test screenings of Carney’s (pictured right, with Juliette Lewis) film affirmed this was an uplifting crowd-pleaser. As Carney’s latest film concluded its world premiere at the Princess of Wales Theater, a jubilant crowd erupted and distribution executives immediately swarmed.

“During the screening and right after we were fielding offers,” Exclusive Media’s Tobin Armbrust (pictured at above on the left, with Weinstein), who produced the film, told TheWrap. “The sale wasn’t made in an hour because there were some massively compelling pitches from AAA distributors.”

The Weinstein Company, CBS Films, Lionsgate, Relativity, A24 and Fox Searchlight were all in contention, and Armbrust soon went to the premiere’s afterparty at Patria restaurant to watch those companies initiate their “charm offensive” surrounded by plates of tuna tartare and sliders.

“You had three or four of the top suitors just camped out chasing John Carney,” Tom Rice, whose Sycamore Pictures’ co-financed the film with Exclusive, told TheWrap.

Lionsgate’s Rob Friedman and Patrick Wachsberger made their pitches, as did Nancy Utley and Steve Gilula of Fox Searchlight. And then were was Weinstein, flanked by TWC COO David Glasser.

“Whatever corner John Carney was in, [Harvey] was there,” Rice said. “John Carney went up to the bathroom, Harvey walked and sat at the bottom of the stairs.”

Rice was eight months removed from the biggest sale at Sundance, when he sold “The Way, Way Back” to Fox Searchlight for almost $10 million. His company’s second movie was on track to earn the biggest deal at another major festival — but that history would have little bearing, especially since Exclusive was in the driver’s seat this time.

Also read: How Fox Searchlight Made the Biggest Deal at Sundance: $9.75M on an Egg Sandwich 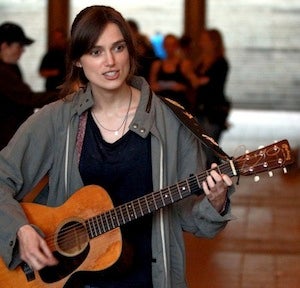 They whittled the potential suitors down to three – Fox Searchlight, Lionsgate and The Weinstein Company. Schipper and his colleagues returned to Patria betweenmidnight and 1 a.m. to huddle with the agents at CAA and UTA, Carney, his representatives at WME, Bregman, Rice and others. Weinstein, Lionsgate and Searchlight all had their moment to convince Carney once again that their approach was best.

“I’ve been doing this a long time and that was one of the craziest negotiations,” an individual familiar with the process told TheWrap. “Most negotiations go all night, but I’ve never seen a bake-off where they house everybody at a party in different corners.”

More than a dozen different decision-makers soon migrated to the driveway – or an alley, or a parking lot, depending on whose account you trust.

“They go off into the parking lot and everyone else just stood there and looked at it; you would have thought it was a bar fight,” the individual said. “There are three agents from WME, four from UTA, three from CAA, two consultants, two numbers guys, Nigel [Sinclair] and three guys from his company. There are 25 people in a parking lot for two hours.”

The party thinned out just as the bidders did, as it soon came down to Lionsgate and The Weinstein Company. Weinstein and Glasser sat on a bench at Patria while Friedman, Wachsberger (both pictured, below left, at the Grey Goose/Hudson’s Bay Party for “Can A Song Save Your Life?”) and Andrew Kramer —  a Weinstein alumnus — shared a beer. 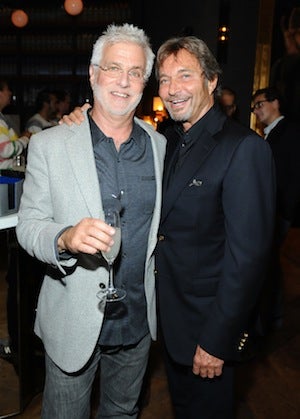 The Weinstein Company was pushing for a more gradual rollout, building commercial and critical buzz over time for what it deemed a quirky comedy. That appealed to Carney and the rest of the team.

Though TWC was not offering the most guaranteed money — around $7 million according to several individuals — it offered a hefty marketing spend, upwards of $20 million. It also boasted an unrivaled track record come Oscar season, and “the Harvey factor.”

“He was comparing it to ‘Silver Linings Playbook,'” Rice said, a collation that was “as humbling and flattering as it gets.”

The film’s team decided to enter exclusive negotiations with TWC, as Schipper, Sinclair, attorney Craig Emanuel and others retreated to Glasser’s suite at the Four Seasons to hammer out the deal. Unlike at Sundance, Rice could go to sleep – he would have breakfast with Weinstein and Glasser in the morning. Bregman waited up until 5 for reports, opting to have his breakfast before bed — a bagel and smoked salmon at the Trump Hotel.

Lionsgate would not give up without lodging a few more bids — offering more guaranteed money as the night progressed. Yet Exclusive and the sales team would remain at the Four Seasons, negotiating until 8 a.m. before splitting up for more meetings, more screenings and more deals. The Weinstein Company had more movies to acquire. CAA and UTA had more movies to sell. Exclusive had a banner year.

All of them would reconnect a couple nights later — at a party thrown by The Weinstein Company (pictured above).