The fall festivals – Venice, Telluride and Toronto – are usually a time when some movies prove they’re contenders while others see their awards hopes die.

This year, though, there was far more of the former than the latter.

As the Toronto International Film Festival comes to a close Sunday, ending a 19-day festival blitz that also included Telluride and Venice, the consensus has clearly emerged that 2013 was a very good year for the fall fests. Sure, Toronto was too crowded, too front-loaded and too crazy … but mostly, it was a festival when the most-hyped films lived up to their advance word, lesser-known movies won acclaim and buyers found plenty of ways to spend their money.

And it means, as TheWrap suggested in our mid-fest roundup, that this promises to be a very deep, competitive year in the awards race. 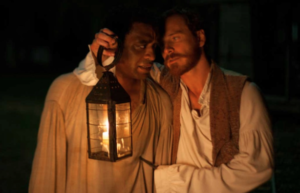 The festivals gave us a leader in the clubhouse, Steve McQueen‘s harrowing “12 Years a Slave” (right) which reinforced its position as the movie to beat by winning the festival’s People’s Choice Award on Sunday.

And they gave us another powerhouse contender in Alfonso Cuaron‘s visionary “Gravity.”  And they showcased more than half a dozen other films that could easily be in the Best Picture race: “Dallas Buyers Club,” “Rush,” “August: Osage County,” “Philomena” and “Labor Day” from Toronto; “All Is Lost,” “Inside Llewyn Davis” and “Nebraska” from Telluride.

Then you can throw in the already-released “Lee Daniels’ The Butler,” “Fruitvale Station” and “Blue Jasmine,” the upcoming “Captain Phillips” and the yet-unseen “American Hustle,” “Saving Mr. Banks,” “The Wolf of Wall Street,” “Monuments Men,” “Her” and “The Secret Life of Walter Mitty,” among others.

So unless a very strong Toronto (and Telluride, and Venice) gives way to a very disappointing fall and winter, things are about to get vicious on the awards circuit.

Just look at the acting competitors who made their cases nearly every night in Toronto: Benedict Cumberbatch in “The Fifth Estate” and Adele Exarchopoulos from “Blue Is the Warmest Color” on Thursday; Chiwetel Ejiofor and Lupita Nyong’o from “12 years” on Friday; Matthew McConaughey and Jared Leto from “Dallas Buyers Club,” Idris Elba from “Mandela: Long Walk to Freedom” and Kate Winslet from “Labor Day” on Saturday; Sandra Bullock from “Gravity,” Daniel Bruhl from “Rush” and Judi Dench from “Philomena” on Sunday; Meryl Streep, Julia Roberts, Margo Martindale and Chris Cooper from “August: Osage County” on Monday. 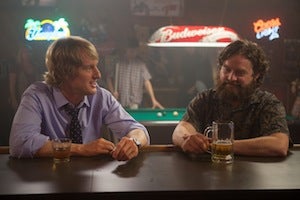 If anybody lost momentum in Toronto, it might have been Matthew Weiner, whose Owen Wilson/Zach Galifianakis film “You Are Here” (left) fell well short of the sort of raves Weiner gets for his TV series, “Mad Men.”

See video: Ashok Amritraj Grilled on ‘Life of Crime,’ and the Puzzle of Indie Filmmaking

Justin Chadwick’s “Mandela: Long Walk to Freedom” won plaudits for Elba’s performance, but not much enthusiasm for the movie itself. Bill Condon’s “The Fifth Estate” and Peter Landesman’s “Parkland” got scattered praise, but probably not enough to push them into a crowded awards picture.

And while I didn’t see the James Franco-directed Cormac McCarthy adaptation “Child of God,” In Contention reported, “I counted over 30 walkouts even before they got to the necrophilia, which is impressive.”

But TIFF 2013 was far more about the films that did well than the ones that didn’t.

In fact, in seven days in Toronto, it’s conceivable that I saw the Oscar Best Picture winner (“12 Years a Slave”), the documentary winner (“Tim’s Vermeer”), the foreign-language winner (“The Lunchbox,” right) and the animated-feature winner (“The Wind Rises”) – though it’s also possible, in this highly competitive year, that some of those won’t even get nominated in their categories.

I also saw some unexpected treats, including first-time director Ned Benson’s audacious and haunting two-part drama “The Disappearance of Eleanor Rigby: Him and Her” and John Carney’s delightful “Can a Song Save Your Life?” Both of those films debuted to acclaim and won deals with the Weinstein Company, while a lively fest for deals also saw Focus Features buying Jason Bateman’s profane and twisted directorial debut, “Bad Words,” and CBS Films landing the fresh romantic comedy “The F Word.”

The hot company at the festival was probably Weinstein, which picked up two of the biggest titles in “Eleanor Rigby” and “Can a Song ..?” and also managed to pull off a surprising coup when “August: Osage County” director John Wells was allowed to introduce his film before its first Press & Industry screening. 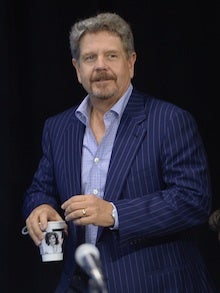 Typically, filmmakers are encouraged to attend public screenings, but banned from P&Is – but with festival director Cameron Bailey on hand to introduce him and Harvey Weinstein watching, Wells (right) was given a microphone and a spotlight in front of his industry audience.

(A spokesperson for the festival said that directors are occasionally allowed to introduce P&I screenings if “extenuating circumstances,” such as delays for technical issues, are present. She said the original “August: Osage County” screening had been delayed.)

Of the 45 Toronto films I saw before, during and after the festival, my 10 favorites included the two most buzzed-about titles, “12 Years a Slave” and “Gravity.” Both came in with sky-high expectations, both delivered, and both stand near the top of the awards race, with the former a clear frontrunner.

I also loved the two big Weinstein acquisitions. “Can a Song Save Your Life?” captures some of the same playful, gentle and touching spirit of John Carney’s “Once” but with Keira Knightley and Mark Ruffalo. And “The Disappearance of Eleanor Rigby: Him and Her” was for me the fest’s biggest and most moving surprise, an ambitious and wrenching pair of linked films that together detail two perspectives on a marriage being torn apart.

“The F Word” brought something fresh and spirited to the romantic-comedy genre, with wonderful performances by Daniel Radcliffe and Zoe Kazan. Ron Howard’s “Rush” joined “Gravity” as a major-studio movie that manages to be consistently exciting without sacrificing emotion and depth.

Next up on the festival circuit: the New York Film Festival, which kicks off on Sept. 27 with Paul Greengrass’ “Captain Phillips” (it’s already screened, and it’s tense and terrific) and also includes the premieres of Spike Jonze’s “Her” (which has a lot of advance heat) and Ben Stiller’s “The Secret Life of Walter Mitty” (ditto).

The race is on, and the track is already crowded.