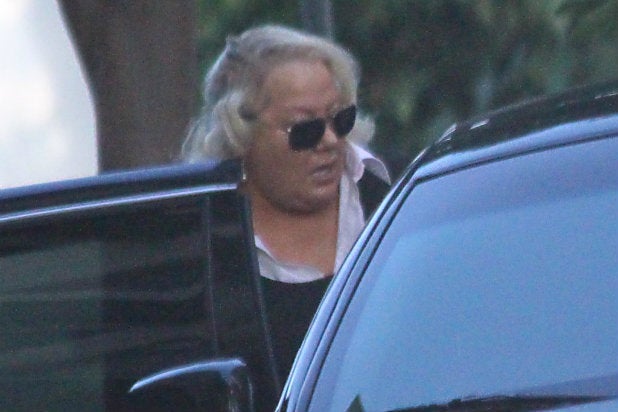 Nikki Finke, an elusive media figure in the Hollywood trade world, has been “exposed” in more ways than one.

A group called the Committee for Decency in Journalism launched a website Wednesday, NikkiStink.com, which not only details specific instances she has “threatened and bullied the Hollywood community,” but unveils the current appearance of the notoriously camera-shy founder of Deadline Hollywood.

“You will be a decent journalist or you will not be treated decently yourself. Get your head out of the sand and act like a human being. If not, as you can see, we are going to fight back – aggressively and relentlessly. This set of photos is only the beginning.” the site writes. “There is much more. A lot more. We are motivated and have unlimited resources to see this through to the end.”

The group followed a string of clues — including a tweet from Bret Easton Ellis — to track down where Finke lived, and then captured her leaving the West Hollywood apartment building on camera and video.

The website posted pictures of the blond, former editor-in-chief of Deadline and declared, “GOTJA,” a riff on Finke’s tendency to boast to readers: “TOLDJA!”

The site, whose founders remain anonymous, lists 78 people in Hollywood (including the founder of this site, last on the list), who have been “needlessly hurt” by her, including Robin Williams, former NBC chief Ben Silverman, former Universal chairman Marc Shmuger, another former NBC chief Jeff Zucker, former Deadline publisher Lynne Segall, Lena Dunham, Oprah Winfrey and dozens of others. The letter cites her barb-tongued comments about each.

“We are tired of you Nikki.  Your threats and bullying will stop today.  Your greatest weapon has been your reclusiveness, which allows you to attack others without their opportunity to see the real you,” the site reads. “You hide behind your computer screen.  Dark, elusive, and mysterious.  No more Nikki.  We have now taken that away from you.  For many many months, day and night, we have been watching you and waiting for the right moment to pierce the veil of secrecy surrounding you and your appearance.  Our hard work and patience has paid off.”

The Penske Media Corporation bought Deadline in 2009, but tensions between CEO Jay Penske and Finke ran high in summer of 2013.

Sources told TheWrap that Penske planned on firing her then, but Penske denied the claims. Months later, however, Finke went public with her frustrations, and eventually announced she planned on leaving the company and launching NikkiFinke.com after lawyers “disentangle” her from Penske Media.

PMC finally officially confirmed the split in a November post on Deadline Hollywood, the website she founded in 2006.

“Despite attempts by all to have it go otherwise, Nikki Finke will no longer be leading Deadline Hollywood, and she will not be writing weekend box office or filing stories going forward. This is an emotional and painful parting of the ways for us,” wrote Deadline co-editors Mike Fleming Jr. and Nellie Andreeva wrote at the time.

Subsequently, Finke went silent while she waited out a non-compete clause on her contract before launching her own website NikkiFinke.com earlier this year. Finke admitted on her new site that she had been “terminated” by Penske. Finke went dark again Aug. 11 after filing a post on the death of Robin Williams, which according to a BuzzFeed report was potentially her last on the self-titled site.

Finke has been clashing with Penske ever since her launch. Final resolution in the legal battle between between the two has not yet been reported or disclosed.

Finke and PMC have not yet responded to TheWrap’s request for comment.