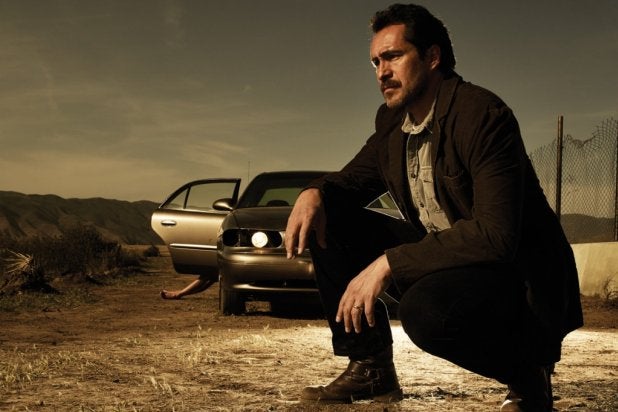 Emmy voters, after all, are creatures of habit who tend to go for the same shows and performers over and over. But while we have nothing against “Modern Family” and and Claire Danes, TV is so vast and so good that lots of worthy shows can stay on the air season after season without ever landing Emmy nods.

Bryan Cranston, Hugh Bonneville, Jon Hamm and Damian Lewis have a strong hold on this competition, joined last year by and . With all six turning in solid performances once again, and certain to get a nomination for “True Detective,” it’s going to be harder than ever for fine performances like the ones we’ve listed her to get noticed.

Demian Bichir, “The Bridge”
Bichir came out of nowhere to land an Oscar nomination for “A Better Life” in 2011, but it’ll be even harder to crack the Emmy drama-actor lineup. That’s a shame, since Bichir and Diane Kruger tackle a hot-button issue and put a new spin on some old tropes as Mexican and American cops working together to take down a serial killer working the border. –Steve Pond

Hugh Dancy, “Hannibal”
“Hannibal” always dances at the edge of silliness – the black humor both offsets the violence and makes it seem even darker. Dancy has the thankless job of playing straight man to a titular lead character who kills people, eats them, and has the panache to frame Dancy’s Will Graham for the murders. Dancy is convincingly vulnerable and brilliant at once, a mix that arguably makes him an even bigger draw to “Hannibal” than Hannibal. Why isn’t he likely to be nominated? Well, his show is pretty gross. –Tim Molloy

Ted Danson, “CSI: Crime Scene Investigation”
Who knew that the former bartender from “Cheers” could reinvigorate a flagging franchise, but that’s exactly what Danson did when he took over the lead role on CBS’s flagship series in 2011. Since then, Danson has proven his versatility by tackling the darker subject matter of this gruesome procedural while maintaining a light and more accessible air than either of his predecessors. Heading into its 15th season, “CSI” still feels like a fresh show, thanks to Danson’s leadership. Nominated for work throughout his career, Emmy is unlikely to acknowledge his work on a crime procedural series. Only Mariska Hargitay seems to have cracked that particular code. –Jason Hughes

Clark Gregg, “Marvel’s Agents of S.H.I.E.L.D.”
When asked to name a favorite leading dramatic actor in Hollywood, Clark Gregg probably doesn’t even pop into Clark Gregg’s mind. But he handles being the “normal” guy in Marvel franchises exquisitely well. Not only is Gregg under-appreciated for his wit and comedic timing, he knows how to deliver on the sincere scenes as well. Somehow, he consistently steals scenes from (sometimes literally) larger-than-life comic book characters. Gregg is a talented pro who hopefully one day will get his due — just not this year on this show. –Tony Maglio

Freddie Highmore, “Bates Motel”
Taking on a role as iconic as Norman Bates is a daunting task. Freddie Highmore’s portrait of the psycho as a young man on the A&E drama “Bates Motel” is such a convincing portrayal of cherub-faced, manipulative evil that you half-believe he actually thinks he’s innocent. –Tim Kenneally

Charlie Hunnam, “Sons of Anarchy”
What’s harder than holding a motorcycle gang together when it’s mired in inner turmoil and on the brink of collapse? Making viewers feel protective of a character who’ll commit any heinous act in the name of keeping the gang intact. Somehow, no matter how bad Hunnam’s Jax Teller gets, we can’t help but hope that he comes out of it all OK in the end. –TK

Tom Mison, “Sleepy Hollow”
Who is this guy and where did he come from? With his first major American role, Mison immediately commanded the screen as Ichabod Crane on the Fox hit, truly convincing viewers that he was a man out of time. His performance was effortless, growing more assured as Ichabod became more comfortable in the modern world. His gravitas keeps the show from going off the rails with some of its more ridiculous plotlines. Instead, everything revolves around Mison in a mesmerizing performance that’s not easy to forget. –JH

Timothy Olyphant, “Justified”
We fell for Olyphant in the days when he did the morning sports report on an L.A. radio station by thumbing through the sports section on the air. It’s unlikely many Emmy voters were listening back then, but they shouldn’t need those memories to be as impressed with his righteous, cowboy-hatted and occasionally trigger-happy U.S. Marshal Raylan Givens, a performance that has won plaudits from now less an authority than the character’s creator, novelist Elmore Leonard. –SP