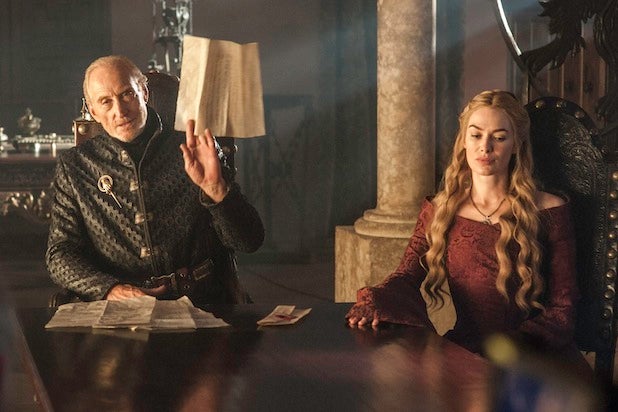 You could almost fill out a slate of supporting drama nominees from just a couple of shows – “Game of Thrones” and “Breaking Bad” alone teem with contenders, as you can see from our lists below – which don’t even include the favorites from those shows, among them Anna Gunn, Emilia Clarke, Betsey Brandt, Peter Dinklage, Aaron Paul and Dean Norris among them. In these brutal categories, here are a few who likely deserve better.

Charles Dance, “Game of Thrones”
“Game of Thrones” actor Peter Dinklage stands tall at the Emmys, but every great hero needs a great nemesis — and few were as impressively evil as the Lannister patriarch and puppetmaster, who calmly condemned his son to death and then got his comeuppance so memorably.  –Steve Pond

Peter Krause, “Parenthood”
The NBC drama has mostly been overlooked by Emmy voters during its five-year run – but this season Krause, Max Burkholder and Monica Potter all turned in stellar work in a wrenching storyline about Max’s struggles with Asperger syndrome. –SP

RJ Mitte, “Breaking Bad”
It’s easy to overook Mitte’s subtle performance as Walter White Jr. throughout the run of “Breaking Bad,” because he was the character always in the dark. In the final season, though, he learned the truth, and Mitte’s performance as he vehemently rejected his father was both triumphant and heartbreakingly painful to watch. On this show, though, there are just too many great performances ahead of his for him to have a chance at a nomination.  –Jason Hughes

Bob Odenkirk, “Breaking Bad”
It’s not easy to inject comic relief into a series that traffics in cancer, brutal death and drug abuse, but Odenkirk did so masterfully as “Breaking Bad’s” resident ethically flexible lawyer, Saul Goodman. There’s a reason they gave the guy a spinoff, and it’s not just because the nation is still collectively suffering from “Breaking Bad” separation anxiety.   –Tim Kenneally

Jesse Plemons, “Breaking Bad”
Plemons’ characters in “Friday Night Lights” and “Breaking Bad” could not have been any more different, and he was excellent in both. As a matter of fact, his portrayal of uber-calm pure bad dude Todd on the latter was even more impressive following his aw-shucks job on the former. Plemons made people fear him on AMC, not easy for someone who looks and speaks so unassumingly.  –Tim Molloy

Scott Wilson, “The Walking Dead”
A veteran actor of stage and screen, Wilson might have seemed an unlikely choice for a post-apocalyptic zombie epic, but his portrayal of Hershel Greene brought a sense of humanity to the group. He was the moral compass that might have otherwise been lost, and his acting performance elevated the rest of the cast, turning a show of wooden actors into a talented ensemble. Despite being the biggest show on basic cable, it’s still a show about zombies, and that’s enough to keep it perpetually overlooked for major awards.  –JH

Laura Carmichael, “Downton Abbey”
Now that we’ve seen so much of Lady Edith, it’s hard to believe that “Downton Abbey” kept her in the background for so long. Carmichael stole as many plotlines as she has scenes in this eligible “Downton Abbey” season. Sorry Lady Mary, you’re great and all — but the fans want even more Edith. We suspect the producers have that up their sleeve for the future.  –TM

Miranda Hart, “Call the Midwife”
This gentle British import came to life with the addition of Hart to its cast midway through the first season. The statuesque comedian seemed an unlikely fit for the period drama about midwives, but her innocence and good heart proved endearing both to her fellow midwives, and to viewers. She’s already won a National Television Award in the UK for her performance, but this PBS import is too overshadowed by “Downton Abbey” on the same network to get any attention from Emmy voters.  –JH

Lena Headey, “Game of Thrones”
Her son was murdered, her father was murdered, her brother raped her (or did he?) and her other brother escaped her clutches in the final episode. It wasn’t a good season for Cersei, the only surviving Lannister We Love To Hate, but it was a juicy one for the woman who plays her with quiet gusto. –SP

Considering that the show she’s on has progressed 10 years in the seven it’s been on television, Shipka has found herself now portraying someone older than she is. And yet the 14-year old actress is totally convincing as an older teen, struggling with her own sexuality while she tries to reckon the horrible things she’s learned about her father. Shipka is a rare child actress who is more than just a great actress “for a kid.” She’s a great actress, period. And yet, because she is a child, she’ll continue to be overlooked, despite consistently giving one of the strongest performances on a show filled with great actors.  –JH

Maisie Williams, “Game of Thrones”
Most of the season was a two-hander between a brutal, hulking bounty hunter and a scared young girl who grew angrier, meaner and deadlier by the week. Williams’ performance as the girl gave Arya Stark the upper hand as often as not, and proved that the Stark bloodline is in good little hands.   –SP

Alison Wright, “The Americans”
Sure, the spotlight falls on Keri Russell and Matthew Rhys — and their myriad disguises — on this FX drama. But it’s Wright’s trusting secretary Martha Hanson, so cruelly manipulated by Rhys’ character, who effortlessly strums viewers’ heartstrings, even as they wonder how she can be so blind.   –TK