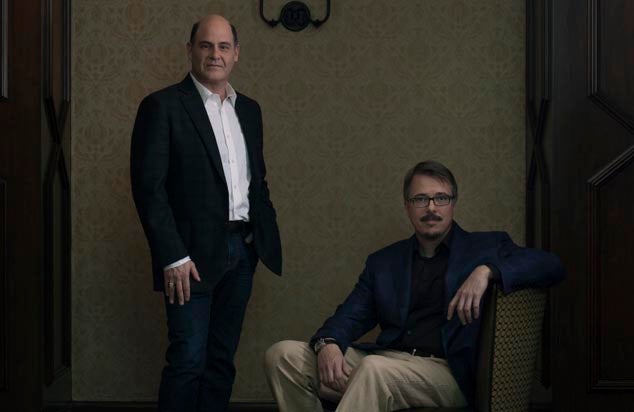 Photographed by Stephanie Diani for EmmyWrap

Matthew Weiner and Vince Gilligan have been running on parallel paths since Weiner’s “Mad Men” premiered on AMC in 2007 and Gilligan’s “Breaking Bad” followed on the same network the following year. Their shows have won multiple Emmys, including four Outstanding Drama Series awards for “Mad Men” (2008-2011) and one for “Breaking Bad” (2013). And now they’re both ending their series — Gilligan with a rapturously-received final season that aired last summer and is now eligible for Emmys, and Weiner, with 14 concluding episodes, the first half of which ran this year and the second half scheduled for spring, 2015.

TheWrap spoke with both men about their show’s humble beginnings, meteoric rise and the anxiety they felt over closing things out in a meaningful way for two shows that helped define a network, and influenced its viewership in a whole new way.

Photographed for TheWrap by Stephanie Diani

When you’re coming to the end of a show that has been as well received as your two shows have, how large does it loom in your thoughts?
VINCE GILLIGAN: Man, the last year and a half before the end of “Breaking Bad,” I couldn’t sleep at night. Hopefully you’re not having it as bad as I had it.

MATTHEW WEINER: Was it worse than the first year of the show?

WEINER: ‘Cause in terms of anxiety, that first year terrified me more than the ending of the show.

GILLIGAN: You know what, though? The first year for me, it was a little like having sex for the first time. I was like, “I’m just amazed that I’m doing this at all.”

GILLIGAN: That was the pressure of, “Can I even put a show on the air? Can I do this job at all?” That provoked a great many nightmares and sleepless nights for me in the early days. But in the final season, it had shifted. I knew I could do the job, but was I going to fail completely with the ending, in terms of people’s expectations? You’re still having sleepless nights, but you’re having them for a different reason.

GILLIGAN: Oh, I got lucky.

WEINER: The weird thing for me is that it’s so against the entire job of writing episodic television to conclude something. TV is all about a certain lack of resolution that makes you come back next week. The idea that it’s the end of the whole story, that’s just not in my skill set, you know?

GILLIGAN: That’s a very good point, and one leg up we had on “Breaking Bad.” “Breaking Bad” was designed to be a finite, ultimate, close-ended story. I didn’t know how long the story would go, but I knew it was a continuum, from A to Z.

Did you know from the start that however long the story lasted, it was going to end in Walter’s death?
GILLIGAN: I think I knew in the early days, and then I didn’t know for many years. You want to be like Muhammad Ali, you want to keep bobbing and weaving, and the deeper I got into it the harder it was to see the forest for the trees. But I knew that I always needed to abide by the original premise — which is we’re gonna take a good guy and turn him into a bad guy. And to be fair, it always did feel right that he should die at the end. Unlike Walter White, who was on an inexorable downward path, “Mad Men” can obviously go in many different directions with Don Draper at the end.

WEINER: I don’t have a genre, that’s my problem. And it’s a serious problem. [Laughs.] We have arguments in the writers’ room, but they’re not about whether he lives or dies. I’m not going to reveal anything, but I’m not in that world. It’s a matter of not getting lost in the storytelling. Because in the past I’ve found myself saying, “Do Don and Betty really have to get divorced? Can’t they just separate? Does Don have to get fired?” And my writers will remind me, “Yes, the agency has to fire Don. He screwed everything up, he ripped off Joan, he destroyed Peggy’s personal and professional life and he had a psychological meltdown in a business meeting. He’s gone.” They have to talk me into pulling the trigger on it, because I’m afraid.

Yet as viewers, we are still on Don’s side much of the time.
WEINER: I think that’s about casting. That’s Jon Hamm — I got nothing to do with that.

WEINER: You had the same thing, Vince. Walter White isn’t a good guy, but you can’t help but like Bryan Cranston.

GILLIGAN: You do. It’s funny, because I love Bryan, but I got to the point as the seasons progressed that I really didn’t like Walter White.

GILLIGAN: I lost sympathy and respect for him. I still found him fascinating, and I think I’m on solid ground as long as I find him fascinating. But I regained a bit toward the end of the series, when he admitted to himself and his wife, “I do what I do for me, for myself and my self-aggrandizement. I was lying all those years I said I did it for you and the family.” It’s interesting, because you and I and so many other showrunners now have this freedom to tell stories of antiheroes and less-than-sympathetic characters. But I think at the end of the day, you have to like Don Draper on some fundamental level. You have to like Walter White on some fundamental level.

WEINER: I agree with all of that except that I’m mystified by this antihero thing. I think Don’s an Everyman, and Walter White has cancer, for god’s sake. What exactly is it that they’re doing that’s so unpleasant? Murder makes you harder to root for, but I didn’t see a lot of unjustified murder in Walter’s life. I mean, Darth Vader is my favorite “Star Wars” character. He’s a lot more interesting than Luke. Look at Popeye Doyle in “The French Connection.” Roy Scheider in “Jaws.”

WEINER: Michael Corleone, exactly. Talk about someone with a difficult childhood. I never work on sympathy and antipathy. The most repulsive character in the history of television is George Costanza, and I love him, I love him, I love him. I hope that I am never like him, but I love him. So I love Don. I guess he’s murdered one person by accident, he caused his brother’s suicide by giving him money, he’s done a lot of bad things. He’s not loyal, he’s not faithful. But I give him a lot of points for trying hard. [Grins.] And I don’t want to go out on a limb here, but I think he has a bit of a substance abuse issue.

GILLIGAN: He’s still a guy I’d like to have a beer with.

GILLIGAN: I couldn’t keep up with him, but it’d be fun to have a couple.

Let’s go back to the beginning. “Mad Men” was the first new series on AMC when they made the move to original scripted programming, and “Breaking Bad” was the second.
WEINER: Yeah. I spent a lot of time — particularly after I read the “Breaking Bad” pilot — saying, “What is the brand of the network?” These are two radically different shows that probably have very different audiences. But the thing we had in common is that both those scripts had been around for a while — mine had been around for five years, and I think Vince’s had been around for two or three. Christina Wayne and Rob Sorcher, who ran the network, had basically gone through everybody’s garbage pail and pulled out these two things. Both the scripts were well-respected, but things get tainted when they’ve been around for a while.

GILLIGAN: We had struck out all around town with “Breaking Bad.” And my agent called me up one day and said, “I’ve sent your script to AMC. You know AMC?” And I said, “Yeah, the one that shows ‘Short Circuit 2’ over and over again.” He said, “Well, they’re about to get into the scripted business, and they have a show called ‘Mad Men’ about the advertising world in the ’60s.” And I sat down with a couple of the AMC executives, not thinking “Breaking Bad” would go anywhere. But they were as good as their word, and their word was they wanted to build a network based on scripted shows, much like HBO and FX. The conventional wisdom is that they’ve helped usher in a spectacular era in television.

WEINER: I don’t believe this “Golden Age of TV” crap. It’s kind of insulting to the history of TV.

GILLIGAN: I think it is a golden age. But it’s not the golden age. There’s been many, going back to Rod Serling and Paddy Chayevsky writing for TV in New York.

WEINER: But I think the change that happened most recently was “The Sopranos.” When I started, executives were like, “Keep remaking the pilot. A dedicated viewer of the show ‘Friends’ only watches six shows a year. You can’t do an arc.” And here was “The Sopranos” — an event, a thing that people paid for. And it was only a fraction of the percentage of people who owned televisions. That’s really the thing — HBO was in 20 million homes or something, and here it was a successful business internationally. And by the way, I say this as a fan. I was just a working stiff at that show. And I didn’t get there until the very end of it. I’m talking about the first season of “The Sopranos” — which for all of us working in TV, was like, “What is this?” It opened up the idea that you could get a smaller percentage of the audience, and it allowed us to make more peculiar, specific TV shows.

GILLIGAN: There would be no Walter White without Tony Soprano. There truly wouldn’t.

How much pressure are you feeling on what you’ll do next?
GILLIGAN: Well, rightly or wrongly, I’m following with a show very much in the same universe, a spinoff show [“Better Call Saul”]. I’d love to have a year or two off if I knew I had another job waiting on the other end of it. But I know myself, and I would start to brood, and start to triple-guess and quadruple-guess and quintuple-guess every idea I had. That may indeed come, but I’m forestalling it now by launching into this thing. Of course, with this spinoff we don’t know yet if it’s going to be “Frasier” or “AfterMASH.” [Laughs.]

WEINER: We keep working. It’s our job. You did one thing, and that success exceeded your expectations, changed your life, gave you a family… I’m gonna get all emotional, so I’m not going to give this speech right now. But it’s a lot of the story of the show: What happens when you get what you want? How do you stop touching wood? So for whatever reason, I’m going to take some time off and hopefully know what’s on my mind. But there is a terror when you’re on a treadmill and you step off of that thing while it’s rolling. [Laughs.] I’ll tell you who’s really going to suffer: it’s my family. They think they miss me, and I say I miss them, but I pity them. I’m gonna be all up in their shit. I’m going to be, like, organizing everything, messing with everything that I don’t care about right now. “Why doesn’t this work? Where’s that remote?”