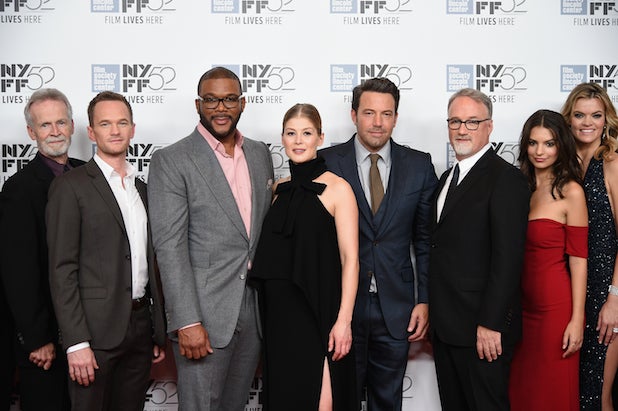 On a stage that included a best-selling author, an Oscar-winning actor/director, a billion-dollar filmmaker, a Tony-winner and, oh yeah, the breakout bone-chilling actress at the center of the film that just screened, nearly all of the audience’s attention and affection still went to director David Fincher after “Gone Girl” premiered for press and industry members at the New York Film Festival.

Not that he didn’t deserve it; the psychosexual mystery thriller’s cold blood is filled with Fincher’s DNA.

Ben Affleck, who plays Nick Dunne, the husband and potential murderer of his wife Amy (Rosamund Pike, the aforementioned bone-chiller), sang Fincher’s praises the loudest when one reporter asked each cast member to talk about what they learned from the director.

“I’ve gotten at this point in my career as an actor, I’ve decided it’s all about the director,” Affleck said. “And when David called me, I would have done the phone book with David, so you can imagine my relief when it wasn’t just an alphabetical list of names, but it had a story…. Before all three of my movies I’ve directed, I’ve watched ‘Seven'; I feel like it’s the most perfectly, meticulously Swiss watch-made thing, and I think, what kind of person makes a movie like this?”

Seeking to play down the coming praise, Fincher joked, “A Swiss person.”

Laughs abound, but it didn’t stop Affleck from completing his praise.

Later, Affleck continued to heap praise on Fincher, who he said was “the only guy I met who is genuinely an actors’ director and has one of the deepest and most [complete] understandings of the technical aspects of film and video and filmmaking of anyone I’ve ever worked with.”

Tyler Perry, another one the actor/directors that Fincher cast, similarly swooned over the filmmaker’s approach to the pulsating, darkly comic look at marriage, the media, and crime.

“For me, it was the greatest learning experience I could have had. I couldn’t even imagine learning more in any other place from any other director,” Perry said. “I say this a lot about his eye. People say he does a lot of takes, but what I realized early on is he sees everything at once. I don’t think he sees like regular humans, he sees this perfect tableau and if one thing’s out of place, it has to be redone. And the level of brilliance — of genius it takes is so impressive to me, and I walked away hopeful that one day I’ll do better in my own films.”

Neil Patrick Harris, who played a giant creep, praised Fincher’s vocabulary and his ability to speak with actors in a way that wasn’t commanding or patronizing, but encouraging. “He wasn’t talking at you, he was talking with you. That’s what I sort of got from him, was an empowering ability to work harder, and yet a calm comfort and confidence that you knew you were in good hands.”

“I think it’s such a silly thing to talk about, what you do to actors, I don’t think you ever enter into the shepherding of something that is this expensive and this complicated without letting them know we’re all doing this together,” Fincher said. “It’s about how many bites of the apple we give to the people who are perfect for the part to make it more concise, make it more human, make it less presentational, and so I feel like this whole thing of it’s inflicted, and it’s not; it’s like we’re all doing this together, we have to work as a ballet company.”

And so, yes, there were nice things said about other people on stage, as well. The director himself gave much credit to Gillian Flynn, who adapted her huge best-selling book into a more taut screenplay.

As for the acting, Pike spoke about the multitude of personalities that her character cycled through, changing as required by the circumstances and her own perhaps faulty inner-wiring.

“I don’t think she could’ve been a man, the way her brain works is purely female,” Pike admitted. “People don’t like me for saying that, but I think it’s true. In a lot of movies, a strong woman is being like a man, but she’s strictly female.”

Weight fluctuation was also involved — both for the actress, and her leading man.

“Ben was becoming Batman before my eyes — by the time we were in the shower, I was with Batman,” she cracked, one of several jokes about Affleck’s turn as the Dark Knight.