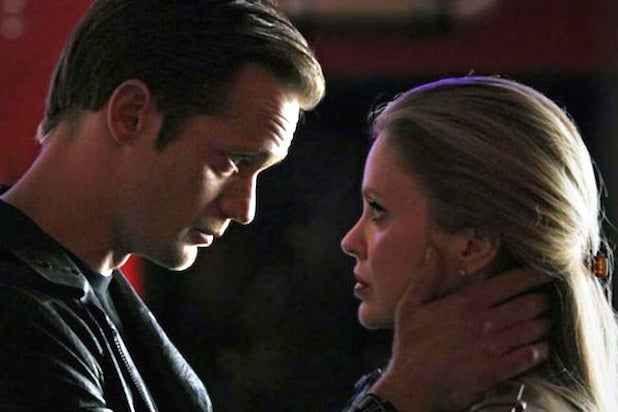 “True Blood’s” series finale on HBO on Sunday presented a whirlwind of closure for the characters fans have fallen in love with over its seven seasons.

Everyone reached a happy ending that included love and family, which was revealed when the remaining characters reunited for Thanksgiving years later.

But which storyline left a door open for “True Blood” to live on in a spinoff? Although reluctant to answer, “True Blood” showrunner Brian Buckner revealed his pick.

“Oh, wow, should I take that bait? OK, I’ll do it,” Buckner told TheWrap. “I believe that there is life in Eric and Pam running a multinational corporation.”

When we last left Alexander Skarsgard and Kristin Bauer van Straten‘s characters, the dynamic duo were making billions selling the Hep-V antidote. They even had a side business where extremely wealthy vampires could drink right from the source of “NewBlood,” Sarah Newlin (Anna Camp) herself.

Buckner went on to describe he and his team’s choices for Sunday’s “True Blood” series finale on a press call on Monday.

What’s the identity of the man Sookie ended up with? And was there a different version of the finale where we did see his face?
Brian Buckner: No, there wasn’t a different version. The deal was we wanted Bill to be correct when he said that Sookie can have a normal life. The twist, of course, being that Sookie chose to keep her power and specialness and persevere despite his belief that she couldn’t be OK without giving up her powers. Charlaine [Harris] took a lot of abuse for choosing Sam. We felt like it was irrelevant who Sookie wound up with. What we wanted to know was that she was happy and living the life she wanted to lead. To introduce some other stranger in the last five minutes of the finale wouldn’t have made a lot of sense. So, we made a choice to say it’s “every man,” it doesn’t matter. We basically cast the man with the best arms from our stunt crew.

What were the hardest aspects of shooting the final season?
The way we had to shoot the season due to other commitments the actors had was that we were sort of shooting Episodes 7, 8, 9 and 10 all at the same time, which was a production nightmare. But, it also made the last two months of our season a series of goodbyes where we were shooting final scenes for certain actors two months before we were actually wrapped. So it was hard to say goodbye, because everybody became really, really tight. So, the heaviness of the end sort of hung over everything we did for a very long time. It felt like we were waiting for death. I would say it was the emotional impact of wrapping up something. And then I would say today is the hardest, the day after.

Can you talk about wrapping up the romantic relationship between Sookie and Eric? And what about Hoyt’s relationship?
When he and Sookie got together this season, there were heavy romance values. But, we had a show that had so many points of entry and for a long time trying to give every character a storyline became cumbersome and things got extremely choppy. So, as I announced last year at Comic-Con, we were going to narrow the focus, narrow the number of storylines we were telling and become overall more specific. All that to say that when Eric and Sookie got together this season I was really impressed with the romantic undertones of the scene, but nothing was overt. We didn’t go back there, because it would’ve been sloppier storytelling-wise. Regarding wrapping up the Eric storyline earlier, when I talk about the way we had to shoot things, for the last couple of episode someone had a commitment to “Tarzan.” So, his story at originally conceived actually ended around Episode 8 or 9.

Then when I started writing Episodes 9 and 10, I realized I needed more complications. And I thought it really fitting to sell Sookie out on Episode 9 and rescue her at the top of 10. Again, we had a daytime wedding in that episode  and our way of thinking is that if a vampire doesn’t have to endure the daytime bleeding, we don’t [use them]. So, Eric’s storyline sort of wrapped up there, I thought rather fittingly, then he sort of end up in our epilogue. But, we didn’t know we’d even have him for the 10th episode, then adjustments were made.

Again, and not to get terribly defensive, I will address Hoyt. That’s a Jessica story. And Bridget was a Jason story. You can’t break episodes by saying every character gets five minutes of screen time. It’s not the way you can tell a story or approach writing scripts. You’ve got to be telling stories and let the stories dictate the screen time… I’ve done a little bit of reading today, guys, just so you know.

Was anyone else considered having anyone else die on the finale aside from Bill?
No, not on the finale. We were pretty prepared for the season. Other than considering at one point having Sookie give up her powers, which would have changed the epilogue portion of the finale, we came to where we wanted to come to by the time we got to the end of the season. I wanted to create a sense this season that anything could happen. That’s what the Tara death did and then the Alcide death furthered that. We didn’t have any plans to knock anyone else off.

Throughout the series, there are a lot of dark scenes. At the end, everyone seems happy. Is everyone really happy? Is this a happy ending?
Well, yes we gave you a happy ending. I’m not sure that trouble won’t find Bon Temps again. We called the episode “Thank You.” It was a thank you to all the fans that stuck by us. And, truthfully, for me it was a thank you to Anna, who played a middle who gets a lot of heat a lot of the time. I think she was absolutely brilliant this season. I think she was the center of the show in a way she hasn’t been in a long time. I wanted to give her and our fans a happy ending.

I know our show has made its living on sex and gore and violence, but without story that all takes on the feeling of a snuff film. The director, Scott Winant, put in better words than I could. He said I get what you’re doing here. If you’re going to go bigger and bolder than you’ve ever been, then where are you going to go. And so the more surprising ending here is this intimate, small, beautiful story of these people in a small town. The truth is the finale of the show that I have loved, and I openly admit this is a different show, is “Friday Night Lights.” To me, you want to know that these people are going to be OK. And, a lot of our fans who aren’t journalists, frankly, I think are going to appreciate that we parked these people in a good place.

Editor’s note: This interview was edited for length and content.