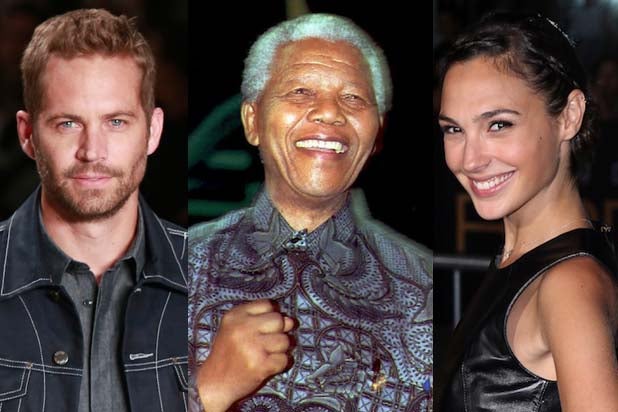 ‘Fast and Furious 7’ Producers Considering Scrapping Production, Starting Over in Wake of Paul Walker’s Death (Exclusive)
With cast, crew, family, friends, and Hollywood mourning the unexpected loss, production on the sequel has shut down, and producers aren’t yet sure how to proceed.

Idris Elba, Morgan Freeman React to Nelson Mandela Death
Two of the actors who have portrayed him most recently joined Oprah Winfrey, Hollywood, President Barack Obama and the rest of the world in remembering one of the most respected humanitarian leaders of all time.

‘X-Men: Apocalypse’ Announced for May 2016
One of the best villains in the Marvel universe is finally getting his chance to destroy the world.

Jerry Bruckheimer Deal at Paramount All But Closed (Exclusive)
And he exclusively told TheWrap all about why he landed there after splitting with Disney, as well newfound “freedom” the deal gives him.

‘Fast & Furious’ Actress Gal Gadot Cast as Wonder Woman in ‘Batman vs. Superman’
The former Miss Israel will join Ben Affleck and Henry Cavill in what may very well be a set up for a giant “Justice League” movie.

Martin Bashir Resigns From MSNBC After Sarah Palin Slam
For once, Sarah Palin is actually thrilled with the “lamestream” media.

If PG-13 Is the Moneymaker, Why Is Hollywood Cranking Out So Many R-Rated Movies?
This year, PG-13-rated films have accounted for 52 percent of the overall box office grosses. R-rated movies only accounted for 27 percent — but it’s not always about the Benjamins.

‘Walking Dead’ Is in ‘Lost’ Mode
Someone died again. The Governor is back. Didn’t we see this exact same plot line last season?

Maria Bello Reveals Lesbian Relationship, Embraces Her Post-Modern Family
“‘love is love.’ And I love our modern family,” Bello wrote in a New York Times essay this week. “Maybe, in the end, a modern family is just a more honest family.”

Jimmy Kimmel Reminds Viewers Just How Sensitive Los Angeles Reports Are to “Cold” Weather (Video)
A slight breeze and temperatures below 50 degrees are on par with a blizzard in Southern California.

Ron Burgundy Is Taking Over the World: 5 Reasons He Might Be Wearing Out His Welcome
His publicity campaign to promote “Anchorman 2: The Legend Continues” is one of the most creative ever imagined — but it’s also one of the longest.

‘Sound of Music Live’ Is a Hit: 10 More Dream Musicals We Want to Hate-Watch on NBC
“Cats” with actual cats, “Dreamgirls” starring the Kardashians, and we’ve even found the perfect musical for Kanye West to take over.

And for week’s craziest moments in pop culture, watch the newest episode of #ICYMI: