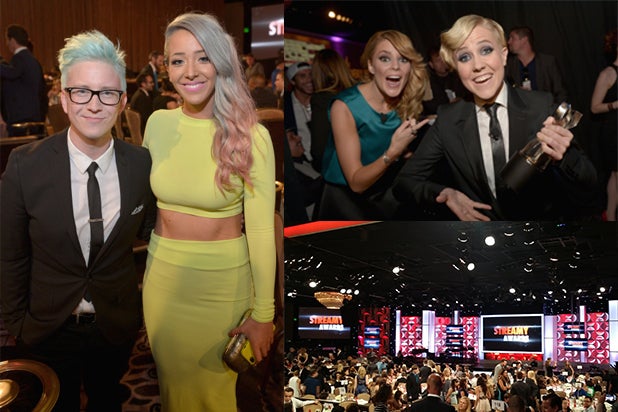 There were “YouTube millionaires” (those with over a million subscribers) and actual digital millionaires inside the Beverly Hilton on Sunday night at the 4th annual Streamy Awards.

“Any YouTuber that touched this microphone tonight is a millionaire. Don’t you ever forget that,” Morenstein said in an on-stage rant. “Maybe (it wasn’t true in 2011), but it’s 2014. So you show them that respect. Lots of money, we’re talking about money here,” Morestein said to cheers.

Harley Morenstein before or after his appearance on stage, and “Dancing with the Stars” star Bethany Mota. (Getty Images)

He continued sarcastically, “Go out there, (and) start a YouTube channel, because there’s a lot of low-hanging fruit. And by low-hanging fruit, I mean millions of dollars. Everyone is rich on YouTube.”

While the screed rings true for those seated up front — fast-becoming household names like Bethany Mota, Michelle Phan, and Maker Studios co-founding talent Shay Carl — the award show trappings of a media industry in boom mode were on display.

There were the big three digital studios – Fullscreen, Maker, and the Collective –  with tables clustered together one level up from the pit. Each cheered loudly when their own stars and promos ran on-screen during interstitials.

Digital studios talent agents weren’t at those tables though. They sat up front with their clients in the talent pit. Endemol Beyond, the TV format giant’s digital division had prime seating as a sponsor (and two Icon Award winners), and CAA had a choice table by the stairs, easy to keep an eye on everyone coming and going to the one bar with two bartenders serving a long line.

“We’re all hyper competitive, but at the same time, we all realize we’re all at the ground floor of a massive transformation in an entire medium,” Ezra Cooperstein, COO of Fullscreen told TheWrap. His company’s talent won six awards and represents Grace Helbig, who hosted.

“While we all want to win individually, we also know that we as an industry have to lock arms and fight the good fight together,” Cooperstein added.

There were no awards for the ALS ice bucket challenge – not even a single mention in the two hour plus show. “These are internet people, they know how fast these things move,” Fullscreen’s Cooperstein told TheWrap after the show.

TV people who have figured out how fast content moves, like viral kings Jimmy Fallon (a winner) and Jerry Seinfeld (also a winner for Best Non-Fiction/Reality for “Comedians in Cars Getting Coffee”) were also AWOL from the ceremony.

One winner, though, was everywhere.

LGBT icon Tyler Oakley was given one of four pre-announced Icon awards, adding it to a mantle that now includes two Teen Choice Awards and a trip to the White House where he spoke with other leading digital talent like Hannah Hart and Vine comedian Alphacat (Iman Crosson) on health care issues with the president.

When accepting the audience’s “Entertainer of the Year” award, he said “This is fan voted, so ya’ll can listen to me talk to the people at home,” before closing the speaking portion of the night.

This guy, who promotes #TeamInternet at his mainstream media appearances, proved the proper segue from the spirit of self-sufficiency and independent success that brought all of the nominees and industry in that room together to the random nostalgia musical act that closed the night: Starship.

Festive as they may be, this does not happen at the Golden Globes.

Speaking of “always playing corporation games,” the night was heavily branded, most specifically with Samsung.

Phones replaced check in lists, phones replaced envelopes and winner cards, and in addition to the hosts addressing it head-on with monologue mentions, a segment on live tweet reactions to the show landed in a giant Samsung phone graphic on screen.

The Beverly Hilton itself took a stake, with hotel branding projected on the walls right next to the name of the event and their social handles included as the password on edible tweet-cheat sheets.

But none of that money went to food.

Coca-Cola (a heavy sponsor at Dick Clark Productions’ American Music Awards as well) dropped a full-sugar aluminum bottle at every seat and just about nothing else. But just like the mainstream awards shows, nobody eats, they drink and meet.

Also read:CBS to Air The Hollywood Film Awards in November

Comic Mamrie Hart (of “You Deserve a Drink”) kept it “on-brand” for herself, bringing her glass of champagne up on stage for a high point of the night.

Her handling of a personal “toast” to Joan Rivers resonated as an authentic and intimate salute from this community amidst the broader outpouring from the entertainment industry as a whole since the comic’s death last week.

Rivers started her “In Bed With Joan” YouTube series at age 79 (65,760 subscriptions) and had shared sheets on-camera with several stars of the night, including: Both hosts Hannah Hart and Grace Helbig as well as winners Brittany Furlan, Jenna Marbles and Oakley.

Sorry Louis C.K., there are 72 other media stars who preceded you in to that bedroom.

“At 81 year old, Joan was ‘collabing’ weekly,” Hart said. “One of Joan’s greatest traits was to make everyone feel super fucking lazy,” Hart reminded the room of self-employed producers, before lifting the room up with a “Here’s to Joan!”

“The audiences are massive and really engaged,” Cooperstein told TheWrap. “If I told you that about a TV show, you’d be talking about Emmys, massive ratings, and instead because it’s on the internet and it is through digital, it still has a second class connotation. There’s a lot more parity with all the screens that we watch content on today.”