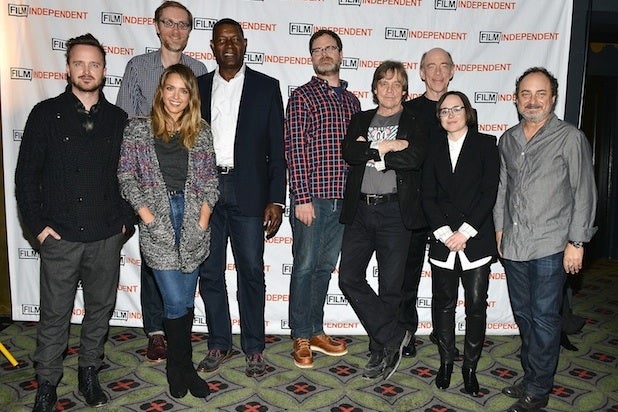 Courtesy of Wireimage and Film Independent

Jason Reitman unveiled a surprise at his live reading of “The Empire Strikes Back” on Thursday night, and the crowd that packed the Ace Theater in downtown Los Angeles couldn’t have been more excited if he’d shown footage from the new “Star Wars” movie that’s due to open a year from now.

Reitman’s surprise, though, looked back rather than forward. After he’d introduced the cast that would be doing one of the celebrated live reads that Reitman regularly stages for Film Independent — a cast that included Aaron Paul as Luke Skywalker, J.K. Simmons as Darth Vader, Jessica Alba as Princess Leia and, in a bit of gender-bending, Ellen Page as Han Solo — Reitman frowned and said the cast didn’t feel complete.

With that, the audience screamed and leapt to its feet as the original Luke Skywalker walked onstage and hugged the new cast, beginning with Paul.

And when Hamill turned out to do pretty spectacular impressions of both Guinness’ Obi-Wan and Revill’s Emperor, the capacity crowd hit a level of galactic ecstasy that wouldn’t even have been ruined by a surprise appearance by Jar-Jar Binks.

From the start, this live read had promised to be crazier than most, taking the most revered part of a series that has been thrilling fanboys (and fangirls) for decades, even though you could argue that it’s been all downhill for George Lucas’ franchise since the 1980 release of “Empire” – or, as Film Independent programming chief Elvis Mitchell called it in his introduction, “the greatest ‘Star Wars’ movie ever made.”

“Welcome to the first live screening of ‘The Interview,’” said Reitman when he took the stage on Thursday, but from there the evening left the present and headed for a galaxy far, far away.

It was already clear that the crowd contained fewer people who’d been to live reads before and were there for what is always a highly entertaining experience, more who were drawn specifically by “Empire.” And Reitman played that up by giving J.K. Simmons a far more elaborate entrance than usual: Instead of walking in from the wings, the actor marched down the aisle, flanked by four fully-costumed Storm Troopers and an imposing figure in a Vader costume.

That entrance was impressive for about two minutes, until Hamill arrived to upstage everybody.

As for the performance itself, there’s a reason why Reitman and Mitchell typically choose talkier films with fewer explosions and no lightsaber battles.

Also read: Jason Reitman to Direct Heist Thriller ‘I Would Only Rob Banks for My Family’

But it was also fun to go down that road for a change, particularly in front of an audience of “Star Wars” fanatics, already revved up because of next year’s release of a new installment, who wanted to hear and applaud familiar lines like “I am your father,” and “I love you”/”I know,” and “I’m not afraid”/”You will be.”

They got them all, along with other lines that aren’t in the movie, because Reitman used a hybrid of the original script and the shooting script. And they got some choice stage direction: When Reitman read the original description of a “long, deep” kiss between Han and Leia, he muttered, “Oh, George.”

It was clear in this setting that while Luke may be the hero, he doesn’t have the best lines; Paul was often a straight man to an array of sidekicks who stole the show, and to some degree so were the relatively subdued Page and Alba as Luke and Leia.

Foremost among the show-stealers were live-read vet Kevin Pollak, who delivered a spot-on Yoda and a number of assorted supporting players; Stephen Merchant, delightfully addled as C-3PO; Wilson, whose Chewbacca moans and roars brought the house down, and who also quite ably supplied with sound of some lightsaber battles; and even Reitman himself, who made his debut as a performer with some virtuoso whistling of R2-D2’s beeps.

Dennis Haysbert, meanwhile, was suitably smooth and oily as Lando Calrissian. And, of course, Simmons, who’s appeared in every one of Reitman’s movies but never as an evil Sith lord, had plenty of moments as Darth Vader. He lowered his voice, conveyed implacable evil and was almost as scary as the music teacher he plays in “Whiplash.”

The crowd hadn’t come to hear a significantly new twist on an old favorite, the way Reitman had delivered in the past with his all-black take on “Reservoir Dogs,” or his all-female “Glengarry Glen Ross,” or last month his version of “Diner” performed by the cast of “The League.”

They wanted “Empire.” They got “Empire.”

More than that, they got this guy named Mark Hamill doing “Empire.”