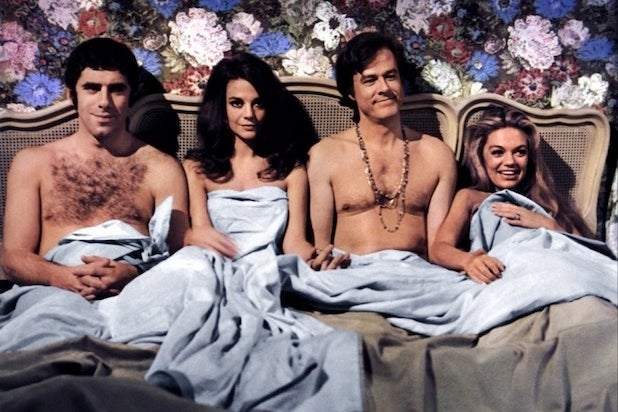 Paul Mazursky, who died Monday at the age of 84, began his career as an actor in Stanley Kubrick‘s first movie, 1953’s “Fear and Desire.” But he is far better known as the writer and director of a string of movies that became hits and resonated in the cultural lexicon in the ’60s, ’70s and ’80s.

In January 2011, just before Mazursky received an honorary award from the Los Angeles Film Critics Association, he sat down with TheWrap for a freewheeling conversation that ranged across his entire filmography.

Here’s Mazursky’s own guide to a few of his more notable films:

“I was very lucky to get ‘Bob & Carol’ made. The first guy that I showed it to was running a place called National General, which had just begun. And he read it and said, ‘It’s too dirty. I said, ‘What if I get Joanne Woodward and Paul Newman to be one of the two couples?’ ‘Then it would be clean,’ he said.

“Freddie Fields took it to Mike Frankovich, who had a four-picture deal with Columbia. He read it and said, ‘I want to do it. Who should direct?’ I said, ‘If I don’t direct it, I’m not selling it.’

“It was a five-minute laugh in Denver. Not in New York, not in L.A. Denver. I knew then it was going to be a big hit.”

“Blume in Love”
1973
George Segal plays a divorce lawyer trying to win back Susan Anspach, who divorced him after he cheated on her.

John Calley, a great executive, read ‘Blume in Love’ in my agent’s office, called right away, that day, and said, ‘Let’s do it.’ They don’t do that now. Now it’s like squeezing blood. You gotta get money from Europe, Ethopia, Canal Plus … Nobody’s sure about distribution, everybody’s saying, ‘Who’s the actor going to be?’ You’re dealing with CAA, they want too much money. Badda boom badda bum badda boom.”

“Harry and Tonto”
1974
The road movie stars Art Carney as a widower who travels across the country with his cat. Again, Mazursky was Oscar-nominated.

“I had good luck in finding a few executives. Alan Ladd Jr., who was a friend of mine, gave me the green light for ‘Harry and Tonto.’ An old man and a cat. 980,000 bucks, traveling across America, no movie star, and Art Carney won the Oscar. They were shocked.”

“One of my favorites: Jewish boy in Brooklyn, lower middle class family, leaves Brooklyn, goes to Greenwich Village, the beat generation, ends up in Hollywood. Who would make that movie today? Laddie gave it the green light.”

“An Unmarried Woman”
1978
Jill Clayburgh plays a housewife trying to get her life back on track after her husband leaves her for a younger woman. Nominated for Best Picture, Best Original Screenplay and Best Actress.

“It was turned down nine times. Every studio turned it down. Morons, even then. Laddie had paid for the script, but passed on it because they had so many women’s movies they were scared. They had the Altman movie, ‘3 Women,’ they had ‘Julia,’ they said, ‘We don’t want to do another women’s thing.’ I said, ‘Of all the movie’s I’ve ever written, except for “Bob & Carol,” this is the most commercial. This can’t miss.’ They didn’t believe me.

“But then ‘The Omen’ opened and made money, so Laddie said, ‘We got the money from “The Omen.” If you can make it for two million bucks, make it.’ It cost 2.2. I cast a relatively unknown woman, Jill Clayburgh, and she almost won the Oscar. It’s a pretty good movie.

“The day it opened in New York, they took me in a limo to see the line at the theater where it opened. The first show, if there’s a big line you’re in, if there isn’t your in the toilet. So were drivng up, and I see no line. And I say to Marion Billings, the publicist, ‘I’m gonna slink down, let’s get out of here, I don’t want anybody to see me, it’s a bomb, it’s a turkey.’ As we make a turn to go around the building, Marion says, ‘If I were you I’d sit up.’ As I sit up I see a massive line that began around the corner all the way around the building.”

“Moscow on the Hudson”
1984
Robin Williams plays a Russian circus musician who defects on a visit to the United States, and takes up with a community of immigrants.

“Frank Price gave me the go-ahead on ‘Moscow on the Hudson.’ The first 20 minutes is in Russian, and he was worried. He said, ’82 percent of the audience can’t read. How are they gonna read subtitles?’ So I started the movie in English, with Robin Williams on a bus in New York, and then did a flashback, so he spoke English at the beginning.”

“Down and Out in Beverly Hills”
1986
Richard Dreyfuss and Bette Mider play a married couple who save the life of a suicidal homeless man played by Nick Nolte.

“It was based loosely on Jean Renoir’s movie ‘Boudu Saved From Drowning,’ but I made it about now. And Nick was a brilliant as the bum. I mean, he was a real bum.”

“Scenes From a Mall”
1991
Woody Allen and Bette Midler star as a married couple whose problems surface on a shopping excursion.

“It was the biggest budget I ever had, because it was Woody Allen and Bette Midler, and I had to shoot it in New York because Woody wouldn’t work in LA. And the studio really wanted Woody and Bette. By the time their salaries came in and my salary came in – because if they’re gonna get a lot of money, I’m gonna get a lot of money – that was about 10 million bucks for the three of us.

“So it ended up costing about 20 million. It shouldn’t have. Everybody should have worked cheaper.”