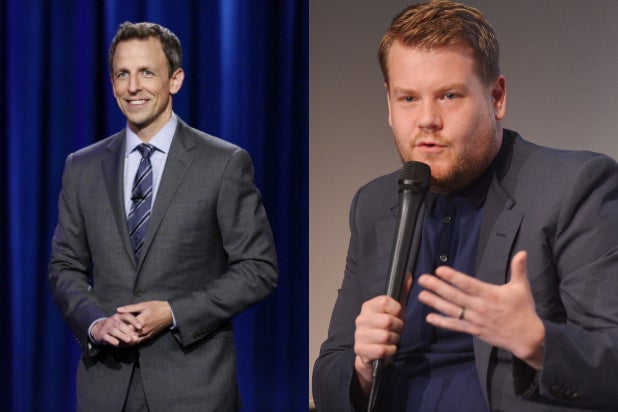 Since taking over from Jimmy Fallon in February, the former “Saturday Night Live” head writer has been regularly beating his competition on ABC and CBS, which will actually see a transition from Craig Ferguson to James Corden in 2015, as TheWrap first reported.

Meyers actually knows his upcoming competition “fairly well” — the two both have shows on Hulu: “The Awesomes” for Meyers and “The Wrong Mans” for Corden.

“He’s such a wildly talented person, so I’m really happy for him,” he added. “I think he’ll do a great job.”

Meyers also said he’s enjoying the transition from “SNL” to “Late Night,” and feels like it’s going well at the half-year mark.

“I think we always want to keep getting better and we feel like we show improvement with each month,” he said. “I can say that all the things that I worried I was going to critique about the schedule turned out to be a little bit better than I thought they would be.”

Aside from a less grueling schedule in comparison to the one he kept at “SNL,” Meyers is enjoying being able to perform every day: a “luxury,” he called it.

Plus, there’s less pressure on a night-to-night basis.

“It’s been nice to have a show where you can be a little bit less precious about the material because of the fact that you get to keep doing it,” Meyers added. “And you know, again at ‘SNL,’ because of who the host is on any given week, it always felt like a once-in-a-lifetime opportunity.”

Some of the material that was precious to Meyers at “SNL” has stayed near and dear to his heart throughout the years, and has seen a second life at the former “Update” anchor’s new job. The late-night talk show’s “Second Chance Theatre” breathes new life into a sketch — one that’s usually ridiculous — that was cut from his time at “SNL.”

The segment has quickly become a viewer favorite. And there’s more to come, Meyers tells us: a new “Second Chance Theatre” is scheduled two weeks after the Emmys.

The 66th Emmy Awards air Aug. 25 on NBC. Stay tuned for the rest of TheWrap’s Emmy preview interview with Meyers.