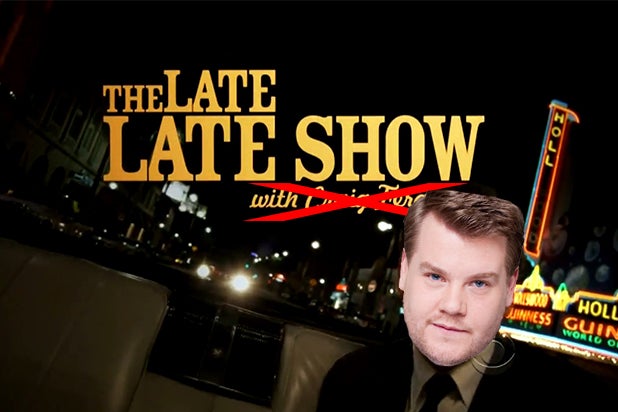 CBS’ selection of James Corden reflects the new realities of late night, in which a viral video in the morning may be worth as much as strong ratings. Jimmy Fallon and Jimmy Kimmel are competing for a young, online audience not with the old tricks of the trade — monologues, interviews, skits — but with goofy segments that are ready-made for viral consumption.

Corden is far from a household name in the US, which makes his 4.35 million Twitter followers all the more impressive. Many of them may be overseas fans of his British hits like “Gavin and Stacey” and “The Wrong Mans” and won’t be much help to him where U.S. ratings are concerned. But the numbers indicate Corden knows how to play online.

David Letterman invented the art of non sequitur amusements like “Stupid Human Tricks.” But Fallon and Kimmel fully realized how well such quick hits could lend themselves to social media. So now instead of hearing about what a celebrity said in an interview last night, we wake up to clips of beer pong, gymnastics and word-association games.

TheWrap reported exclusively Tuesday that CBS had chosen Corden as Ferguson’s replacement. We can’t ask the network why Corden is the right host, since CBS has declined to confirm the job is his. But it’s a good bet the oldest-skewing network believes Corden is at home in the Twitter- and Facebook-driven world.

At 35, Corden is 17 years younger than the man he’s replacing. More important, he has more than twice as many Twitter followers as Ferguson. Twitter followers aren’t the only measure of online engagement, but they are one of the most obvious. And as old-school measurements like overnight ratings become less and less important, online engagement will become more essential.

Besides using Internet hits to drive real-time TV viewers to their shows, Fallon and Kimmel’s social media presence makes their shows feel interactive — and their viewers feel more invested. They can then leverage that sense of familiarity for advertising campaigns like the one Kimmel did last year for Tostitos.

Even if Corden doesn’t rocket past ABC’s “Nightline” and NBC’s “Late Night With Seth Meyers,” CBS doesn’t have much to lose. Ferguson is already in third place in the 12:35 a.m. slot, which is one reason why CBS is willing to let him go when his boss, David Letterman, leaves late night. Ferguson’s “Late Late Show,” which has been on the air nearly a decade, is produced by Letterman’s Worldwide Pants Productions.

If Corden can increase Ferguson’s audience — or even just draw a younger crowd — that will be a plus for CBS. But the real bonus will be if Corden can draw an online audience the way Fallon and Kimmel have. Meyers is very much of the Fallon-Kimmel school. So is Conan O’Brien, whose fans rallied to him online as Jay Leno took back the “Tonight Show” from him in 2010.

Stephen Colbert, Letterman’s replacement, is a master of the kind of surprises that create trending topics. On Monday, he shot an episode 1974-style to mark the 40th anniversary of President Nixon’s resignation. On Tuesday, Hillary Clinton made an unexpected appearance. Colbert boasts 6.76 million followers on Twitters.

CBS may also have one other big hope for Corden: that he’ll be more famous with American audiences by the time he’s on the air than he is right now. He stars in “Into the Woods,” a big-budget Disney musical coming to theaters Christmas Day.