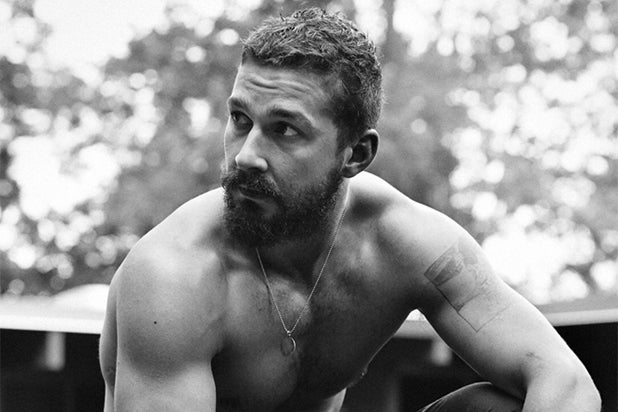 When Shia LaBeouf‘s not wearing a bag over his head on red carpets or pulling off other such stunts, the “Fury” actor knows a thing or two about speaking honestly to his fans.

LaBeouf spoke candidly about a variety of subjects ranging from his estranged father and his new-found religion, to a very public feud with his “Orphans” co-star Alec Baldwin.

Here are the five greatest takeaways from the “Fury” star’s candid conversation in the November issue of Interview Magazine:

1. The “Orphans” incident affected him big time, but he’s since put it all behind him and made up with the show’s creative team
LaBeouf was famously replaced by Ben Foster in the Broadway revival of “Orphans” back in Feb. 2013, and it’s a topic he hasn’t revisited in any significant detail since the incident played out. “That’s a heartbreak I still have not been able to recover from,” LaBeouf said. “I have since made amends with Baldwin, [‘Orphans’ director Daniel] Sullivan, and [Tom] Sturridge, and Ben Foster, who I never had a problem with — I love that motherfucker.”

2. Nevertheless, LaBeouf insists he and Baldwin are now in a much better place
“Baldwin and I butted heads hard,” he explained. “I came in method. I was sleeping in the park. I’d wake up, walk to rehearsal. I was so scared to do the play that I had memorized it before ever coming to rehearsal. And my whole goal was to intimidate the fuck out of Baldwin. That was the role. That was my job as an actor. And it wasn’t going to be fake.”

“I’ve made peace with Baldwin,” LaBeouf continued. “He was the first dude to hit me up after I got out of court. He sent me an e-mail. It’s really beautiful. I was crying on an airplane. And I hadn’t talked to him since I got fired. I stayed in New York for a month. I was following him home. I was completely broken, and still in [character]. I didn’t know what to do.”

“I needed to have closure. I saw the first show, watched from the front row. And after the show, I got up and clapped for him. And I’m crying, they’re crying… He came up to me and shook my hand from the stage, man. And that’s all I needed.”

3. The 28-year-old actor “found God” while working with Brad Pitt and Logan Lerman on “Fury”
David Ayer‘s World War II tank drama “Fury” opened to 76 percent favorable rating on Rotten Tomatoes and brought in $23.5 million at the box office, but LaBeouf — who starred alongside Pitt and Lerman — got something much more valuable from the experience.

“I found God doing ‘Fury,'” LaBeouf said. “I became a Christian man, and not in a fucking bullshit way — in a very real way. I could have just said the prayers that were on the page. But it was a real thing that really saved me. And you can’t identify unless you’re really going through it. It’s a full-blown exchange of heart, a surrender of control.”

4. His relationship with his father remains tumultuous, but it’s still useful to him as an actor
“The only thing my father gave me that was of any value to me is pain,” LaBeouf told the mag. “The only time my dad will ever talk to me is when I need him at work. He knows to pick up the Skype phone call, and he knows what I’m looking for… My dad is the key to most of my base emotions. My greatest and my worst memories are with my father, all my major trauma and major celebration came from him. It’s a negative gift. And I’m not ready to let go of it, because anger has a lot of power.”

5. Gary Oldman‘s insane Playboy interview didn’t turn him off
“Rise of the Planet of the Apes” star Gary Oldman made waves when he spoke of Nancy Pelosi and a Jewish-run Hollywood in May, but LaBeouf says he’s still a super-fan.

“Gary Oldman, Sean Penn, Joaquin Phoenix — guys who dealt with material that had more intrinsic value,” LaBeouf said when asked which actors he admired the most. “This can be a very debilitating job for an actor. Sometimes you don’t have any say about your creative process. And when I watched the movies of the guys I admired, it felt like they had put a spin on it.”

After a past six months filled with bizarre behavior and run-ins with the law, it sounds like LaBeouf is finally back on track.