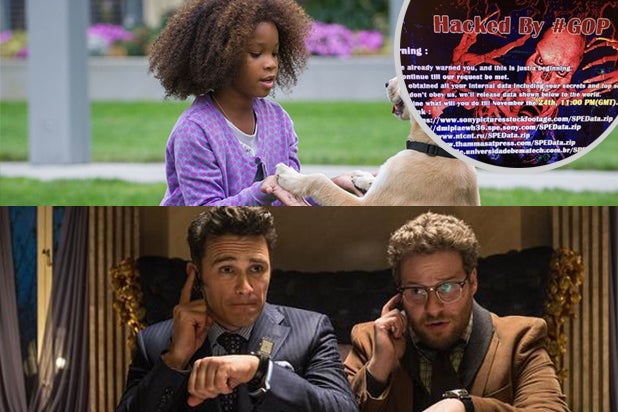 It’s not easy keeping up with developments in the unprecedented and frankly bizarre Sony Pictures Entertainment cyber attack case so TheWrap has pulled it together for you.

On Monday the group behind the attack sent an online message demanding that Sony’s movie “The Interview” be pulled from its planned theatrical release, and by the end of the day the email boxes of studio co-chairman Amy Pascal and Sony Television chief Steve Mosko were leaked. FBI officials said they would be visiting the Sony lot to brief employees on Wednesday and documents revealed that top Sony execs were sent warning emails prior to the shutdown. Twenty-four hours earlier, North Korea spoke out on the hacking for the first time, and investigators traced uploads of data stolen in the attack to a Thailand hotel.

That’s a lot to keep track of. There have been numerous other developments since the attack on Nov. 24, and more will surely follow. Here’s a quick rundown of what we know and what we don’t as of now.

Are operations back to normal at Sony?
We know that most computer, email and phone systems at the studio are operating again, and that basic business functions like home entertainment shipments and film distribution tracking are back online, at least for the most part. But we also know that for Sony employees, up to 47,000 of whom may have had personal information stolen and been threatened along with their families by the purported hackers, things won’t be “normal” anytime soon. FBI officials will visit Sony Wednesday to brief employees on cyber security, and on Friday an “all hands” meeting is scheduled on the lot. That’s not normal. They aren’t normal at rival studios either, where cybersecurity has been heightened and some have hired extra tech defense.

We don’t know just how compromised the systems were or whether long-term or delayed effects were built into the malware that caused the shutdown, or whether it has the capacity to spread. Wary of compromising the investigation, Sony officials, the FBI and private security working on the case have done all they can to squelch specific details of the damaged operations during the investigation and been just as silent as they’ve been restored, too.

Who is behind the attack?
A group called Guardians of Peace claimed responsibility for the attack when it occurred, and Monday a message purporting to be from them was posted online that taunted Sony and the FBI and demanded that the upcoming Sony movie “The Interview” be pulled. That same message denied involvement in a threatening note sent to Sony employees last week, underscoring the difficulty in determining who is really speaking when all the communication is anonymous.

The probe has stretched all the way to Thailand and investigators have reportedly traced uploads of some of the stolen data to a five-star hotel in Bangkok on Dec. 2. The malware utilized in the Sony shutdown is comparable to that used in previous cyber attacked attributed to North Korea, they say.

What we don’t know is who makes up Guardians of Peace, and to what extent if any they are tied to North Korea. In its first public statement on the hacking Sunday, the North Korean government denied involvement but called it “a righteous deed,” and said its sympathizers and supporters may have been behind it.

Is the Seth Rogen-James Franco movie “The Interview” really the motivation for the hacking?
The Guardians of Peace group has made vague references to “equality” as a goal in a message to a blog, but “The Interview” has emerged as the most likely trigger for the attacks. In the film comedy, the actors play journalists granted an interview with North Korean leader Kim Jong-Un and are then asked by the U.S. government to assassinate him. When the movie’s plot was unveiled last summer, North Korea immediately demanded that the film be banned and threatened a “merciless and resolute” response. Later a Korean official personally told the U.N. Secretary General that the film parody was “an act of war.”

What we don’t know is why this has struck such a nerve with officials in Pyongyang. A movie about assassinating a nation’s leader has potential to offend, but anyone familiar with the previous work of Rogen and Franco would be inclined not to take them too seriously. The North Koreans were unhappy with the 2002 James Bond movie “Die Another Day,” which featured Korean prison camps and rogue generals, and weren’t keen on the 2004 comedy “Team America: World Police,” which skewed a puppet character of Kim Jong-Il. But why this film may have provoked such a devastating attack is hard to figure. Growing concerns over terrorism and N. Korea’s continuing isolation from most of the world community may have colored their perception and driven the response.

What does Sony stand to lose as a result of the attack?
The financial toll will become clear when Sony issues its earnings reports down the road. That was the case in 2013, when the Sony Playstation Network was compromised for 24 days, and the entertainment giant revealed the hack attack has cost it $170 million. Besides the obvious loss of productivity and revenue, there are legal costs, as well as outlays for restoring the systems, tracking the hackers, upgrading security and possibly reparations to employees and others whose private information has been compromised.

What we don’t know is the impact on Sony’s image and its relationships with individuals and companies it does business with, not to mention its shareholders. “Whether it’s fair or not, it sends the signal that Sony leadership is not in control of their operations and, in addition to whatever toll taken on production, that they’re being diverted from finding solutions to what’s going on with the company,” entertainment valuation expert Seth Willenson told TheWrap. Sony is in the midst of a major cost-cutting campaign that has included layoffs and executive exits, after intense pressure from activist, so the timing could hardly be worse. The leaking of personal information on actors creatives including Sly Stallone, Judd Apatow and Cameron Diaz may have a chilling effect on the studio’s dealing with others as well.

What effect will the pirated copies of Sony’s movies have on the box office?
We know that days after the attack, copies of five Sony movies showed up on pirated movie sharing sites. They included high profile films like the already released Brad Pitt war movie “Fury” and the upcoming musical “Annie,” which will open on Dec. 19. Also leaked were three smaller films, director Mike Leigh’s “Mr. Turner,” set for a Dec. 19 release as well, along with the drama “Still Alice” (Jan. 16), which stars Julianne Moore, Kristen Stewart and Alec Baldwin, and “To Write Love on Her Arms,” an undated drama based on Renee Yohe’s battle with drugs and founding of a charity group.

Watch video: The Sun Will Come Out Tomorrow in New 'Annie' Trailer (Video)

What we don’t know is what impact the leaks will have on the films’ box office and ancillary sales. The pirated “Fury” has been downloaded 1.2 million times, but was for the most part played out theatrically when the leaks occurred, so any damage there will be to home entertainment. “Annie,” which stars Jamie Foxx, Cameron Diaz and Quvenzhane Wallis in the title role, has been downloaded more than 200,000 times. It’s tracking for an opening in $15 million range, relatively soft but not shocking given the crowded Christmas season release schedule. We also don’t know what effect this will all have on “The Interview.” It’s certain that the hacking has raised the public’s consciousness, and it’s conceivable the film parody could get a box-office boost when it opens on Christmas Day.