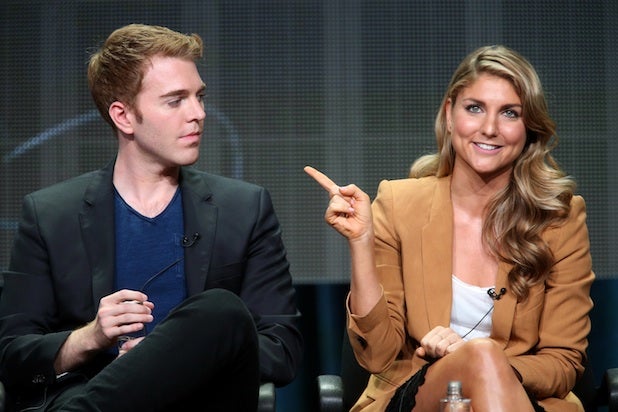 Starz competition “The Chair” would seem like a lucky leap for contenders Shane Dawson and Anna Martemucci over the challenges aspiring filmmakers must deal with before getting a film financed. But as the process was shot and televised, the two had to deal with an incredible amount of public scrutiny.

Dawson was named “The Chair’s” winner during Saturday’s finale episode. But, things had become especially contentious as the show’s fans clashed on social media and the show’s executive producers Zachary Quinto and Neal Dodson publicly shared their dislike of Dawson’s movie “Not Cool,” on the show and in a guest blog on TheWrap, respectively.

Earlier this week as Dawson was waiting for word of who won the competition, the YouTube star was feeling a great deal of anxiety.

“I was just sitting in my apartment, waiting for the email, with constant diarrhea, I was sitting on the toilet,” Dawson, who sounded more like his over-sharing YouTube personality than the pensive artist we met on “The Chair” this season, told TheWrap.

“I think I was scared, because for me the competition wasn’t about winning,” he clarified. “I mean, we got to make our own movies, which is insane. But, just because the last two weeks of me being dragged through the mud by Neal, by all of these people and all the actors on ‘Hollidaysburg’ were tweeting against the movie and tweeting out Neal’s article, I felt so beaten down. So, the moment that I won was like, ‘Oh, OK, so I’m not crazy.’ This movie connected with people. Maybe, it didn’t connect with these people but there’s thousands of people who it did. It was a huge relief and I’m incredibly grateful and excited about it.”

Created by Chris Moore (“American Pie,” “Good Will Hunting”), “The Chair” gave the two filmmakers the opportunity to make a movie based on the same script with an $850,000 budget, final cut decision and a $250,000 prize for the winner based on votes.

Before joining “The Chair,” Dawson was already “internet famous,” as he calls it, for his parodies and sketches on his YouTube channel, which has more than six million subscribers.

TheWrap: I got the feeling that Team ‘Hollidaysburg’ felt they had to even the odds of your millions of built-in votes…
Shane Dawson: Which is not true. The voting numbers, I don’t know if they’re being released but I’m sure willing to talk about it. They ended up throwing away any votes if people got any questions wrong, so that gets rid of a lot of people. They got rid of all the votes where people did all ‘100’ on me and ‘0’ on her. It literally left about 5,000 votes, which is nothing. So for me, they had a big chance to win… If the goal was to find what an audience likes more I think I succeeded at that.

On the flip side, you had Chris Moore, Josh Shader and Corey Moosa’s support through the process. What did that mean to you?
We all had the same goal of making a movie that was going to please an audience and have a shelf life, be really re-watchable. They trusted me and that’s what I really wanted. With Zach and Neal, they weren’t around, they didn’t return my emails, they weren’t present.

When Corey came along, he added an extra flavor to the project. He was amazing and became even more amazing as the releasing portion of the process, because that’s when Zach and Neal, the ‘Hollidaysburg’ team, started attacking me. I really didn’t have anyone to call and rely on and lift me up when I was down. I wasn’t going to say anything rude about the other team, so it was nice to be comforted by people who believed in me and didn’t agree with Zach and Neal. It was good to know I wasn’t alone.

On the show, your team felt that you weren’t very open to criticism. Could you have been more open?
I was so incredibly open. I don’t quite understand why that became a storyline. But I get it, it’s a reality show. I worked directly with the writer. I didn’t just leave and rewrite it myself. I took every opinion, every piece of advice. When we did casting, I had every producer in there with me when we were auditioning and I had every producer’s opinion. I had every producer on-set with me and giving me their ideas. I had the writer on-set with me, which is unheard of to have the writer sitting next to the director and taking his advice.

See video: Watch Two Filmmakers Battle It Out in Starz’s ‘The Chair’

When it came to the test screening, I actually haven’t watched the episode, so I don’t know what’s made it in. The reason why I didn’t sit in the test screening was that I was starring in the movie. If I were to hear a bunch of people say, ‘Oh Shane’s a shitty actor,’ I think that would have affected me a little too much in the editing process and I think I would have gone back and cut my entire character out or done something drastic. For me, I didn’t want to be in that room but I wanted to get a consensus and that happened. I ended up cutting 15 minutes of the movie out and I took all those notes and I think I took the movie from pretty good to great. I don’t know if that made the show or not, but that’s what happened.

There’s a sweet scene in which you and Anna meet each other for the first time at the Television Critics Association press tour. Can you still be friends?
I think it’s sad, and I’ve said this to her multiple times, we’re the only people who have gone through this and I wish her team would’ve been more open to being more kind to me. If you check their Twitters, they’ve been pretty mean. And Anna hasn’t been as mean. She’s tried to stay semi-nice. I think competition turns people into what they normally wouldn’t be. I think I’m used to competition. YouTube is a daily competition. I’m used to that and I’m used to hate coming from everywhere on the internet. I have kind of a thick skin. I think they weren’t ready for it and it really affected them. Listen, I think down the line we’ll all end up hanging out at some point, but it got pretty ugly. I still wish them nothing but the best. I’m happy she made the movie she wanted to make. I’m happy I made the movie, so onward and upward.

What’s the biggest lesson you learned from the process?
This isn’t even directly related, but I think a few years ago I would’ve fought back. If anyone attacked me on Twitter, I’d make a video about it. I would’ve ranted about it and showed them a piece of my mind. I think this experience really taught me how to take the criticism with a grain of salt and not fight back and not get angry and not take it personally and just kind of observe it rather than engage in all the negativity. I mean, the critics’ reviews were so personal and hateful and most of them weren’t about the movie, they were about me. Then, I had to deal with Neal’s bullshit and I had to deal with all the ‘Hollidaysburg’ people’s bullshit. For me, actually learning to step out and not engage in it was huge. I feel so much better and it’s so great that I didn’t hate or attack anybody and I feel proud of myself that I didn’t.

Note: A Starz representative told TheWrap that Dawson’s account of the number of votes is just his speculation and not accurate. They are not releasing the actual vote numbers.