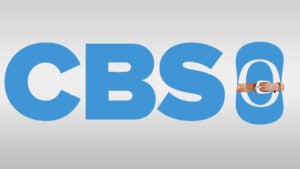 In the wake of Bob Chapek’s exit and Bob Iger’s shocking return as Disney’s CEO, the studio must push forward on the release of its latest Thanksgiving animated release, “Strange World,” which is using a shorter theatrical window proudly touted by the company’s ousted chief but is facing terrible box office projections

Last Thanksgiving, Disney released the animated musical “Encanto” with a 30-day theatrical window in the wake of a rising COVID-19 surge. The results were a $40.5 million five-day opening and a $96 million domestic total, a decent result given pandemic challenges but poor by Disney animation standards. But current projections say “Strange World” will top out at just $30 million in its first five days.

With its $135 million budget, “Strange World” is shaping up to be an even bigger theatrical flop than “The Good Dinosaur,” the November 2015 Pixar film once seen as the biggest bust for that studio with “just” a $123 million domestic and $332 million global total. Released on Thanksgiving in between Lionsgate’s “The Hunger Games: Mockingjay” and Disney’s record-breaker “Star Wars: The Force Awakens,” “The Good Dinosaur” found itself squeezed out in the race for moviegoers’ attention, with so-so reviews not helping.

Like “Encanto,” “Strange World” will get a 30-day theatrical window before hitting Disney+ in time for Christmas. In an earnings call earlier this year, Chapek boasted that the popularity of “Encanto” among Disney fans despite the lackluster theatrical run was proof that Disney+ could turn the company’s newest films and characters into pop culture touchstones. “Encanto” became the fastest title ever to hit 200 million viewing hours on the streaming service — until Pixar’s “Turning Red” broke that record as a streaming-exclusive title less than three months later. 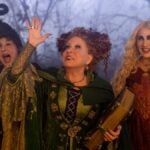 “We do not subscribe to the belief that theatrical is the only way to build a Disney franchise,” Chapek told investors in February.

Granted, there are some major differences between “Strange World” and “Encanto” that make it a trickier film to market. The film’s marketing touts the film’s human protagonists, the boisterous adventurer Jaeger Clade (voiced by Dennis Quaid), his intellectual son Searcher (Jake Gyllenhaal) and his teenage grandson Ethan (Jaboukie Young-White), along with the faceless blue amoebalike comic relief known as Splat.

None of these characters are as marketable as the photogenic heroines like Moana, Mirabel from “Encanto” or Anna and Elsa from “Frozen.” Nor does “Strange World” have a catchy song like “We Don’t Talk About Bruno” to build popularity. Even among nonmusical Disney films, the Clades don’t catch the eye as much as characters like the video game “bad guy” Wreck-It Ralph or the fluffy animals of “Zootopia.”

In addition, the reviews for “Strange World,” while generally positive, aren’t as strong as most of Disney’s recent output: The Rotten Tomatoes score of 73% is well below the 91% for “Encanto” and 94% for “Raya and the Last Dragon.” While that might not dissuade parents just looking for a good animated film for their kids, general audiences looking for a movie to see may choose “Black Panther: Wakanda Forever” instead. 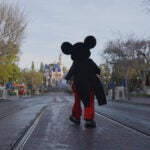 But all these factors just prove that like Pixar’s summer bomb “Lightyear,” Disney is having trouble doing what it once did with ease: Turn animated fare, either original or sequel, into can’t-miss theatrical hits. Because of this year’s mix and Chapek’s strategy to make streaming Disney’s top priority, family audiences have failed to show up in the way they did before the pandemic.

“Strange World” is also getting squeezed by two other Disney releases: “Black Panther: Wakanda Forever,” which opened two weeks ago, and “Avatar: The Way of Water,” which debuts on Dec. 16. (In fact, the studio has made its biggest marketing push this week for the “Avatar” sequel with a final trailer released during ESPN’s “Monday Night Football” broadcast.) Universal’s animated franchise sequel “Puss in Boots: The Last Wish” will also crowd it out of theaters next month.

Perhaps it is harder in this post-shutdown theatrical market to sell original animated films in theaters, but as Bob Iger resumes his post as Disney CEO, theaters will be looking to him and the studio to find a successful strategy for new IP. While other studios are loading up on franchise animated titles in 2023 like Sony’s “Spider-Man: Across the Spider-Verse” and Universal/Illumination’s “The Super Mario Bros. Movie,” Disney’s offerings will be the original Pixar summer release “Elemental” and the studio’s 100th anniversary film “Wish,” an original new musical starring Ariana DeBose, set for release next Thanksgiving. 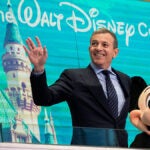