Sylvester Stallone is voicing his displeasure, again, at the development of a spinoff of “Rocky” character Drago, this time demanding that producer Irwin Winkler and his partners return the rights to the characters.

“After IRWIN WINKLER and FAMILY SUCK ROCKY DRY!” Stallone’s Instagram post begins, accompanying a photo of Winkler edited to look like Dracula sucking Rocky’s blood. “Presumed to be the most hated, untalented, decrepited (sic) producer in Hollywood and his cowardly children have found their next meal… Drago. RETURN MY RIGHTS BLOODSUCKERS! Throughout history so many artists in every industry, recording, painting, writing you name it have been destroyed by these blood suckers who have destroyed so many families, lining their pockets with other people!”

The post ends with Stallone turning his attention to Dolph Lundgren, who played Russian fighter Ivan Drago in 1985’s “Rocky IV” and is planned to be at the center of the story of this new film. 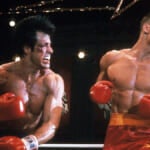 TheWrap exclusively reported Friday that screenwriter Robert Lawton is set to write the “Rocky” spinoff “Drago” for MGM, after Drago’s son Viktor (Florian Munteanu) filled the antagonist role in 2018’s “Creed 2.” Stallone first voiced his anger about the project on Saturday night, saying he never wanted the franchise “to be exploited for this greed.”

Before news of “Drago” broke, Stallone took to Instagram to ask Winkler to return at least part of the “Rocky” rights to him.

“After Irwin controlling ‘Rocky’ for over 47 years, and now ‘Creed’,” Stallone wrote, “I really would like to have at least a little [of] WHAT’S LEFT of my rights back, before passing it on to ONLY YOUR CHILDREN — I believe that would be a fair gesture from this 93-year-old gentleman?”

Stallone wrote and starred in 1976’s “Rocky,” with Winkler – the film’s producer – filling a key role as he helped convince United Artists to make the project with a screenplay by the film’s relatively untested star. Despite creating the franchise, Stallone has no ownership of the series.

There have been eight films in the “Rocky” franchise thus far, with another on the way in the form of “Creed 3,” in which Michael B. Jordan is starring and directing.