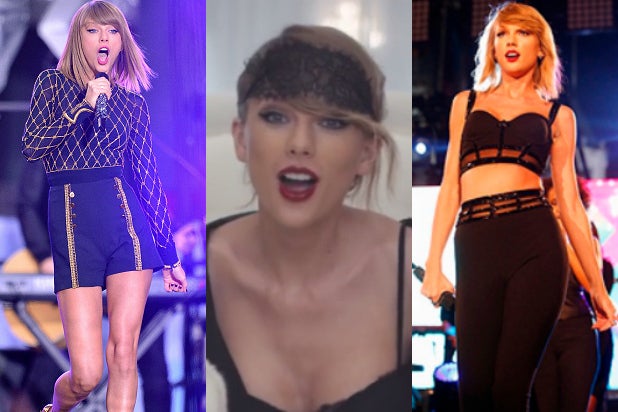 If Taylor Swift‘s music can’t move mountains, it sure can move albums.

The country-turned-pop (and occasionally now, hip-hop) artist sold a stunning 1.2 million-plus albums in “1989’s” first week, huge numbers for 2014’s music climate. In Week 2, which was tallied on Wednesday, Swift moved another 400,000-plus units, easily finishing atop the charts again.

Also read: Spotify CEO to Taylor Swift: The Pirates Are Going to Get You

1. Make a great debut single
“Shake it Off” is a catchy pop song with a danceable beat — and that’s where it all begins, Williams told TheWrap. There is no shortcut. No artist — no matter how popular — is going to move millions of records in today’s music climate if the content is garbage.

2. But don’t forget the rest of the album
Lead single “Shake it Off” will stay in your head for days, but if the rest of the album sucked, “1989” wouldn’t have sold well over a million copies in its first week. Rather, there would have simply been a ton of purchased singles — one-offs — not that there aren’t also strong solo sales figures.

The lesson here: Don’t forget the rest of the tracks if you want to be certified platinum in 2014. Just ask Lady Gaga how her full ARTPOP album sales went after “Applause” hit the airwaves. Spoiler alert: not well.

3. Timing is everything
Williams says if you have a great single, release it 6-10 weeks before the album is slated to come out. That lead gives radio plenty of time to get the ball rolling, but doesn’t completely kill the momentum.

“Really over that first couple of weeks, you know whether or not you’ve got a record,” Williams said.

Swift’s album release date was set in accordance to leverage other non-radio platforms for exposure, including the VMAs, the CMAs and seemingly a dozen subsequent announcements that set Swift up to perform on virtually every other coming major awards show or TV special.

4. Be fan friendly
“She always tactically, strategically focused on her relationship with her fans,” Williams, who worked with Swift eight years ago on the TV show “Fresh Crops,” Music Choice’s new and emerging artists presentation, told us.

“Nothing is more important than your direct relationship with your fans,” he added, citing current-day’s digital, social environment. “You establish value with your fans.”

As a result of listeners wanting a tangible piece of her, Swift’s ratio of physical CD sales to digital sales is far larger than most artists. Though it helps to have a great deal with Target.

She also created hashtag #taylurking to tell her fans — the “Swifties” — that she is watching what they’re doing, and retweeted almost anyone who posted a picture of them with her album.

6. Make others work for you
Aside from the ones she feuds with and the boyfriends she’s broken up with, Swift has a lot of friends in the music business. Some might surprise you.

Rapper Kendrick Lamar couldn’t stop singing “Shake It Off,” something that led to the hip-hop star publicly freestyling over the beat. Naturally, that went viral, and exposed Swift’s music to rap fans.

7. Working with the best
Taylor Swift‘s label is Big Machine Records, whose parent label is Universal Music Group. The latter houses an enormous marketing machine that knows how to sell and perform stunts that keep a fan base engaged.

“She’s always done an amazing job with giving you something else with her CD,” Williams explained of the “picture perfect” marketing job he said Swift’s team did.

Speaking of pictures, the physical version of “1989” came with several different packages of Polaroid-style photos of the artist, something to send the most loyal Swifty into a tizzy.

8. TV is the future
OK, so really, TV is the present — and really, kind of the past. But still, pretty, affable girls do well on visual mediums. So, check and check.

In case you missing it, Swift was everywhere on the small screen: She shut down Hollywood Boulevard on “Jimmy Kimmel Live,” handing the show big ratings. She was on “Ellen,” “Good Morning America” (twice), “The Voice” (twice), — the list goes on and on.

Beyonce is the only other artist who has successfully tapped into what Williams hails as “the power of women,” and we saw how well that worked out for her last year.

Females 13-49 love the messages in their songs, he added. That said, Beyonce still has a hardcore urban base that Swift will never have, and Swift has the hardcore country fans that Beyonce won’t get either. But that segmentation does both just fine.

“Taylor’s probably where Beyonce — I’m talking about in terms of age and maturity — was a couple of albums ago,” Williams said.

10. Country Strong
Swift actually set the table for country pop over her last couple of albums, Williams said — a wise longterm evolution if you want to move big numbers.

“Theres not as much resistance from the country world as there was years ago to going pop or being pop,” he said. “I think you see it across the board in country artists that are able to maintain their core audience but move into the pop echelon.”

11. Shirk Spotify
Of Swift removing her music from streaming service Spotify, Williams said: “It makes a difference more importantly with the casual and new fan.”

He added that not making the record available not only sent a message and created buzz, but forced demand and removed one main streaming artery from the free supply.

That said, Spotify CEO Daniel Ek thinks that move will backfire in the end, and that fans will find a way to get her album for free — even if that means turning to piracy.

Time will tell how that newest marketing move in the digital age plays out over the long run. Should it backfire, we’re guessing Swift will just “shake it off.”

Watch that video, and Swift’s even newer “Blank Space” video below: