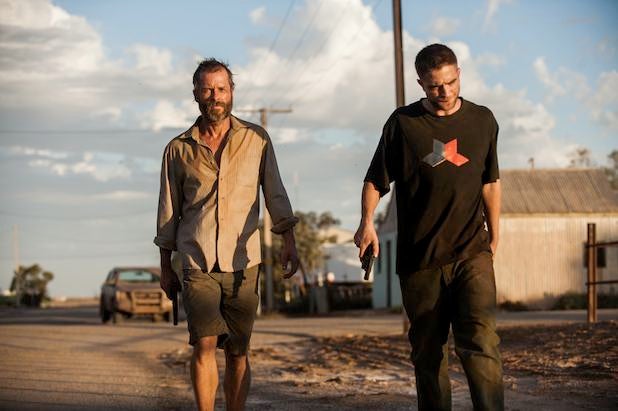 Robert Pattinson continues his quest for recognition outside the “Twilight” franchise in bleak apocalyptic thriller “The Rover” this weekend, and critics are mixed as to whether or not he completely pulls it off.

The R-rated movie, directed by David Michod, has scored a majority of positive reviews on critic aggregator Rotten Tomatoes, which currently grades the movie as 67 percent “fresh” after counting 48 reviews.

Set in the Australian Outback “10 years after the collapse,” Guy Pearce (“Memento”) takes the lead as a survivor whose car is stolen by a gang of thieves led by Scoot McNairy (“Monsters”), while Pattinson plays McNairy’s brother, left for dead along the dusty road. Pearce and Pattinson’s forge an unlikely alliance as they journey to track down the men responsible for their woes.

TheWrap‘s Steve Pond praised the film as “a brutally brilliant and brilliantly brutal post-apocalyptic road movie” after it premiered at the Cannes Film Festival earlier this year. Wrap critic Diane Garrett shared similar sentiments in her review, and complimented Pattinson for his portrayal of Pearce’s “half-wit” sidekick.

“Pattinson does a commendable job moving beyond his sparkly-vampire period, especially in a heart-wrenching scene with McNairy, but the movie really belongs to Pearce,” Garrett wrote. “He conveys his character’s deep despair over society’s anomie, crying out that a lost life should mean something, while at other times his eyes tell you everything you need to know about the character and what he’s seen.”

Also read: ‘The Rover’ Review: Robert Pattinson and Guy Pearce Both Need a Shower After the Apocalypse

Los Angeles Times critic Kenneth Turan joined the praise for the film featuring Pattinson “convincingly” stepping out of his teen idol shoes to take a dirty and bloody ride through the Outback.

“Masterfully brought to life by Guy Pearce in a performance of pure controlled ferocity, Eric and his implacable, obsessive, stop-at-nothing quest to recover his stolen vehicle is the centerpiece of David Michôd’s tense and remorseless ‘The Rover,’ a film shot in 100-degree-plus heat that chills the blood as well as the soul,” Turan wrote. “Pearce’s willingness to give [his character] an integrity of purpose mixes well with Michôd’s intense, controlled direction and his ability to blend unexpected, empathetic character moments with all the killing. It’s a combination that all but guarantees that ‘The Rover’ will put you away.”

“[Pattinson] appears to have picked the role precisely because it will send his ‘Twilight’ fans screaming out of the theater. As the bumbling, guileless Rey, Pattinson has allowed the makeup crew to rot his teeth; when he smiles, his incisors get stuck on the corners of his mouth and hang there like limp socks,” Nicholson wrote. “If his playing a mentally handicapped role here is a desperate stunt, he mostly lands it … He makes Rey a person, not a cliché, and arguably more of a complex character than Pearce’s angry hard-ass.”

Vulture critic David Edelstein was also impressed by Pattinson’s “full retard” approach, but wasn’t entirely convinced in its validity, and wasn’t fond of the overall film, either.

“‘The Rover’ is the handiwork of Aussie David Michod, whose overpraised 2010 ‘Animal Kingdom’ was memorable chiefly for the nightmarish mother-son tag-team of Jacki Weaver and Ben Mendelsohn. This one is even darker — but also sillier, easy to watch at arm’s length and easier to shake off. It’s overbaked art-pulp,” Edelstein wrote. “Pattinson’s hair is shaved to the skull and his teeth artfully mottled. His diction is American Deep-South mush. He’s not convincing, but I’m impressed that he’s willing to go, as Kirk Lazarus in ‘Tropic Thunder’ would say, “the full retard.'”

Rolling Stone critic Peter Travers had nothing but kind words for both Michod’s “brilliantly rendered” vision and his stars’ performances.

“All you really need to know is that ‘The Rover’ is a modern Western that explodes the terms good and evil; that its desolation is brilliantly rendered by Michôd and cinematographer Natasha Braier; that Pearce and Pattinson are a blazing pair of opposites,” Travers wrote. “Pattinson, free of the ‘Twilight’ trap, shows real acting chops, especially in a moving final scene. In revealing two men trying to get in touch with the shreds of their shared humanity, Michôd offers a startling vision. You’ll be hooked.”

New York Times critic A.O. Scott sided with the 33 percent minority who were not particularly fond of the latest take on a familiar genre, for one reason or another.

“[Michod] demonstrates once again that he has a knack for violence and suspense. (The sound design in particular is brilliantly sinister.) But he can’t find much of interest beyond the puffed-up, stripped-down glumness that is this genre’s default mood,” Scott wrote. “There is both too much story and not enough. The contours of this desolate future are lightly sketched rather than fully explained, which is always a good choice. But that minimalism serves as an excuse for an irritating lack of narrative clarity, so that much of what happens seems arbitrary rather than haunting.”