Legendary race-car driver Niki Lauda, whose rivalry with fellow driver James Hunt is the subject of Ron Howard‘s propulsive drama “Rush,” told TheWrap on Monday that Hunt, who died in 1993, would have been delighted to seemovie about the drivers’ fierce 1976 battle for the Formula One championship.

“A movie about him? He would have loved it,” said Lauda, who flew to Toronto on Sunday for the film’s TIFF premiere and had to return to Europe on Monday afternoon.

The film contrasts Lauda’s straight-laced Type A personality and drive to succeed with Hunt’s more gregarious, party-hearty manner — differences that were exacerbated in the ’76 season, when Lauda took a big lead in the Formula One season competition, only to lose it to Hunt after being horrifically burned in an accident. He shockingly returned to the driver’s seat weeks after the crash, leading to a final-race showdown between the two competitors.

“That’s one thing I feel bad about, that James isn’t here to be part of this,” said Lauda. “Because I know how much he would have enjoyed the whole thing.” 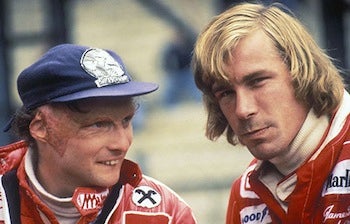 At the TIFF premiere, Lauda added, he was approached by one of Hunt’s two sons, whom he’d only met once before.

“I don’t know how old he was when James died,” said Lauda, “but he came up to me last night and said he’d like to sit down with me so that I could tell him more about his father.”

Lauda consulted with screenwriter Peter Morgan, and was also available to actor Daniel Bruhl, who played him, and to the filmmakers when during shooting they had questions like, “which do you put on first, your helmet or your gloves.” His answer to that one, he recalled with a grin: “you idiots — you have to put on your helmet first because you can’t snap it closed if you have your gloves on.”

As for Bruhl, the actor said that the only time he felt a Lauda-Hunt style rivalry with Chris Hemsworth, who played James, came when he had to be on the set extra early to undergo hours of prothetic makeup for scenes that take place in the aftermath of Niki’s crash.

He laughed. “I think they did it that way so I could understand my character.”