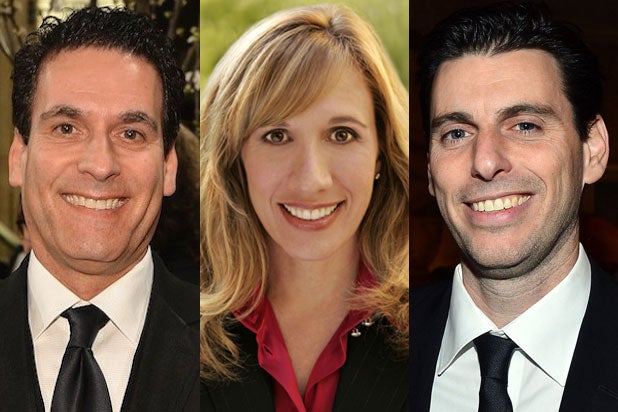 In a matter of months, Hollywood has seen the closest thing to a clean sweep of top studio marketing executives the likes of which hasn’t happened in recent memory.

Last week’s ouster of Oren Aviv (top photo at left) from Twentieth Century Fox was only the latest in a rather astonishing series of firings at Hollywood’s movie studios:

But now Sella, one of those hard-to-find talents, is apparently going too. What gives?

Also see: We Staffed a Whole Movie Studio With Ousted Executives – And It’s a Dream Team

Here’s what’s interesting: none of the fired executives was a novice.  And despite recent stumbles, they all have many years of successful campaigns under their belts, including Weinstock’s rather brilliant “Zero Dark Thirty” campaign last year and Fogelson’s oversight of the lively “Despicable Me.”

Moreover, it’s not as if they are all being replaced by a new generation of forward thinkers. Yes, at Sony Weinstock was replaced by the talented digital marketer Dwight Caines. But at Fox, whose focus is increasingly on global dollars, international experts Paul Hanneman and Tomas Jegeus were brought in. Former Warner Bros honcho Dawn Taubin came in to replace Globe, and Relativity’s Schwartz is an old hand from the 1990s, when New Line was redefining indie film.

So what’s behind the change? Hollywood is famous for habitual dumping on marketing departments when things don’t go well.

“Marketing is always the most exposed position at the studio,” David Weitzner, a faculty member at the USC School of Cinematic Arts and the former worldwide marketing president for 20th Century Fox and Universal Pictures, told TheWrap last week.

“I always believed part of my salary was hazard pay,” he said. “No matter how much you spend, if the film works, it was a marvelous and brilliant production. If it didn’t, it was bad marketing. It’s a studio’s mentality to never deal with the fact that it made a bad film.”

That’s certainly true. Someone has to be made to pay when big movies don’t perform. (Though I’m still mystified why Sony’s Steve Elzer had to take the fall.)

There’s something else afoot. The mass firings are a sign of the industry’s general nervousness about the state of the business. The mostly-tentpoles strategy of the major studios is a high-stakes game that puts marketing in an even more exposed position than before. Even a smaller studio like DreamWorks Animation finds itself betting big on marketing with only a few movies a year.

If the firings were to lead to the rise of a new set of executives filled with fresh ideas and fresh blood, it would be a rational choice for change at a pivotal time for the studios. But more likely we’ll see a game of musical chairs, especially since the expertise for marketing movies is so terribly specific.

Is the firing spate over? It seems to be. Warner Bros has a team led by Sue Kroll that is defying, er, box office gravity with “Gravity.” But with this weekend’s dead-on-arrival opening by Disney of the DreamWorks film “The Fifth Estate,” despite a constant barrage of TV spots, is marketing chief Ricky Strauss in trouble? I’m reliably told by internal sources that Strauss is entirely safe, with the upcoming “Frozen,” “Thor 2” and “Saving Mr. Banks.”

Still given the current mood in this town, he’d do well to watch his back.