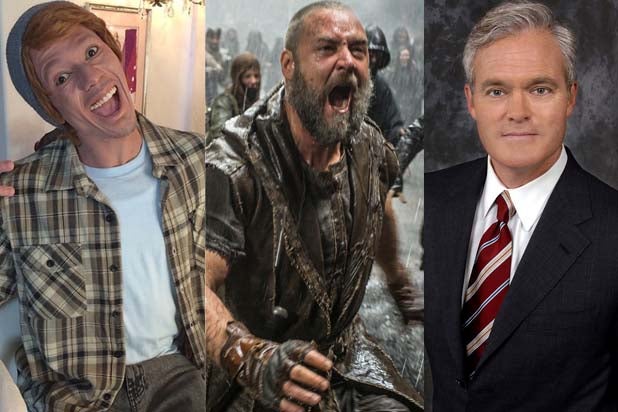 Who Has TV Greenlight Power in Hollywood? A Broadcast Network Guide
From NBC to PBS, here’s who decides what you watch.

How Vine’s Biggest Female Star Brittany Furlan Is Building a Career – One 6-Second Video at a Time
“Honestly, if I took every job I’m offered, I could be a multimillionaire right now, but I don’t want to flood my Vine with content,” Furlan told TheWrap.

The Most and Least Liked TV Newscasters – From Scott Pelley to Chris Matthews
The latest edition in TheWrap’s Q Score series reveals MSNBC’s “Hardball” host is ranked dead last among his media peers and Photos: 24 TV Newscasters Ranked by Popularity

Why Net Neutrality Matters So Much to Indie Filmmakers
Indies are competing with Comcast and Netflix for online access and revenue.

‘Noah’ vs. ‘God’s Not Dead': It’s David and Goliath at Box Office
Will “Divergent” hold? Can “Grand Budapest” keep rolling? Will Arnold end his skid? We’ll find out this weekend.

‘Walking Dead’ Season 4 Finale Pushes Rick to ‘the Absolute Limit,’ Says Producer (Exclusive Photos)
Take a moment to remember the characters (those that mattered and didn’t at all) who lost their lives this season.

5 Burning Questions Before the Cannes Lineup Is Revealed
Festival programmers are assembling a slate that could bring Angelina, Meryl and Woody to the South of France.

Nick Cannon Wears Whiteface, Calls Himself ‘Connor Smallnut’ for ‘White People Party Music’ (Video)
The “America’s Got Talent” host is releasing an album under the guise of his alter-ego.

We Must #CancelColbert – And by the Way, Look How Not-Racist I Am
I‘m so non-racist I even think non-racists are racist.

6 CinemaCon Takeaways: Fewer Blockbusters, More Raunch and What About the Kids?
CinemaCon 2014: 3D, once a star of the annual trade show, has lost its sparkle.

Jimmy Fallon and Arnold Schwarzenegger Goof Off in a QVC Spoof (Video)
The “Tonight Show” host and his guest made what may be the most elaborate set-up for a single joke in recent late night memory.

Lindsay Lohan Protests ‘How I Met Your Mother’ Finale by Hammering It Up (Video)
Lohan expresses her displeasure over end of “Mother” by smashing up a car.