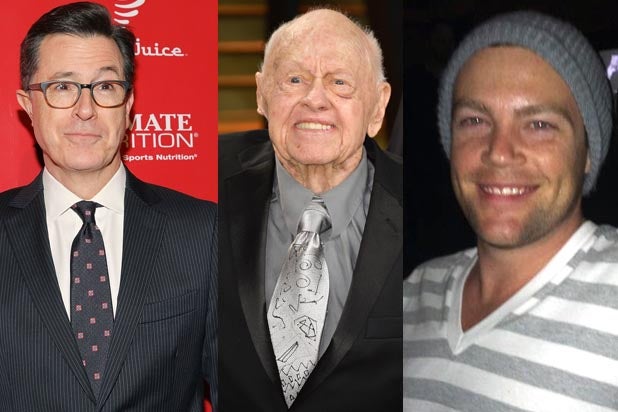 Stephen Colbert to Replace David Letterman as Host of CBS’ ‘Late Show’
Letterman is “very excited for him,” but he’s probably a little bummed that his production company, Worldwide Pants, has no stake in the show after he leaves in 2015. Here’s why Colbert is perfect for “The Late Show.”

How Stephen Colbert Got the ‘Late Show': Nina Tassler Says Talks Started Right After Letterman Announced Retirement
According to CBS CEO Les Moonves, Colbert was the “only logical successor.”

‘God’s Not Dead’ Isn’t Going Away, and Neither Are Faith-Based Films
The Christian indie film has held strongly for two weeks, and more movies about God are coming soon.

‘Wolf of Wall Street’ $25 Million Defamation Case: Producers Say More Than One Toupee Involved
Character of “Rugrat” was a composite.

‘The Following’s’ Shawn Ashmore on Season 2: ‘There’s a Lot of Thrills Coming Up’ (Video)
The actor, who also stars in “X-Men: Days of Future Past,” joined TheWrap for some food in the newest episode of “Dining with the Stars.”

Hillary Rodham Clinton Dodges a Shoe Thrown by Heckler (Video)
A closer look reveals the shoe actually missed her first. Clinton’s gotta step her game up in the reflex department.

‘Girl Meets World’ Releases First Heartwarming Teaser With Ben Savage, Danielle Fishel (Video)
Cory and Topanga appear to have grown up into a pair of loving and responsible parents, with a mischievous daughter who has to make the world her own. Awwww!