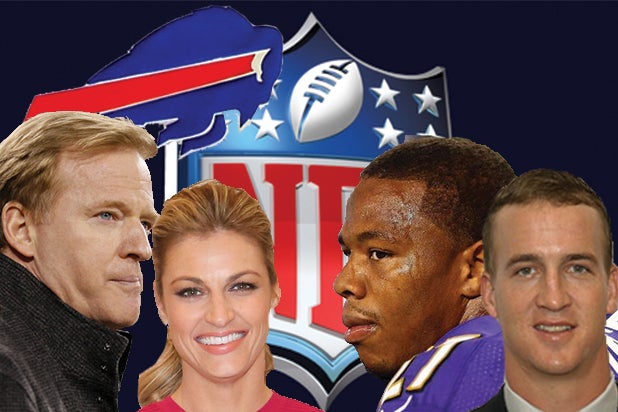 It’s been a hell of an opening week for the National Football League.

Yes, Ray Rice’s elevator assault video and League criticism has dominated the news, from sportstalk radio to all corners of social media. But there have been some positives, though they’ve been potentially buried under domestic violence and an alleged cover-up scandal.

For those, one can start with the Nielsen ratings sheets — but it doesn’t end there. The first seven days of the season will also see a major new TV property launch, a huge new studio, bonus football and a new face strolling Fox’s sidelines.

TheWrap took a look at these tumultuous days in an attempt to prove that it wasn’t all bad.

1. The NFL is still huge, just ask NBC
On Sept. 4, the 2014 NFL season kicked-off with the Super Bowl Champion Seattle Seahawks toppling the Green Bay Packers. That special non-Sunday version of NBC’s “Sunday Night Football” — not to be confused with CBS’ “Thursday Night Football” — pulled in 26.9 million viewers, the third-best viewership in the event’s 13-year history.

The slight uptick from last year — despite the game being a modest blowout — was the most-watched TV show since March’s Academy Awards (43.7 million viewers).

Plus, NBC’s “Football Night in America” presentation in its normal Sunday slot continued to pace as the primetime’s No. 1 show. The Fox game and postgame shows that ran into primetime on Sunday did its usual damage to the Nielsen ratings sheets, and the gridiron sport crushed all comers during the day.

This time around, the Dallas Cowboys defeat at the hands of the San Francisco 49ers, scored a 15.7/31 rating/share and 28.0 million viewers, re-breaking that aforementioned most-viewers-since-Oscars record.

As a matter of fact, the top eight slots on this week’s Top 20 primetime broadcasts were all NFL programming — and that doesn’t even count the “Monday Night Football” doubleheader.

While CBS didn’t have any primetime games, its midday football did just fine on Sunday. Plus, they’ve got a secret weapon debuting tonight — but we’ll get to that a little later.

3. And ask ESPN, too
“Monday Night Football” easily claimed the No. 1 and No. 2 spots across all of TV — counting cable and broadcast — on Monday night, though the ESPN opener was down from last year.

Not bad for a bad week.

4. Hey everyone, ESPN has a shiny new toy!
Plus, the self-proclaimed “Worldwide Leader in Sports” launched its new NFL studio — a 9,000-square-foot state-of-the-art monstrosity — on “Sunday NFL Countdown” for Week 1.

The Bristol, Conn. NFL studio is so big that its actually larger than the new “SportsCenter” studio — and that’s huge.

5. Fox’s new sideline reporter is already a fan favorite
Another Fox highlight was its debut of Erin Andrews with the network’s No. 1 sportscasting team, reporting on the sidelines for Joe Buck and Troy Aikman. Andrews has model looks and 2.3 million Twitter followers, which appears to have been bad news for Pam Oliver.

6. A bad team just sold for record money — and not because their owners are racists
The Buffalo Bills sold for more than $1 billion — a record price for an NFL team. Terry and Kim Pegula, owners of hockey’s Buffalo Sabres, ponied up the sum.

That’s a pretty good amount, considering the small market struggling team actually ranked No. 31 out of 32 NFL franchises with an estimated value of $935 million, per Forbes.

Plus, unlike the NBA’s Los Angeles Clippers and Atlanta Hawks, the team wasn’t forced to sell due to offensive remarks by its current owner.

7. Extra pigskin!
The only thing better than football, is bonus football.

The NFL’s Week 1 featured two overtime finishes — the Atlanta Falcons over the New Orleans Saints 37-34 and the previously mentioned Bills over the Chicago Bears 23-20 — the most contests to go into extra time on Kickoff Weekend since 2002.

8. Manning sets another mark
Peyton Manning’s victory over the Indianapolis Colts allowed him to join Brett Favre as the only two quarterbacks to defeat all 32 NFL teams. Think about that for a second — that’s a pretty incredible feat and good company to be in.

Plus, Manning’s Broncos’ victory coupled with Seattle’s kickoff win are disproving the Super Bowl hangover theory — at least one game into a fairly long season.

9. Football on Thursday nights!
All that news, and the week was just getting started!

On Thursday, CBS’ new much-ballyhooed property, “Thursday Night Football,” will debut on the country’s most-watched network. And guess who is playing? Yep, Ray Rice’s old team, the Baltimore Ravens. Plus, they’re playing their bitter AFC North rival, the Pittsburgh Steelers. As if CBS needed promotion for .

Of course, a CBS Sports spokesperson told TheWrap that they never predict ratings.

On the coincidental scheduling, CBS told us that they intend to spend the first half hour of the Thursday event covering the Rice news story. Beyond that, the CBS spokesperson reiterated that they never tell their on-air broadcasters what to say or cover.

Then, there is the Bad & the Ugly:

1. Ray Rice, ’nuff said
With great power comes great responsibility though. So when one of the biggest stars in unarguably the biggest game in America gets caught on video physically assaulting his wife, the world takes notice. But does the NFL?

On Monday, new video footage surfaced of Baltimore Ravens running back Ray Rice striking his then-fiancée Janay unconscious inside of a hotel elevator during a physical argument back in February.

2. To Tell the Truth, or not
The NFL suspended Rice indefinitely after the video went public, claiming this was the first time they had seen the unsettling tape. But the source of the video, TMZ, claimed the league knew about this footage months ago and did nothing about it.

3. Everybody’s talking…
Criticism of the NFL and Roger Goodell’s handling of the situation abounded, including harsh words from former players, sports agents and media figures.

4. Are you ready for some soccer?!
The NFL hasn’t even hosted a regular season game at their newest venue, San Francisco’s Levi’s Stadium, but feedback this week after a Chile vs. Mexico soccer game was filled with plenty of negative reviews.

5. Then came the movie stars
Upcoming concussion film “Game Brain” added another big name to their cast on Tuesday. Albert Brooks will join Will Smith and Alec Baldwin in the movie that hopes to shed further light on the NFL’s chronic problem with player head injuries.

6. Nobody likes a blackout
And with the TV ratings war definitively conquered by the NFL, FCC Chairman Tom Wheeler scolded the league on Tuesday in a USA Today op-ed piece, telling them their television blackout policy hurts loyal fans.

Also read: Redskins Firestorm: How the TV Networks Will Handle the Name Controversy

Since 1975, the NFL has banned local TV broadcasts in any markets where a game has not been entirely sold out.

Last season for instance, Packers fans, who have sold out every home game since 1959, came close to not being able to see their team take on the 49ers in a January playoff game with a pre-kickoff forecast of minus-15 degrees. At the last minute, a local business stepped in and bought blocks of tickets, allowing those at home to watch the game without going to Lambeau to freeze.