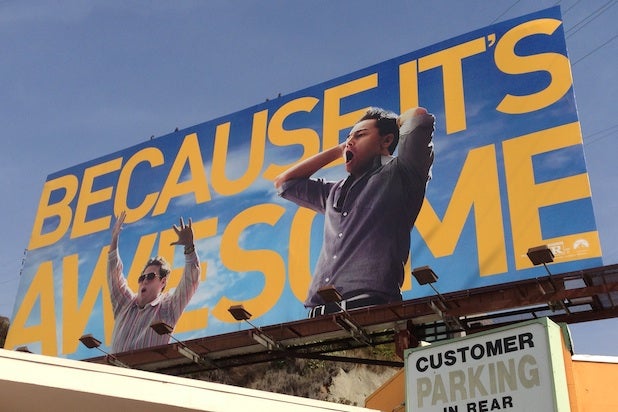 For the Oscar-contending movies, it’s never too late to make a last impression.

And that last impression could be key in a year like this one, with three films seemingly fighting it out for the Oscar Best Picture award while several others dream of staging an upset.

For the second consecutive year, campaigning has been feverish and expenditures large in the final weeks of the race. One veteran of the Oscar wars estimates that this could be the most expensive year ever, citing not only the lavish spending on behalf of the Best Picture frontrunners, but campaigns like the one for “Despicable Me 2,” which received animated-feature and original-song nominations.

And unlike last year, there is no clear frontrunner. That means that studios aren’t just fooling themselves the way they were a year ago, when the fact that the Academy’s Directors Branch didn’t nominate Ben Affleck allowed rivals to persuade themselves that “Argo” might be beatable. (It wasn’t.)

This year, “Gravity” and “12 Years a Slave” appear to have the best chances to win, with “American Hustle” a close third – but nobody really knows, hope springs eternal and the Oscar campaigns have barrelled into the homestretch looking to make a big impression in the final week of voting, even if it takes millions more dollars to do so.

So here’s a look at the messages that Oscar campaigners are putting out there in the final days of voting, and what they really mean.

Movie: “12 Years a Slave”
Message: You can make history.

Steve McQueen‘s wrenching drama won raves (and a few cries of “the race is over!”) out of the Telluride and Toronto film festivals, but it shunned frontrunner status and played things low key in the ensuing months. That seemed to hurt the film’s awards profile to some degree, although the damage was hardly fatal: At both the Golden Globes and BAFTA, it lost in one category after another before pulling out surprise best-picture wins.

And now that it’s time to get really, really serious, Fox Searchlight is playing the history card. The tagline in the latest batch of “Slave” ads is simple: “It’s time.” Time, presumably, for cinema to face the subject of slavery. Time for a film directed by a black man to be named Best Picture. Time for a landmark win.

The tricky thing is that Oscar voters don’t like being told what they should vote for — and in recent years, when given the choice between tough but critically adored (“The Social Network,” “Zero Dark Thirty”) and more mainstream and crowd-pleasing (“The King’s Speech,” “Argo”), they’ve gone for the latter.

If the campaign strikes voters as being a little too heavy-handed, it could hurt. But those Globe and BAFTA wins show that voters can be swayed by the idea of making an historic choice, so the ads are laying it on the line.

It’s by far the biggest moneymaker of the nominees, the most spectacular technical achievement, the film for which Alfonso Cuaron appears to be the odds-on favorite in the Best Director race. But the problem for “Gravity” is that if voters see it as simply a dazzling technical accomplishment, they’ll give it lots of craft awards (visual effects, cinematography, film and sound editing) and figure it’s too much of a popcorn movie to warrant the big prize.

Warner Bros. doesn’t want to ignore the film’s tech constituency, which it will need to win. But they also want to point out that the film is an emotional journey – so in the latest ads, they play up both angles, when they aren’t borrowing a page from WB’s “Argo” playbook and simply reminding everybody of how much the film has already won (above).

(Note: if you haven’t seen the movie, the paragraphs below contain a spoiler.)

Full-page ads in last Sunday’s New York Times and Los Angeles Times, for instance, featured four images. The top one showed Sandra Bullock strapped into a harness in the “lightbox,” the special-effects rig in which she had to do most of her acting; below that was a still from the film of Bullock in the fetal position, showing the emotional image that resulted from that awkward filming process. Below that was an on-the-set shot of Bullock, Cuaron and George Clooney – and at the bottom of the page was the most startling image of all, a shot of Bullock lying on the wet sand of Earth in the final scene of the film.

For those who haven’t seen the film, the ad gives away the ending – but if you have, as most voters no doubt have, the image is from a very human and literally down-to-earth moment in the film, playing up that this isn’t just a cold space adventure but the story of a quest to get back home.

A more recent ad features just the shot of Bullock on Earth, doing away with the space shots entirely — and a television special that ran in Los Angeles and was made and paid for by WB went even further, showing much of the footage from the end of the movie.

The campaign simultaneously emphasizes the degree of difficulty by being more open about the process, and plays up the human side to show that it’s not just a technical achievement. Can WB and “Gravity” have it both ways?

Unlike the homestretch campaign for David O. Russell’s “Silver Linings Playbook” last year, which took a film that had won a string of awards for comedy and suddenly repositioned it as a serious drama about mental health issues, “American Hustle” hasn’t really come up with a new message for the final weeks of the campaign.

Instead, Sony’s current ad blitz is similar to what the studio has been running since nominations came out: Reminders that the film has 10 nominations and that it is critically acclaimed, with quotes like “It will rekindle your faith in movies.”

(After the kind of year this has been, did anybody need their faith rekindled?)

Instead of the iconic image of the five main cast members in a row, which keynoted the first part of the campaign, the new ads focus on film stills of the four nominated cast members, sometimes by themselves but often in two-shots to play up the shifting relationships in the movie. There’s Christian Bale and Amy Adams, Adams and Jennifer Lawrence, Adams and Bradley Cooper, Lawrence and Bale … In most of the shots, faces are close together and the energy is palpable.

The ads – and the half-hour TV special that aired in Los Angeles on Monday – seem to take their cue from the talking points with which Russell begins nearly every interview: I made this movie because I love these characters, and their quest for reinvention and survival. And the campaign lays it out there for voters to love, as well: These are the people of our film, in all their wonderful permutations.

Bigger. Bolder. Louder. That describes the movie, Martin Scorsese’s three-hour bacchanalia of sex, drugs and financial misdeeds, and the ad campaign takes its cue from the film. In last Sunday’s L.A. Times, for instance, the other films had full-page or half-page ads; “Wolf” had a two-page spread, with big words spelling out “THE WOLF STANDS ALONE” across a photo of Leonardo DiCaprio.

That bold, in-your-face approach is the strategy everywhere, including a Sunset Strip billboard (above) that doesn’t even mention the name of the movie, but simply features a photo of DiCaprio and Jonah Hill and the enormous words “BECAUSE IT’S AWESOME.”

On the circuit, meanwhile, Scorsese and DiCaprio have been inseparable and inescapable, with joint appearances and tributes and Q&As to remind voters over and over that this is the culmination of their five movies together. But really, that side of the campaign has taken a backseat to a simpler, louder message: Vote for us because we’re awesome.

Also read: What Glorifying? Everything in ‘Wolf of Wall Street’ You’d Never, Ever Want to Do

If Scorsese and DiCaprio have been inescapable, you could say the same about an 80-year-old Irish woman who, according to the film “Philomena,” was astounded by things like hotel bathrobes and breakfast buffets the first time she came to America in search of the son she’d given up for adoption five decades earlier.

In truth, Philomena Lee found her son without leaving Ireland – but she’s gotten quite used to hotels this Oscar season, with the Weinstein Co. using her as an ace-in-the-hole at press days, parties, screenings and events like the Oscar Nominees Luncheon and a ceremony in her honor at Los Angeles City Hall.

Since she’s not technically a nominee, Lee isn’t subject to the same Academy restrictions as others involved with the movie, and Weinstein publicists have been quick to share her every exploit, including a recent meeting with Pope Francis. Of course, that spurred a Catholic website that has been relentless in its attacks on the movie to point out that Lee was actually denied a meeting with the pope, and was only one of a large group of people who shook his hand over a wall during a general audience open to the public.

Weinstein has also done its best to paint “Philomena” as a dark horse waiting to stage an upset, just as it did when it landed a Best Picture nomination. Last weekend, TWC used a print ad with a quote that talked about the film’s Oscar chances rather than its quality: “Could ‘Philomena’ be the spoiler in this year’s Oscar race? Don’t rule it out.” The message wasn’t “see this movie,” the message you’d expect for an ad in a consumer publication, but “if you vote for it, you won’t be wasting your vote.”

(Of course, the person who wrote the quoted line, the Hollywood Reporter’s Scott Feinberg, doesn’t really believe that his blurb-friendly line is going to come to pass, since  he has the film ranked a distant fifth in the Best Picture race in his predictions at Goldderby.com.)

Movie: “Dallas Buyers Club”
Message: Our actors did the most.

The Academy has always liked actors who undergo physical transformations in the service of their roles, and the dramatic, near-40-pound weight loss of “Dallas Buyers Club” actors Matthew McConaughey and Jared Leto definitely qualifies. So without coming right out and reminding everybody of how much weight McConaughey and Leto lost, Focus Features’ campaign has taken transformative as its keyword.

“The year’s two most TRANSFORMATIVE performances,” read the headlines on a number of ads, while others advertise a McConaughey Actors Fund event entitled “Matthew McConaughey: Transformations.”

The message is clear: Our guys went the extra mile. And the ads also remind voters that McConaughey and Leto have already won a number of previous awards, because everybody likes to back a winning team.

Movie: “Nebraska”
Message: It’s time to recognize Bruce Dern — and to embrace the Bruce Dern in all of us.

Nobody has worked harder this awards season than the tireless 77-year-old Bruce Dern, who did countless wildly entertaining Q&As on his way to only the second Oscar nomination of a career that began in the 1950s.

But in the post-nomination round of voting, no nominee can do more than four Q&As, so Dern’s advantage was nullified as Matthew McConaughey and Leonardo DiCaprio grabbed momentum. Paramount has responded with a late campaign that plays up the unlikely journey of a veteran character actor who finally got to carry a movie. At the same time, the campaign appeals to to every underdog in Hollywood by implying that it’s never too late to become a star.

It’s a lot more succinct than and not quite as enthralling as an hour of listening to Dern’s stories, but it gets the job done.